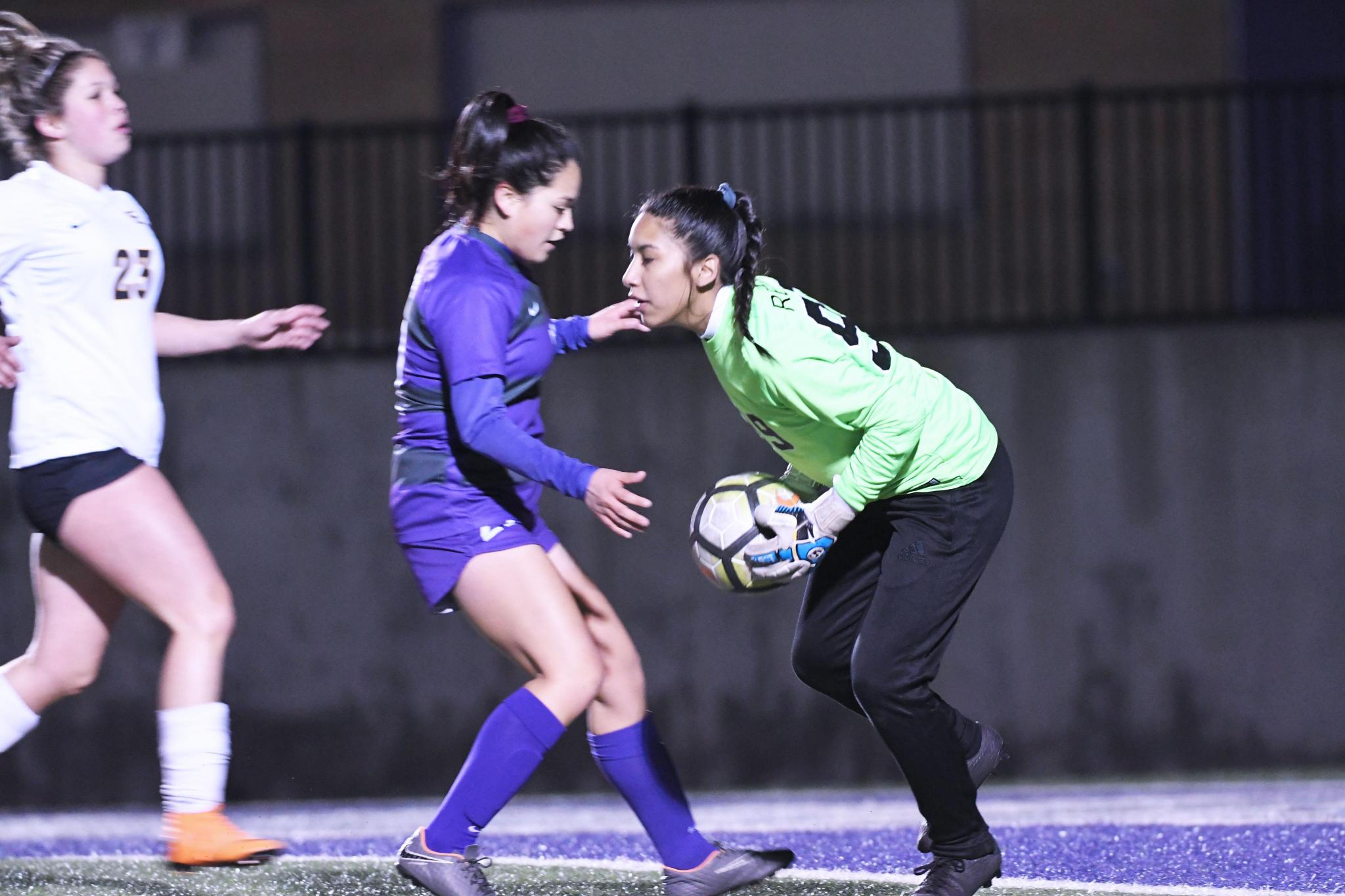 During halftime Friday night, the bright green jersey of San Marcos senior goalie Aubrey Reina could still be found on the field while her team ran in for the 10-minute break.

The senior wanted to keep herself loose for the second half after her defense did a good job containing San Antonio East Central's shot attempts at the net, which kept Reina alone and shivering in the goalie box.

“I asked (head coach Jason Carnley), if I could come out (at halftime) because I was cold, because I didn't get a lot of balls to me,” Reina said. “So I was just like, ‘Can I go work on some stuff?’ That way — second half, usually teams kind of start playing better. And so I wanted to make sure that I was warm and ready for anything that were to happen.”

With 12:36 remaining in the second half, Reina came up with one of the most important stops of the match after the Lady Hornets threatened a goal on a corner kick. Reina caught it in her hands, bobbled it, then gathered herself on one of the visitors' best looks of the night.

Her save prevented East Central from scoring in a 0-0 draw between both teams on Senior Night at San Marcos Toyota Rattler Stadium.

“Most corner kicks are tricky, like when I'm supposed to come out, because there's people everywhere. So I know when to come out but then it's also I don't. And I was pretty confident that I was going to get the ball,” Reina said. “Sometimes I'll fumble the ball but usually by that time, when they see I kind of have control of the ball, they'll kind of back off. So I was pretty confident that nothing was gonna happen.”

“Knowing Aubrey, she just catches everything right away, so I wasn’t worried about it,” Carnley said. “Anytime a ball goes near a goalkeeper, you're gonna be scared for a minute, but I trust (Aubrey) 100 percent and I knew she was gonna clean it up.”

“It’s sad just because you know that it's over, they're done, they're moving on and all you can do is you hope you raised them right,” Carnley said. “I mean like, they're your daughter on the field kind of thing, and in life as well as. I just kind of hope that we do that here in San Marcos, that the stuff that we go through will prepare them in life. And probably stay in contact with them as they go on their journey and just keep in touch kind of thing.

“This is a good group. These girls are recruited since middle school. They’re composed, they're great and got better and better as the season went on and they're gonna be greatly missed when the season goes on. It's going to be very tough to throw these shoes. It's going to be super hard but a great group of girls. I can't say anything bad about them at all.”