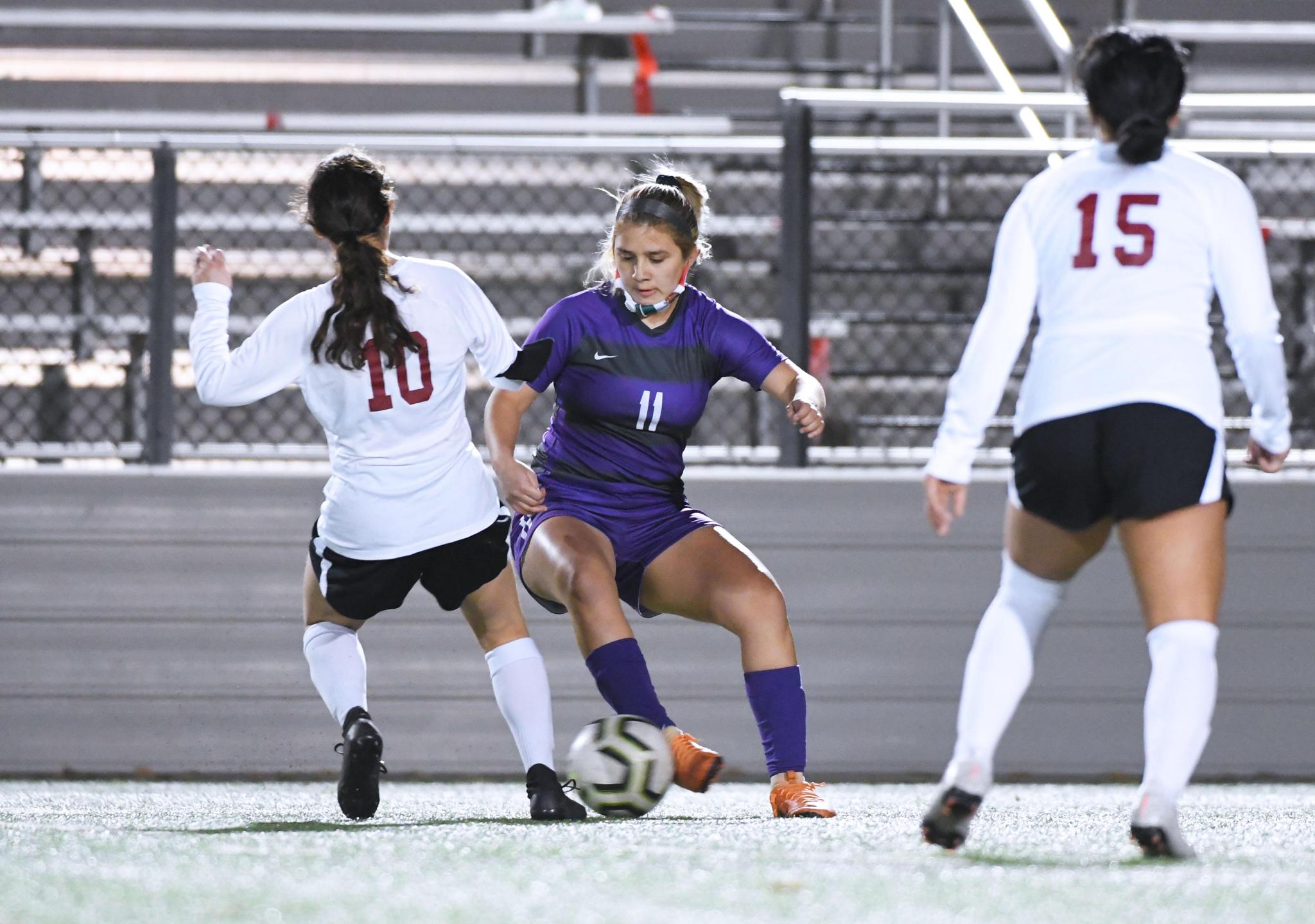 Usually, when San Marcos head coach Jason Carnley starts a player, they play the entire game. But that changed Tuesday when he pulled most of the starters during the first half. They didn’t go back into the game until after the second half had begun.

“I needed to show them that they’re better than that,” Carnley said. “The bench people should be ready to come in and ready to go. They came in and they did it, they shut it down. No goals were scored on them. So I let the starters know, ‘Hey, you want to start, you got to pick it up.’”

It’s all about who wants it more. That’s what is preached to San Marcos before every match. On Tuesday, it was the team’s bench players, as the Lady Rattlers were defeated by the Del Valle Cardinals, 2-0, inside San Marcos Toyota Rattler Stadium.

San Marcos was confident going into the game, considering Del Valle hadn’t won since their first game of the season. Head coach Jason Carnley thought the pace of the game was different compared to the other teams they’ve played.

“I think it was a lot slower than what we’re normally used to,” Carnley said. “I think we came out just thinking, knowing, you know, the team they play, kind of what’s going on, and it kind of got into our heads. I know we’re much better than that.”

The game started out slow, but the action started to pick up seven minutes into the match where the Cardinals (2-5, 1-3 district) had a shot on goal, but sophomore goalkeeper Caitlin Tims came up with the save. Another three minutes went by, and Del Valle nearly got the ball in the goal, but it ended up going out of bounds.

It wasn’t until 20 minutes into the game that the first score was made by the Cardinals. Their momentum picked up and just four minutes later, they scored their second goal, increasing their lead, 2-0. Del Valle had another shot attempt, but the Lady Rattlers were able to hold them off until halftime after Carnley pulled his starters.

During the second half, the Lady Rattlers (5-6, 2-6 district) were putting in more effort. They didn’t get many looks at the goal, but their defense was playing better. The Cardinals had more shot attempts, but none were successful. Tims was a key player during the final half, as she had multiple saves and catches, not allowing Del Valle to score again.

Carnley said that the offense wasn’t moving much and they couldn’t get many shots off, but the major issue his team had was just simply communicating with each other.

“Communication, I think, was the biggest problem,” Carnley said. “Sometimes you come out here and in practice we talk, talk, talk, and when it comes to a game, it’s just kind of like the quietest thing you see in the world and it’s mind-boggling as much as these kids talk to each other.”

The Lady Rattlers are set to face Del Valle again on Thursday at 6:30 p.m. at Veterans Memorial Stadium. Carnley hopes that they can fix their mistakes and turn it around when they see the Cardinals once more. This could potentially mean adjusting the starting lineup.

“I’m gonna watch film, evaluate, figure out who did what and then we’ll change our lineup as we go and find out who’s starting on Thursday.”