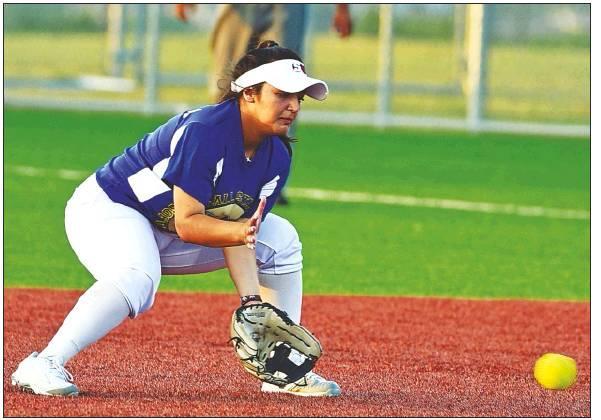 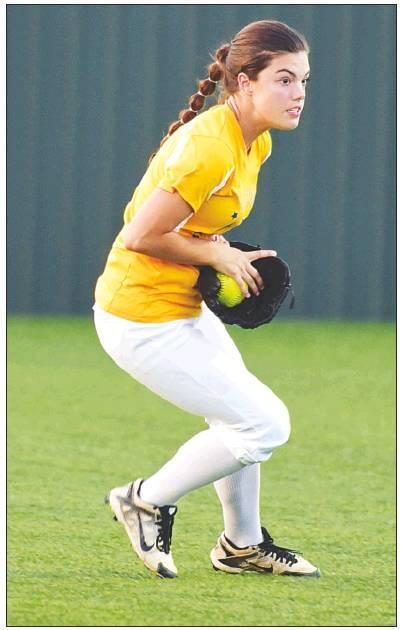 San Marcos Academy’s Becca Baergen tucks a ball in her glove during a play in right field in the FCA All-Star game at San Marcos High School.

The Fellowship of Christian Athletes hosted its first High School Softball Classic at San Marcos High School on Monday with a handful of seniors from the Central Texas area competing one final time.

The selected players were separated into two teams, Gold and Blue. A back-and-forth match that consisted of three lead changes resulted in a narrow win for the Gold team, 9-7.

“It was fun to play one more game on my home field,” recently graduated San Marcos third base Melanie Castilla said. “It was good to know I have coaches and other people not to just play ball with but here to share the word.”

The Blue team jumped on top early with a two-run lead heading into the third inning. But the Gold team strung together a pair of extra base hits to bring in four runs in the third. Both squads battled all night with three multi-run innings put on the board.

Heading into the final inning, the Gold team was on top 8-7. One insurance run was added in the top half before the Blue team came to the plate. The Gold team’s defense stood tall to shut the door and pull off the win to conclude the first Softball Classic.

“(The game) was a lot of fun,” Castilla said. “There were a few girls I had played with before in select so it was fun to play with them one last time. But I also met some new people and played with some new talent so that was really fun.”

Softball aside, Castilla added how important FCA can be for athletes and what it can do for students at the high school level.

“Fellowship of Christian Athletes is really important to me,” Castilla said. “If you’re able to share your beliefs and stuff with the people around you it makes everyone stronger as a team and individuals. Having faith is huge. I think having (FCA) in schools is important to bring people together.”