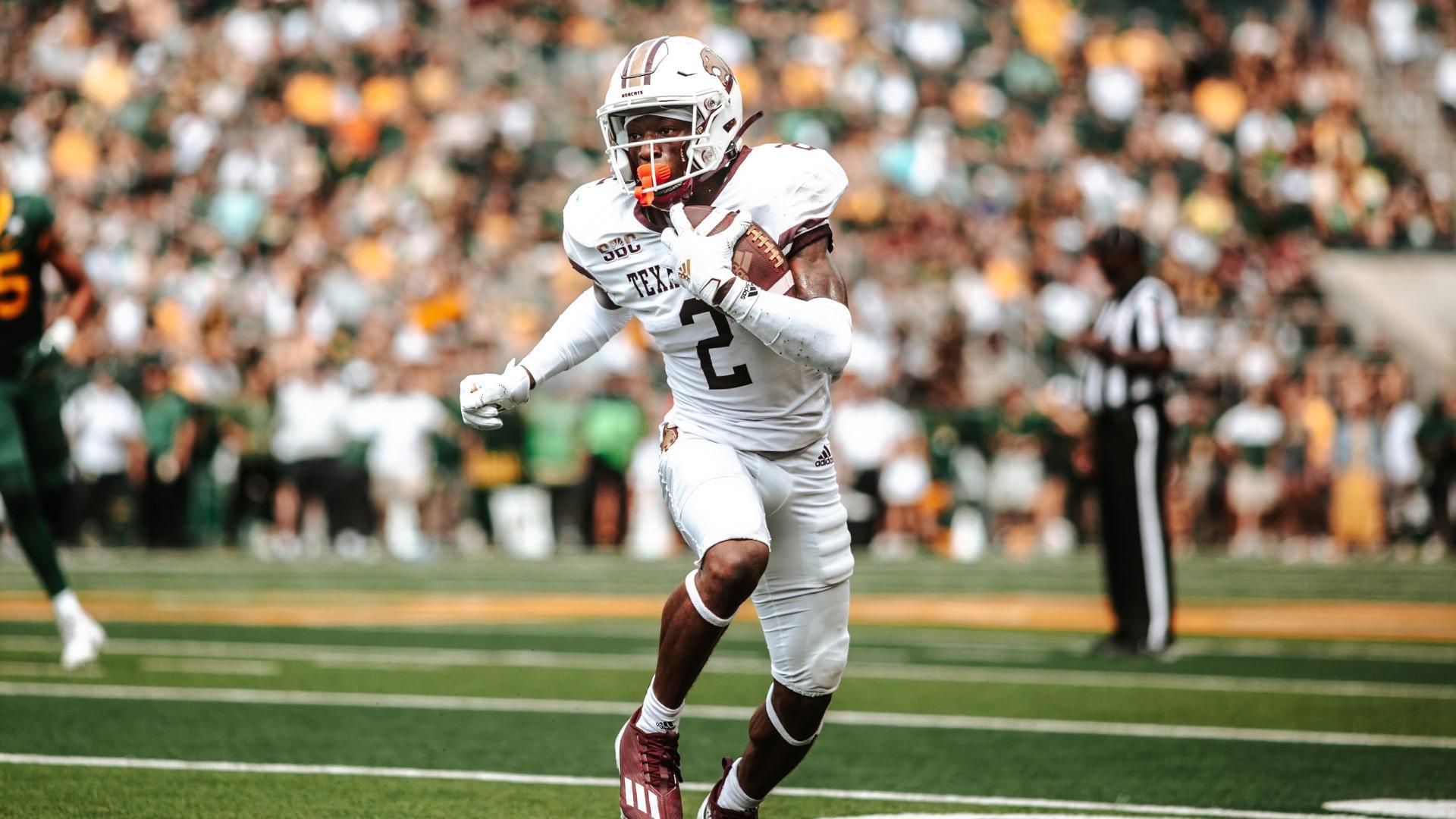 WACO — Texas State’s success on offense was overshadowed by the failures on fourth down as Baylor defeated the Bobcats, 42-7.

Redshirt junior quarterback Layne Hatcher had a great day in the pocket going 17-21 for 125 yards passing and one touchdown in the first half.

Hatcher finished the game going 24-36 for 186 yards on one touchdown while his favorite target, Ashtyn Hawkins caught 13 passes for 114 yards and one touchdown.

It was Texas State’s inability to convert on fourth down that has hindered the Bobcats as they went 1-4 on fourth down which included missing out on seven points early in the second quarter on fourth and goal.

Head coach Jake Spavital  said Texas State was not going to compete with Baylor by kicking for the three points on 4th down.

“Heading into this game, we knew we had to go for it on fourth down,” Spavital said. “Just going for field goals was not going to beat this team. That’s why we were really aggressive in what we did. We played to win the game.”

On the opening possession, Baylor running back Richard Reese scored a 14 yard rushing touchdown on a 75 yard drive helped by a  converted 4th down play by Blake Shapen on a 10 yard pass to Gavin Yates.

On its first drive, Texas State went three and out to give the ball back to the Bears’ offense.

The Bobcat defense stood its ground on the next drive and forced Baylor to go three and out and get the ball back on their 24 yard line.

Texas State put together a good drive going down to the Baylor 39 yard line.

Despite a big pass play from Layne Hatcher to Demarcus Gregory on third down, the Bobcats couldn’t convert on fourth down as a miscommunication between the quarterback and the wide receiver led to an incompletion, giving the ball back to Baylor.

The Bears responded by driving down the field and scoring on a 30-yard touchdown run by Craig Williams to put the Bears up 14-0.

Following a roughing the passer penalty on Baylor, Hatcher calmly led the Texas State down to the red-zone giving the Bobcats a chance to score.

Following a run by redshirt sophomore running back Calvin Hill on second down, he took the ball again on third down to put Texas State in goal line territory.

Facing third and goal, Jahmyl Jeter was stopped short on the goal line making it fourth and goal at the four yard line.

Deciding to go for the seven points, Hatcher’s pass to Javen Banks was tipped at the goaline and Baylor took over at its own four yard line.

The Bears were unable to convert on third down and were forced to punt, putting the Bobcats at their own 46 yard line.

Another productive drive by Texas State put the Bobcats on the Baylor 13 yard line.

The Bobcats scored their first points of the game as Hatcher threw a 13 yard touchdown pass to Hawkins to make 14-7.

Despite muffing their own kickoff return to put the ball back on its own four yard line, Baylor responded with a touchdown of its own as Shapen scored on the read option running 35 yards for the score on fourth down and headed into halftime up 21-7.

Texas State drove down the field on the opening possession of the second half and had the ball on the Baylor 35 yard line but a fumble on the screen pass gave the ball back to the Bears.

The Bobcats responded by stopping Baylor on fourth down for the first time in the game as Sione Tupou picked off Shapen’s pass.

But the turnover couldn’t yield any points as another failed fourth down attempt ended the drive for Texas State.

Baylor took advantage of the failed fourth down attempt as Shapen threw his first touchdown of the game with a 28 yard strike to Gavin Holmes to put the Bears up 28-7.

Following a Texas State three and out, the Bobcats came up with their second turnover of the game as Alonzo Edwards Jr. forced the fumble to give the ball back to the offense.

Despite converting their first fourth down of the season following Jeter’s seven yard run, the drive ended with Baylor blocking the field goal to keep the score at 28-7.

It was followed up by a Reese 52 yard touchdown run as Baylor extended the lead at 35-7 opened the floodgates for the Baylor offense.

Another three and out by the Bobcats ended in another punt as Reese scored again with a five yard touchdown run for his third score of the game and finished with 156 yards on 19 carries with Baylor taking a 42-7 lead.

Texas State returns home next Saturday against Houston Baptist with kickoff at 6 p.m. from Bobcat Stadium.