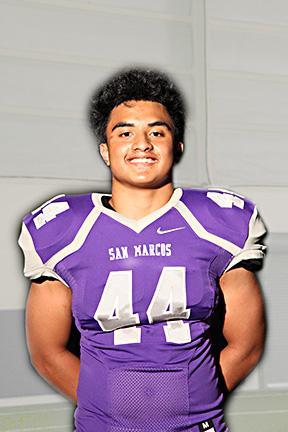 Kimo is a fighter.

That’s easy to say about Kimo Leopoldo. He owns black belts in both Taekwondo and Brazilian jiu-jitsu. He’s made five appearances in the UFC and holds a 10-7-1 record as a professional mixed martial artist.

Eight of his 10 wins came by submission, the other two by knockout. None have come by decision. He finishes his fights.

But Kimo Kinere is a fighter, too. He still manhandles his opponents, but does so on the football field rather than in the octagon. The senior linebacker has been a part of San Marcos’ varsity squad for two years and has started in the Rattlers first two outings this season.

“He’s just a soldier,” head coach Mark Soto said. “He does anything that you ask him to do.”

Leopoldo is Kinere’s namesake. Kimo’s father, Crossley Kinere, first watched Leopoldo fight against Frank Shamrock at UFC 8 on Feb. 16, 1996. Crossley was infatuated by the fighter’s 6-foot-3, 250 pound stature, the giant cross inked on his back and the mean mug Leopoldo exhibited at all times.

Shamrock defeated Leopoldo via submission in the first round. But MMA fighting quickly became Crossley’s favorite sport to watch, and Leopoldo his favorite fighter. Crossley’s fandom grew with each fight, win or lose. So much so that he eventually decided to name his son after Leopoldo.

“I just liked (Leopoldo) because of the way he fought. He’s an ultimate fighter,” Crossley said. “I loved the guy because he’s a Christian, too … I started watching it when I started to understand the game. And I began to like this guy. So that’s why I decided when I had a son I would name him Kimo.”

“(Kimo’s mother) agreed with it,” Crossley said. “She didn’t even understand, but she knows I always watch UFC and I always cheered for (Leopoldo). She goes ‘Hey, if that’s the name you picked, then we’ll use it.’”

Two hundred twenty pay-per-views later, Kimo’s become a UFC fan, too. He roots for Tyron Woodley, the current welterweight champion who recently defended his title for the fourth time, submitting Darren Till on Sept. 8 in the second round of the UFC 228 main event.

He knows the weight of Leopoldo’s name. He’s tried to live up to it throughout his life, and found an outlet to do so in football.

The senior personifies what the Rattlers have tried to do since falling 0-2 to begin the 2018 season: fight back. Kimo’s held his own thus far by racking up 10 total tackles this year, already doubling the five he had in 2017. He finishes his fights.

“I look back on last year, how we would be down in the first half,” Kimo said. “I was just remembering last year, we’d be down and I was like ‘Hey, even though we’re down, we still won some games where we were down by like 30 points,’ and everything. So, that’s just how I look at it, like last year’s team.”

But to the eyes of his team and his father, Kimo has already met the expectations that Leopoldo’s name carries. Now, they’re ready to see how he surpasses them.

“He’s just a good player for us,” Soto said. “He goes to work everyday. He’s going to be in the right place, and you ask him to work on things and he works on them. You can see him working on, concentrating to try and get better. He’s been a staple in the middle for us.”