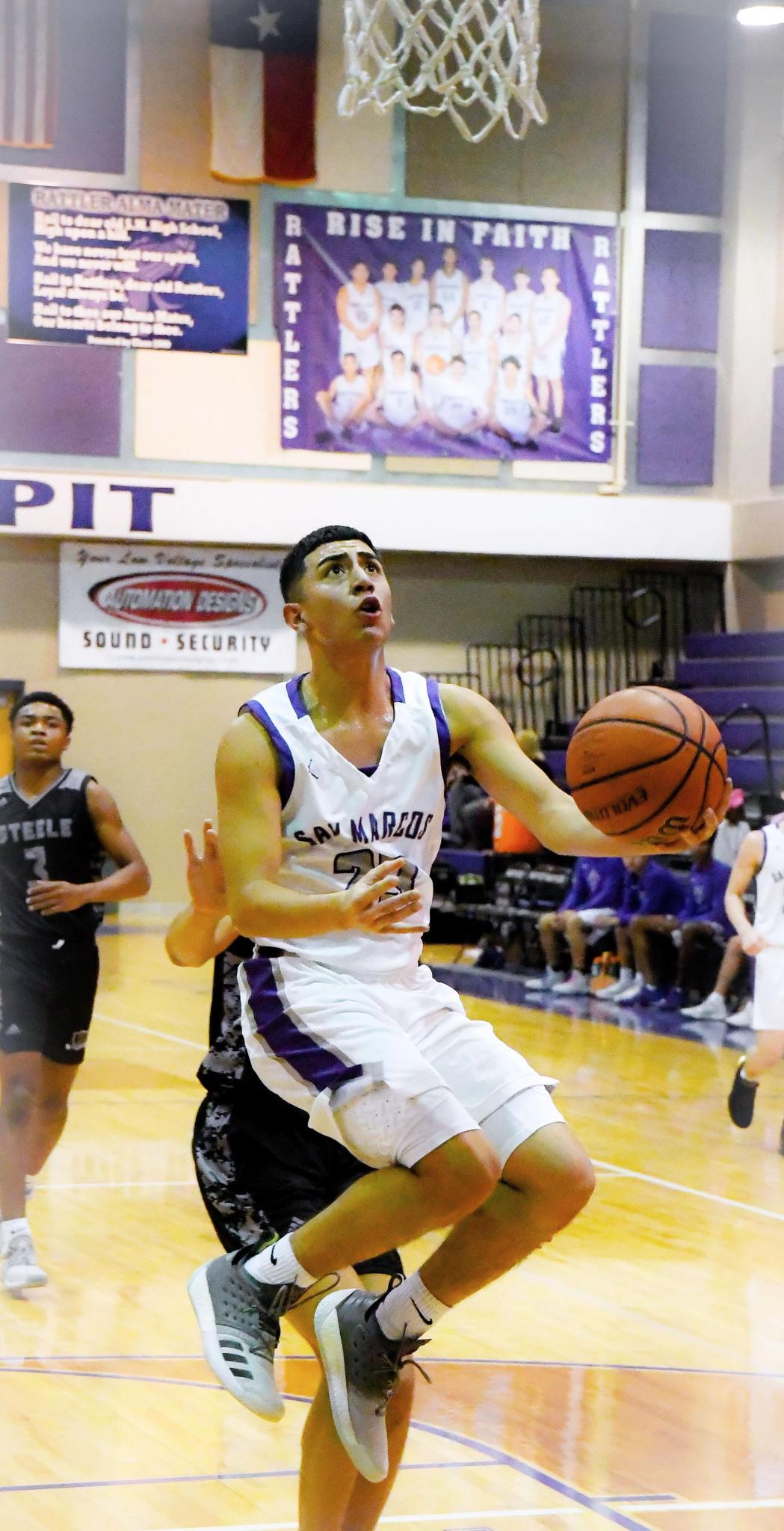 Pinchback ready to tip off first season with San Marcos

Last season, San Marcos went 10-24 on the season and 3-11 in district play. This year, the team enters the season with intentions of challenging everyone that steps on the court with them while building the future of this program up for high expectations. The Rattlers introduced head coach Steven Pinchback to the program this offseason, with 14 years of coaching experience and two state championships under his belt. They also brought in assistant coach Jason Napoli, who has state championships in basketball, football and track. Pinchback and Napoli, both former assistant coaches at DeSoto, plan to push their players to the limits in order to get them ready for one of the tougher districts in the state.

“We gotta bring an edge, some mental toughness, a little swag. We gotta have it. I’m trying to relate it to how they can understand it but where I’m from, when we step on the court, most of the time the kids on the other side were already beat. But that’s a mentality,” Pinchback said. “You carry yourself that way. That’s the part that we bring that’s going to rub off on the kids. They’re gonna start walking a little different, talking a little different because they’re gonna have confidence and they’re gonna know these guys have been there.”

It starts on the defensive end for Pinchback and his team. San Marcos is one of the smaller teams in the district, so in order to get easy transition points, the team will have to adopt an up-tempo style of play while limiting its turnovers.

“It’s gonna be defense, that’s the DeSoto way. We stress defense,” Pinchback said. “I’m going to run things as far as sets and some plays but I’m also going to let the kids play. The way I approach it, I’m looking for mismatches. I’m looking, ‘Is my guy better than your guy? Can you stop my guy? If you can’t stop him, I’m going to go at you with the same guy until you stop it.’ We try to control the tempo, whether it’s fast or slow. We’re gonna play hard and defend and then we’ll let the chips fall where they may.”

In one of the toughest districts in the state, San Marcos believes that anything can happen until the final game of the season.

“To me, it’s wide open. The thing about it is competition and all those things don’t scare me,” Pinchback said. “We don’t get intimidated. To be the best, you play the best, so we look for that. We want to play the best teams because eventually we’re gonna be one of the best teams in this area. We respect all our opponents, but we are not scared of anyone.”

To win on the court, it starts with building the culture that you want your team to adopt. Off the court, the Rattlers have been giving their time throughout the community in order to build a better relationship. It is more than basketball and winning to Pinchback and his team.

“The kids have been going to all the schools opening doors, going to the food bank, donating time. We have to give in order to receive. We have to give and show them what we bring so we can receive their love and invitation,” Pinchback said. “Even though we talk about winning state and we are very driven, at the end of the day what kind of man did we raise? What kind of young man, a father, a husband? That’s how we’ll determine this in the long term. We want them to know, ‘Come be a part of Rattler basketball. We’re here, we invite you. We shine, you shine.’”

There’s something special brewing in the city and Pinchback wants everyone who supports them to know that with a fresh start to the year.

In the offseason, Pinchback and his staff got to evaluate players for the first time with the intention of finding the future starters of this team. Only one specific player has been named into the starting five but everyone else will battle for playing time.

“The freshmen really impressed me. They’re so young, they don’t know any better, so they go hard. I use them as an example for the older guys, like, ‘You need to play like they play,’” Pinchback said. “Some of the older guys think that they deserve it because they’re seniors but what they’ll figure out with me is that everything is going to be earned through the competition. My thing is to probably start two freshmen, a sophomore, a junior and senior point guard C.J. Valencia.”

Pinchback and his team start the new journey on the road on Nov. 16 at 2 p.m. against San Antonio Kennedy. The team is searching for a new identity but will be ready this year for all the competition thrown its way.

“We’re gonna be on the visitor’s side when we’re at home, so I can talk to the crowd and I’m gonna show them what I want,” Pinchback said. “They’re gonna love it, they’re waiting for something, someone to take them to the next level, so why not now? Why not us? Everything we do is about building. Our motto is building a monster, we’re building a monster in San Marcos, Texas. And you may not see or know about it now. That’s okay. You all can be sleep, but we’re gonna wake you up because we’re coming.”