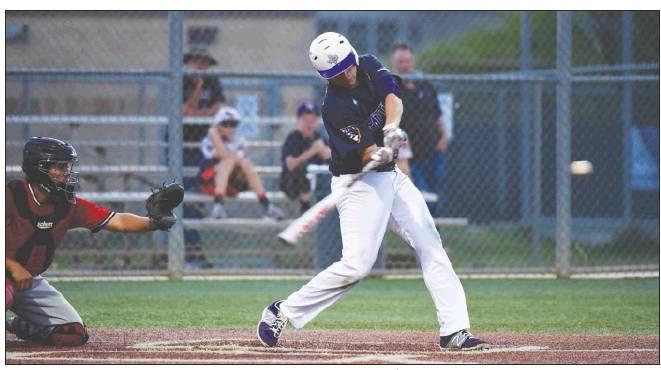 Junior Nick Villalobos (No. 10) connected with a pitch for an RBI-double in Tuesday's District 14-6A matchup against Manor inside Rattler Field in San Marcos.
Daily Record Photo by Gerald Castillo

Emotions were high inside Rattler Field on Tuesday as the community came out to support the baseball team’s playoff run and fallen San Marcos officer Kenneth Copeland.

The Rattlers went to work early after the brief honoring of the San Marcos Police Department and First Responders. A dominating offensive performance led to a 14-3 win over Manor.

“It was great to bring the community, the school, the families out in a great event to support the people who take care of us and protect us,” head coach Brian Webb said. “Our kids were hyped and the tribute to officer Copeland with the jerseys. We anticipated this and it was just a fantastic night all the way around.”

Getting the start on the mound with playoff implications on the line for San Marcos was senior Josh Wilder. The senior delivered three strikeouts and only gave up three runs in his three-inning outing. The control Wilder had on the mound gave his offense the time it needed to get going.

In the first inning, the offense batted through the lineup and produced three runs. In the second, the Ratters stole the game by putting up 10 runs. The momentum swung in San Marcos’ favor and the Mustangs were never able to recover.

Leading the Rattlers in the box were junior designated hitter Nick Villalobos and sophomore shortstop Issac Mancias. Villalobos ended the evening 2-for-3 with a base-clearing double in the second inning. Macias went 3-for-3 with one triple, two singles and a walk. As a whole, San Marcos ended the night with 10 hits.

“It just felt good to be here and supporting the people who are on-duty (for us),” Villalobos said. "(Our confidence) was excellent. We knew we had to win this game. I had no doubt in my mind we were going to win. We just came out and did what we had to. It was excellent.”

Manor’s loan chance to chip away at the Rattler lead came in the third inning. Following a walk and an error, the Mustangs put up two runs. But San Marcos responded with an insurance run in the fourth to lock in the run-rule in the fourth and fifth innings. Junior Andrew Moreno closed the final two innings, only giving up one hit before producing the close.

“What we’ve had to work on the last few weeks was our approach and handling it and we still got things we need to get better on,” Webb said. “But the kid’s effort was there. Their hustle was there, they played hard. We got some big hits by the middle of our order and they’re starting to play, starting to understand what we want to accomplish.”

The win puts San Marcos at 4-4 in District 14-6A play with two games remaining against Austin Anderson and Austin Bowie. The Rattlers could close the season as high as the 2-seed and as low as the 4-seed depending on how the final two games play out.

Amid all the playoff scenarios, Webb added that the Rattlers want to control what they can control and show up to the final two games with a win-out mentality.

“We don’t want to wait and put the fate in someone else's hands,” Webb said. “We want to go earn it our own way. We’re 4-4, (Manor) is 2-6. One win by us or one loss by them and we’re in. We’ve set our goal of winning a couple more on our end and go and get second place. We’ve got two tough games next week. This is playoffs. This is where we have to continue our fundamentals and continue to get better.”

Friday’s match against Anderson is scheduled to start in Austin with first pitch set at 7 p.m.