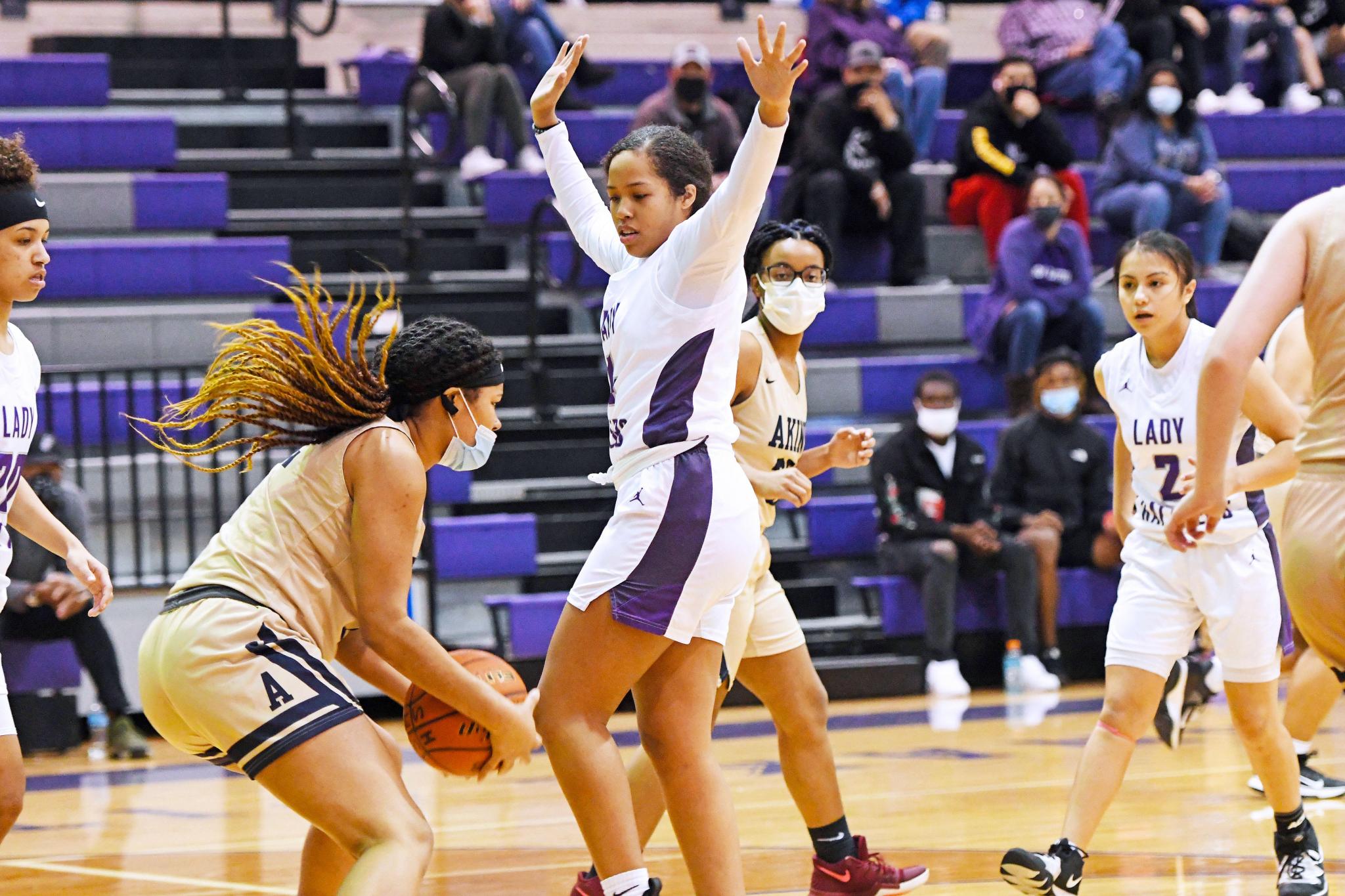 One side of the ball can do the talking for you. For head coach Veronda Kendall, she emphasizes to her team to let the defensive end do exactly that and it spoke volumes in the second half of another district match on Tuesday.

San Marcos (8-3, 3-3 district) played the role of thief exceptionally well, racking up an absurd 30 steals as a team in their largest margin of victory this season, a 77-30 thrashing of the Austin Akins Lady Eagles (0-10, 0-3) inside the Snake Pit.

Playing against teams desperate for their first win of the season can be a tough test because they want to clear that zero from the win column. Akins proved to be on the verge of upsetting San Marcos, only trailing 23-22 at halftime.

The voice Kendall pushed for seemed mute as San Marcos took the full eight minutes to return from the locker room before the third. The speech must’ve cured all shyness, as the Lady Rattlers executed a barrage of steals in the third quarter, leading to a 26-5 run. It all started with the pressure up top by senior guard Kayla Presley, who made easy work anticipating steals because of her teammates traps. Presley pestered the visitors right into a school-record 12 steals in a game.

“What was working, honestly, was my right-hand man Vivian (Hernandez) and especially Angelina (Sotelo) on that 1-3-1, they would cut the guard off and I would just come behind and steal those passes or their dribbles,” Presley said. “It felt great having that many steals.”

Even if the Lady Eagles found a way to get past the guards, senior forward Faith Phillips was waiting to block their shot, swatting away four attempts. On the other end, Presley, Hernandez and Sotelo lit up the scoreboard, knocking down five of their six 3-pointers in the second half, effectively ending the game, 77-30.

The second half from San Marcos was one of its most impressive performances of the season, outscoring the Lady Eagles 54-8 while doing it in various aspects of the game.

“We are a quick team. So our defense is just key whenever we know we got a good defensive gameplan, and we take advantage of it and we get a lot of steals as a team,” Hernandez explained.

Presley had a game-high 19 points, along with five assists, and four rebounds. Sotelo and Hernandez combined for 27 more Lady Rattler points.

The second cycle of district play starts Saturday at 2 p.m. against Austin Westlake (12-5, 7-0), who defeated San Marcos in their first matchup, 51-43, on Dec. 8. Kendall learned from the first matchup what the team will have to do in order to beat the Lady Chaparrals on Saturday.

“Hopefully we can do a better job of attacking the basket. And I think decision making was huge. Last time we played them, if I remember correctly, that second half, it was a close game. But we didn’t make, in some instances, the right decisions, and then it ended up costing us,” Kendall said. “So we’re gonna look at everything and try to go in there with a game plan that’s gonna give us a chance to win.”