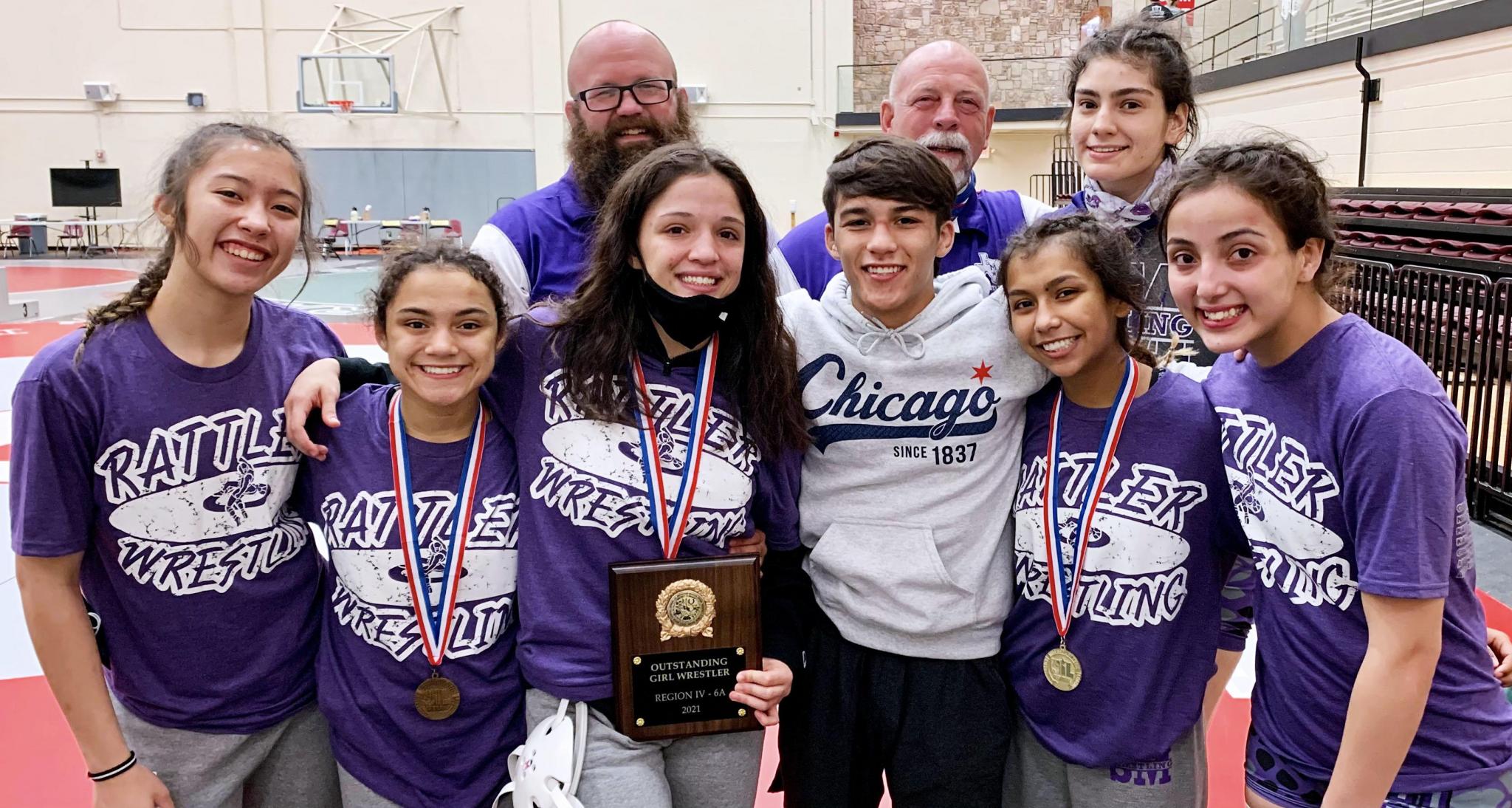 This past weekend, the San Marcos wrestling team competed in the UIL Region IV Championship tournament.  Several wrestlers came in as district champions hoping for a ticket to the State Tournament on Saturday April 24.

For the boys’ team, back-to-back district champion Matt Banda blew through the competition to set up a showdown with an undefeated San Antonio Johnson wrestler in the championship. After a bruising and tough-fought battle Banda came out victorious in a 4-3 win that went down to the final seconds. He is the undefeated 120-pound Region IV champion and is a top seed in the State Tournament.  Matt qualified for the State tourney for the third year in a row.

Undefeated at 95 pounds, district champion Nevaeh Banda looked to join her brother as a state qualifier in only her second year of competition. Starting the tourney off right, Banda won her first match by pin in under one minute. She continued her dominant ways throughout, winning the Region IV championship in her weight class by pin over a San Antonio Madison competitor. Nevaeh is the second undefeated regional champion in San Marcos girls’ history. She looks to take her No. 1 state seeding and turn it into a state championship.

Kaylynn Martin at 102 pounds came into the tourney as an undefeated district champion.  In her first match of the tournament she met up with a top-five wrestler from Cibolo Steele and admittedly, her nerves got to her. Losing her first match, she then battled back, starting with a 29-second pin in her next match, followed by a 6-1 win over a state qualifier from PSJA and ending with a pin in the second period in the third-place match. Kaylynn will continue her journey next week at the UIL State Tourney.

Katalina Postert at 128 pouds made some noise in her first year wrestling as a freshman, qualifying for regionals by finishing in third place at district. Kat dropped her first match against a tough Edinburg wrestler, winning her second match 6-1 before being knocked out of the regional tourney by an eventual state qualifier from Austin Bowie. Kat looks forward to next season and the growth she will have between now and then.

Gianna Moreno at 138 pounds won her fourth district championship, bringing an undefeated record into the regional tourney for the third-straight year. Gianna started off with a first-period pin, then had another pin in her second match, which set up a rematch of the district championship in the regional finals. Coming out fast and aggressive, Moreno pinned her opponent in the first period with three seconds remaining. For the second year in a row Gianna was awarded the Region IV Most Outstanding Girls Wrestler award for her performance.  She qualified for the state tourney for the third time, looking to add to her third (2019) and fourth (2020) place finishes. This is the second time in as many seasons that she finished as the undefeated Region IV champion.

Anisa Moreno at 148 pounds as a freshman came into the district tournament last week competing in her first actual tournament. The season was made up of duel meets only due to UIL Covid restrictions. She earned a runner-up medal at district and started her regional tournament off right in avenging an early loss by pin, with a win by pin of her own in the first match. She then beat a tough district champion from Weslaco to advance to the semifinals. There she lost to an experienced Cibolo wrestler. On the backside of the bracket, she won her next one to advance to the 3rd place match against a senior from San Antonio Madison. Anisa battled but came up short and finished fourth, advancing to the State tournament as a freshman.

Alexa Hernandez at 165 pounds was a very motivated senior coming in to this year. She finished as the district runner up and started her regional run with a 26-second pin in her first match.  She then lost to a talented Steele wrestler, before winning three of her next four on the consolation side of the bracket to finish fifth. In a normal year, fifth-place finishers are state qualifying alternates, but this year with COVID ,they are not. Alexa finishes her career as a three-year letterman in a sport she decided after watching her older brother compete at heavyweight. Alexa ended her career at San Marcos with a 7-5 win over Cedar Park Vista Ridge.

The girls team finished as the Region IV runner-up. Leading the way was Gianna Moreno with 26 team points, followed by Nevaeh Banda with 24.  Kaylynn Martin had a great tournament with 18 team points scored.  Adding to the total was Anisa Moreno with 116 points and Alexa Hernandez with 15.  Finishing off the successful team effort was Kat Postert, scoring points with a win over a one-loss wrestler in her second match.  This is the highest regional placement by the girls team in school history.  Four of the six competitors will be back next season, with two freshman and two sophomores amongst them.