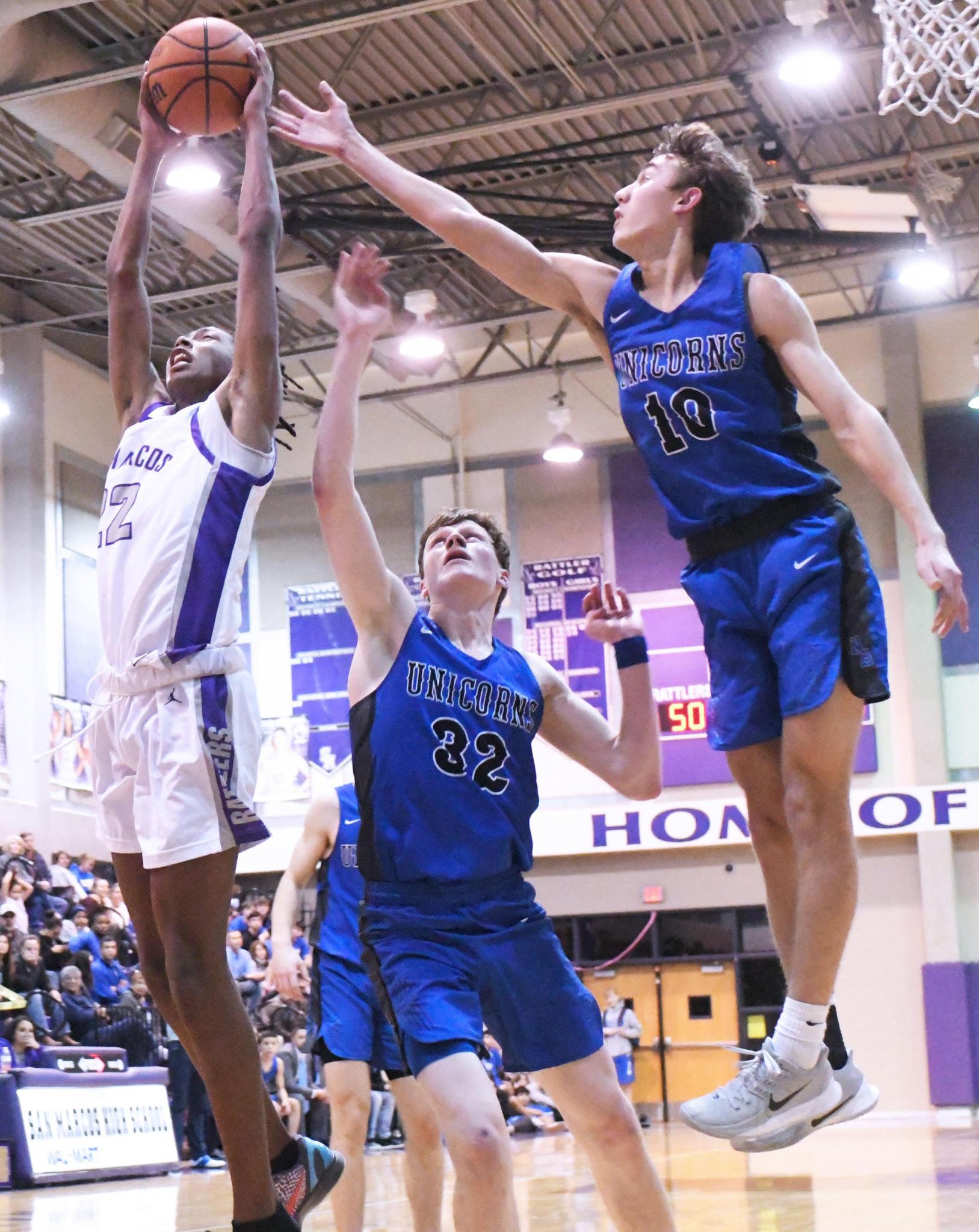 Rattlers give up eight 3-pointers in loss to Unicorns

It’s been a struggle defending the perimeter this season.

San Marcos had been giving up 91 points per game in its last four matchups and most of that stems from not being able to fully execute defending the 3-ball. At least four teams have hit more than seven 3s on the team and New Braunfels continued to exploit the Rattlers’ weakness, knocking down eight outside shots en route to defeating San Marcos 65-56 inside the Snake Pit.

“It’s tough. Some of them were open but a lot of them were pretty well contested, they just shot the ball well. They’re in the gym just putting up shots, so it shows,” head coach Steven Pinchback said. “It’s nothing you can really do. They hit a lot but (our players have) just gotta get used to seeing that and knowing how to stay attached a little bit better. It’s just things we gotta work on. ‘Your guy’s hitting shots, what are you gonna do to stop them?’ So we have to take it a little more personal.”

New Braunfels (24-10, 6-6 district) came out firing on all cylinders, starting the game 5-6 from the field and 4-4 from beyond the arc. The visitors didn’t miss a three until there were four minutes left in the second quarter. Freshman guard Jon Vega provided a much-needed spark off of the bench for the Rattlers by rebounding and getting second-chance points around the rim. His six points were enough to keep it close at the end of the first quarter, 21-15.

For a two minute stretch, it seemed the Rattlers started to find a rhythm, led by Kaden Gumbs. The freshman guard gave the Unicorns a taste of their own medicine by knocking down a triple in the midst of a 7-0 run, trimming the deficit to 29-24 with 2:18 left. San Marcos had a chance to tie the game at 31 all but freshman forward Malik Presley was denied by the rim on a dunk attempt, followed by two missed free throws by the Rattlers and an old-fashioned and-one by the visitors, who escaped into halftime with a 34-29 lead.

The Rattlers went man-to-man and somewhat contained the three in the second half but New Braunfels already had 18 points off of perimeter shots. Man defense held up as Gumbs broke out for two transition buckets, which cut the lead to 34-33 but the Unicorns knocked down their seventh triple of the game, pushing it back up to a four-point lead. The hosts suffered another tough finish to the quarter as New Braunfels senior guard Dylan Schmitt was fouled on the 3-point line with 1.7 seconds left in the third. He hit 2-3, making it 48-42.

“We just kept giving up the big shot, the big three,” Pinchback said. “It was going back-and-forth but you gotta execute. You can’t foul the 3-point shooter and give them free throws, you can’t do that stuff, you gotta get a stop. It's kinda like a heavyweight fight — they're hitting, we’re hitting, you’re on the ropes, you just have to fight through some of those mistakes and make a play. Right now we need guys that want to make a play. Some guys don’t wanna mess up but when you’re a special player you make a play. Those are things we’re gonna continue to grow with and learn from.”

The Rattlers started the fourth with a quick 4-0 run that cut the lead to one-score game again, 48-47. New Braunfels settled down with five unanswered points, including its eighth three of the night and in the end, San Marcos was forced to resort to the foul game, allowing the visitors to walk out of the Snake Pit victorious, 65-56.

Gumbs and Presley paced the team with 16 points each. Presley fell one rebound short of a double-double with nine rebounds. Gumbs dished out three assists.