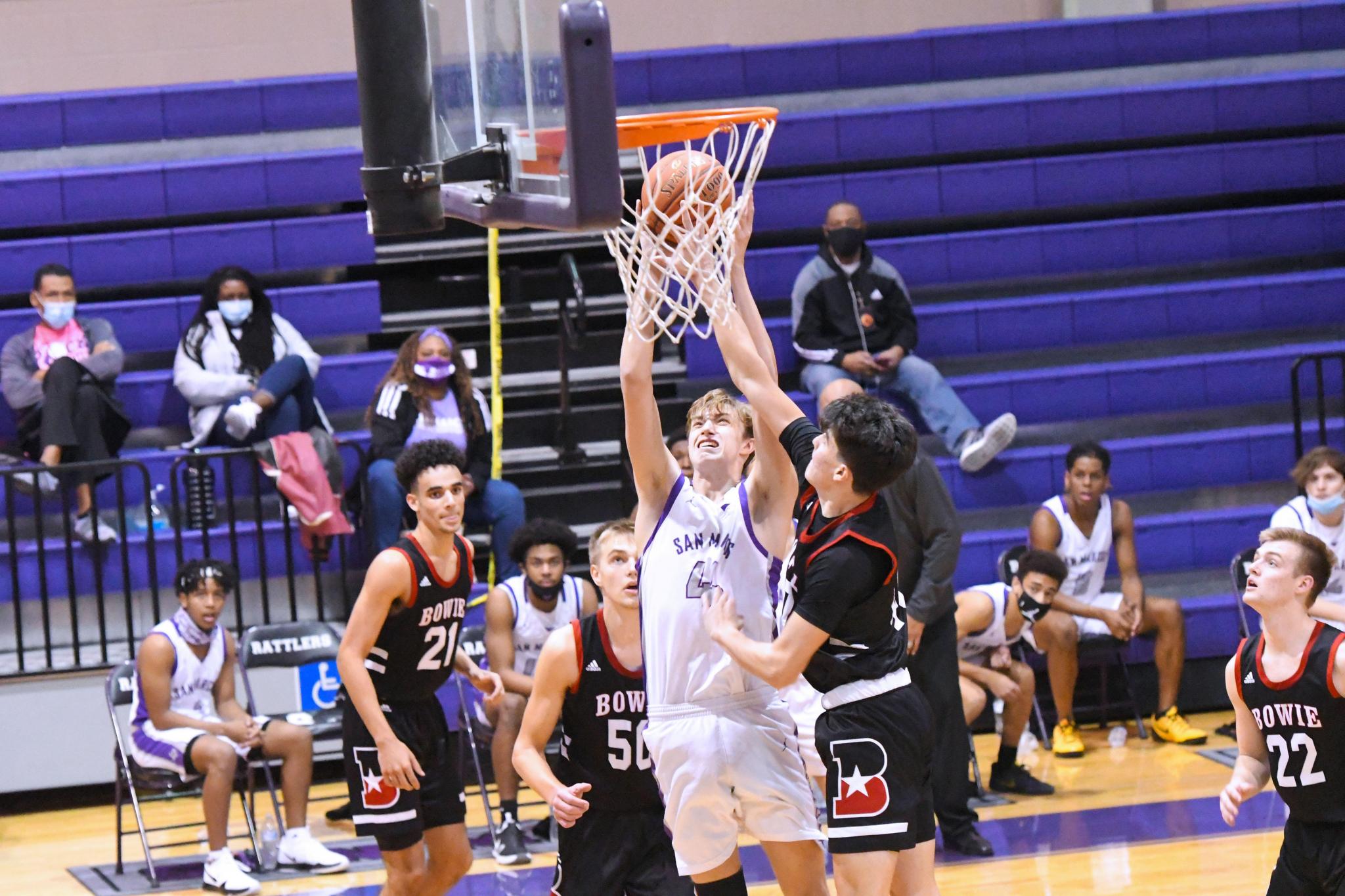 Since head coach Steven Pinchback took over as the leader of San Marcos, they were 9-0 in games when they held their opponent to 50 or less.

On Friday night, the Rattler defense remained stout the whole game but down the stretch it was the offense that hurt the hosts, suffering their first loss while achieving that feat. Consecutive turnovers in the final minute ended the purple and white’s five-game win streak, 48-39, giving them their first loss of the new year and in district play.

This is a feeling San Marcos hasn’t felt since the end of November but after winning just three games in district play last season, they understand they are going to lose some close ones. But it’s how you bounce back that makes a winning team.

“Nobody ever wants to lose. Everybody always wants to win. But when you do lose you have to grow from it, and you gotta have a growth mentality and I think our kids have that and I think they understand that,” assistant coach Jason Napoli said. “Yeah, we didn't execute the offense on the offensive side as well as we should but the next practice we’re gonna get back to work.”

For San Marcos, this would be the toughest game so far in the district. Napoli said his team felt good heading into the game. They had a good pregame meal, talked about the team being a family together and knocked down everything in warmups.

However, the hot shooting didn’t translate to the game as the Rattlers tied its second-lowest point total since the Pinchback era started. Bowie threw a zone at San Marcos, forcing the team to take a lot of contested looks. Nothing the Bulldogs did came easy either as it was grit-and-grind the whole first half, leaving the score 24-19 heading into the break.

Bowie’s stars started to catch a rhythm as senior point guard and Army commit Coleton Benson found his stroke from outside, swishing a 3-pointer that left the Rattlers trailing 37-30. Heading into the last quarter the defensive intensity the hosts had been playing with had to increase even more.

The Rattlers held Bowie to one point until the 2:58 mark but still couldn’t score themselves, only scoring four in the time frame. It was imperative they get another stop. Senior Grayson Harris slid over and took his fourth charge of the game as they trailed 38-36. Bowie hit their free throws, then sophomore guard Kaden Gumbs hit the biggest shot of the night cutting it to one with 44.3 seconds left. Napoli was not surprised by Harris’ ability to be in during the clutch moments.

“Grayson is a great guy and we love him to death because he does the dirty work and he's not scared to do it. He’s accepted that as his role is ‘This is how I'm going to stay on the floors, I'm going to take a charge and I'm going to get a dirty rebound or dive out of bounds and save the ball,’” Napoli said about Harris’ role. “He does all the little things that he needs to do to stay on the floor because we are very talented with underclassmen and as a senior, that’s how you earn playing time.”

Next time at the charity stripe the Bulldogs weren’t as fortunate, missing one at line. The Rattlers had their final chance to tie it but the last two possessions of the game for the purple and white resulted in a turnover and prevented them from getting six in a row in the 48-39 victory.

“I think the majority of our issue scoring was because we didn't execute the full gameplan, and when you hold a team under 50 and don't score 40, that's that's a tough one to swallow,” Napoli said.