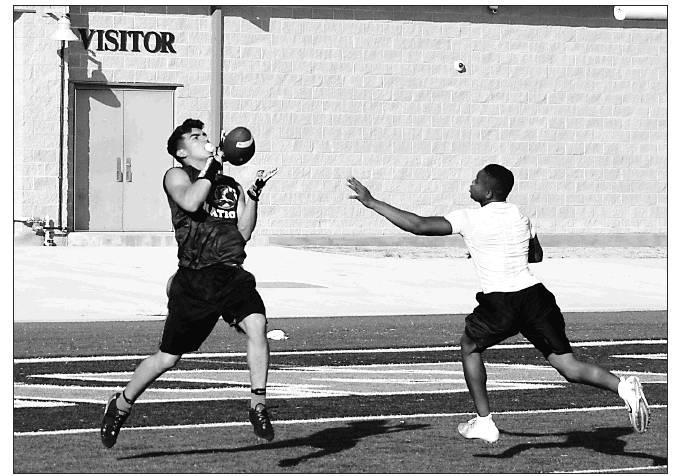 The Rattlers dropped their first game of the day, 25-19, to Canyon Lake. San Marcos bounced back with a 31-19 win over Wimberley.

“Just getting ready for the season, so once we get that connect and everybody gets that spark with each other then it’s unbelievable,” Williams said. “But when we come out dry and stuff we lose to teams that are under us that we should beat. Whenever we come out heated and pumped up, we get some good results.”

Williams said the Rattlers’ bond is ‘pretty good’ with one week of summer 7-on-7 remaining.

“At the beginning of spring ball, in March, everybody was upset with each other because we didn’t really have a connection,” Williams said. “Whenever the quarterback started bonding because then they know how the receiver run their routes or whatever. Right now, it looks like everybody is getting along.”

San Marcos’ wide receiving corps had a solid day Wednesday, and Williams made it clear that the unit believes it’s the Rattlers’ best.

“We’re the best out here,” Williams said. “We take pride in that. We call ourselves the Air Force because when the ball is in the air, we’re going to get it.”

San Marcos concludes 7-on-7 on June 13 against Kyle Lehman at 6 p.m. and Seguin at 7 p.m. Williams said the Rattlers look to come out stronger to avoid another loss.

“The first game, I’m going to come out and get the team hyped because (Wednesday) we came out pretty lame and we lost a game,” Williams said. “So, we’re going to come in strong since it’s the last one at San Marcos and there’s no team better than us.”