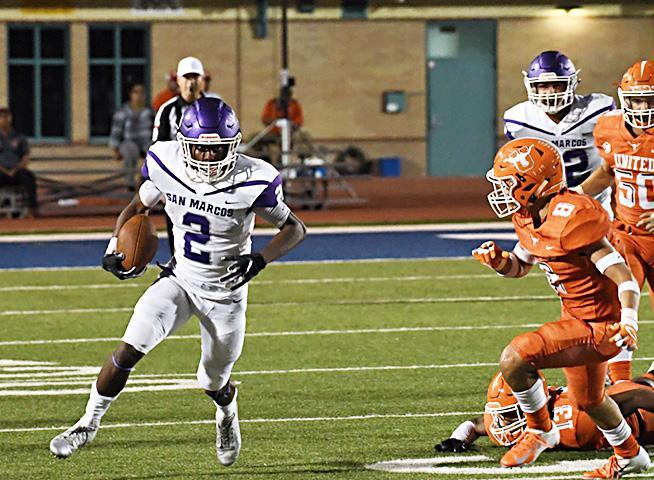 Rattlers working to be their ‘best’ against Judson

The Rattlers haven’t been their best lately.

San Marcos got off to another slow start last week when it fell behind in the first half against the Hornets at East Central Stadium, 17-7. The team has never held a lead during the first half this year, but does have a reputation for making big comebacks, as evidenced by its 50-49 road win over Laredo United on Sept. 13.

The Rattlers didn’t play like themselves, though. Their big energy wasn’t there. The big plays didn’t happen often enough. There was no big comeback. Instead, they fell to East Central, 31-21, dropping the first district game of the season.

Now, San Marcos is trying to find what was missing.

“Whatever we can do to get ourselves right, to get ourselves on the right path, that’s what the main focus was,” defensive coordinator Gilbert Rodriguez said. “Whether it’s to practice a little harder, whether we need to watch more film, whether it was to re-evaluate yourself, kind of ‘look yourself in the mirror’ type stuff and re-evaluate that. Something where you can work on to just be your best. And don’t worry about anything else.”

The Rattlers will need to be at their best when Converse Judson comes to town. The Rockets are 3-0 this year, fresh off a 58-21 home victory over Cibolo Steele last week. They’re currently ranked No. 5 in the state among 6A schools.

San Marcos is excited for the challenge.

“We wouldn’t want it any other way, for a lot of reasons,” Rodriguez said. “No. 1, just because these kids deserve to be on the field with other teams. And No. 2, we work just as hard as they do. And we tell them all the time, ‘They put their helmet (on) just like you do. They put their pads on just like you do. What’s the difference? Let’s go out there and work at it’ ... It brings out the best in us.”

Rodriguez said the best version of the team has razor-sharp focus, does everything right and runs on “Rattler time” — a team that always has a sense of urgency.

That team didn’t show up last week in San Antonio. But for San Marcos, the best is yet to come.

“What we know, and what we’re always going to know, is that Judson does a lot of things right,” Rodriguez said. “What we tell our kids, how you combat that is taking care of yourself. Worry about yourself. That’s why the main focus was ‘Do your best and don’t worry about anything else and the good things will come.’”