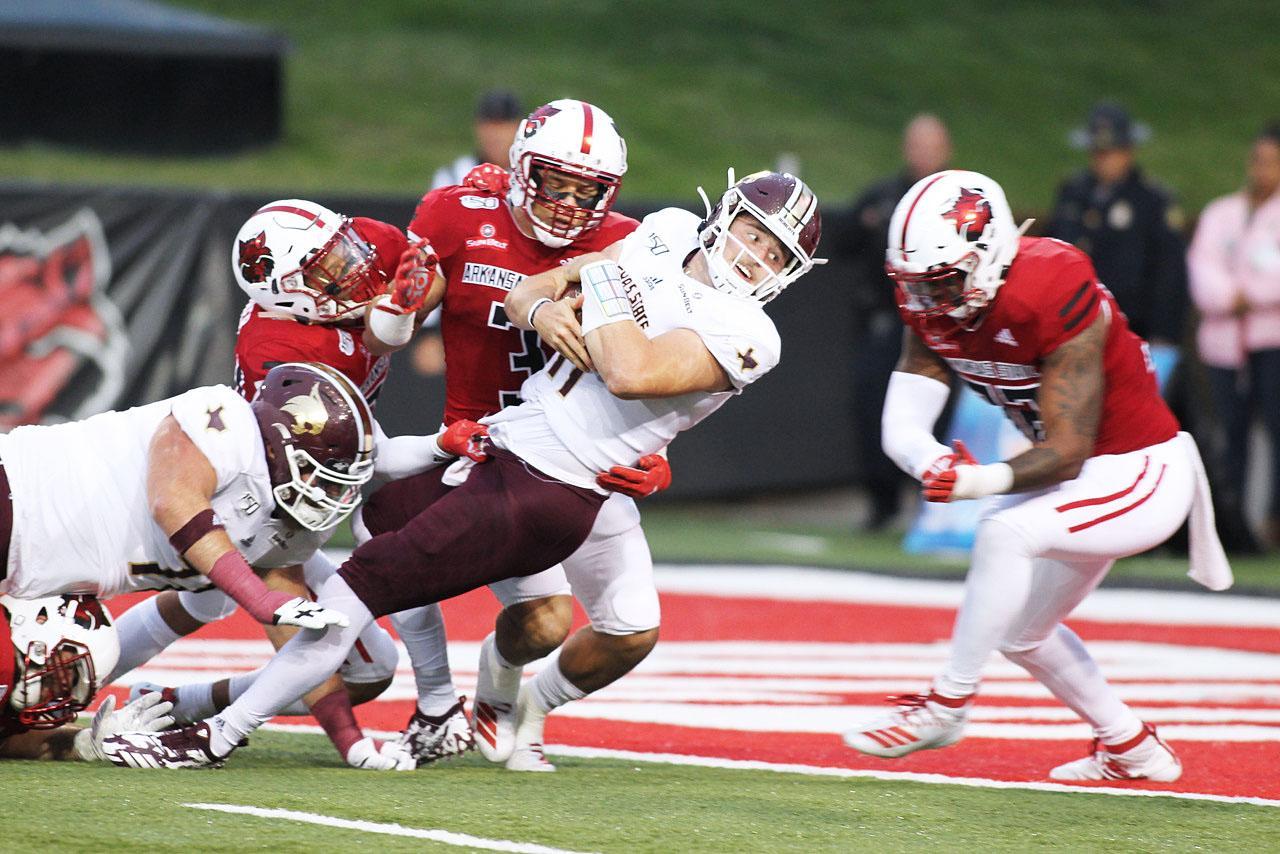 The Bobcats couldn’t build on anything.

Caleb Twyford took a handoff on the third play of Texas State’s game against Arkansas State on Saturday in Jonesboro, Arkansas. The junior running back banked outside to the left, then shot up the field for 60 yards to the Red Wolves’ 6-yard line.

But the Bobcats only gained five yards on the next four plays, never reaching the end zone and committing a turnover on downs at the 1. Arkansas State countered with a 7:22, 18-play, 99-yard opening drive that ended with redshirt freshman quarterback Layne Hatcher tossing a 13-yard touchdown to redshirt senior wide receiver Omar Bayless.

The hosts scored another 10-straight points en route to eviscerating the visitors, 38-14.

Texas State (2-5, 1-2 Sun Belt) did have answers after falling behind 17-0, though. The Red Wolves (4-4, 2-2) drew a penalty on when the ensuing kickoff rolled out of bounds and a personal foul by senior defensive back B.J. Edmonds on first down moved the maroon and gold offense to the 50-yard line.

Twyford gained two yards on first down and sophomore Tyler Vitt — starting in his first game since Texas A&M on Aug. 29 — followed up with a 37-yard dart to junior wideout Jeremiah Haydel. Head coach Jake Spavital chose to go for it again on fourth down but used a wildcat package to try to convert it. Twyford received the direct snap, cut to the right and turned the corner to the end zone for a 2-yard touchdown run.

The Bobcats’ defense forced Arkansas State to punt on the next drive. Vitt completed five of his next six passes, leading to another score. On 1st and 10 from the Red Wolves’ 6, Vitt sent a screen pass to senior wide receiver Hutch White, who broke left to the end zone for his first touchdown of the season.

Texas State came up with one more stop before the half and headed back to the locker room trailing just 17-14. But the team never scored another point.

The visitors were held to a three-and-out on their first drive of the quarter and had to punt out of its own end zone on fourth down. Freshman punter Seamus O’Kelly’s kick was tipped by Bayless and recovered at the 15-yard line by redshirt senior running back Jamal Jones. Sophomore running back Marcel Murray punched it in two plays later for a 13-yard touchdown.

The hosts scored another 14 unanswered to take the 38-14 victory.

"We gotta figure it out," head coach Jake Spavital said. "Honestly, we have to have some real talks on what we are doing and how we are accomplishing things. Teams are lining up and playing aggressive on us and having one-on-one matchups and we just are not executing it. What I see is an offense that’s not really confident and not putting us in very good spots because our defense was out there almost 40 minutes."

Vitt finished the night completing 15-of-27, throwing for 146 yards, one touchdown and two interceptions — both coming in the second half. Junior quarterback Gresch Jensen, who started the past five games for the Bobcats and suffered a concussion against Louisiana-Monroe on Oct. 10, did not travel with the team to Jonesboro.

Haydel was Vitt’s top target, catching three passes for 56 yards. Twyford began the game with two carries for 63 yards, but only gained 13 yards on his final 14 attempts of the night.

Omar Bayless ended up with two touchdowns on the evening, tying the Sun Belt’s single-season record for most receiving touchdowns and breaking Arkansas State’s with 12.

Texas State will head to Lafayette, Louisiana next week to take on the Ragin’ Cajuns (5-2, 2-1) on Saturday at 6 p.m.

"I think our kids fight, they don’t quit. As a coach, that is all I can ask for," Spavital said. "But to be good at this game, there is so much mental stuff and so many self-inflicted things. It comes down to the team that consistently does their job without mistakes and that is what I told the team right there."

This story was updated at 1 p.m. on Monday to include postgame quotes from Jake Spavital.