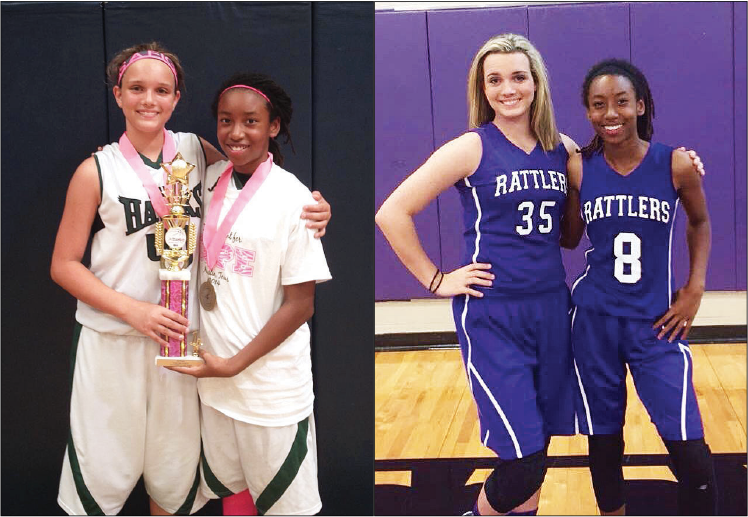 Left: Faith Phillips (left) and Kayla Presley (right) after a game with the Hill Country Hawks in 2014. 8Right: Phillips and Presley in their Rattler uniforms in middle school. Photos submitted by Wendy Medcalf

Seeing yourself on a jumbotron can be an anxiety-filled moment. But for juniors Kayla Presley and Faith Phillips, being on the big screen is one of the defining moments of a friendship that’s been holding strong for over a decade.

The friends shared the spotlight at Strahan Arena during a Texas State conference volleyball game. The pair had just come from a middle school basketball practice and were sitting in the stands when their faces popped up on the big board during a timeout. Presley did her best “Footloose” impression. Phillips tried to do the same, but fell down laughing before the camera cut away.

The video captured what had already become an ordinary occurrence — Presley and Phillips, attached at the hip. Presley and Phillips found the love of basketball together playing for the Hill Country Hawks in the fourth grade. Phillips was already acclimated to the sports world, being distracted by softball, and was unsure of taking on another sport. But the two eventually convinced each other to go try out for the Hawks.

Later in the school year, you could often find the two young girls dressed up in their team gear entering the classroom with a smile on their faces. They were twins.

“I just think we can really relate to each other, we both had that competitive attitude,” Phillips said. “Just building that connection through the sport as well as in school it just clicked, like we’ve just been close ever since then.”

Presley’s father soon became the head coach of the Hawks. Phillips learned to set screens, roll to the basket and finish through contact, while Presley practiced her ball-handling and perfected her basketball IQ. They instantly became pick-and-roll masters.

It’s proved useful as the juniors have come together for the Lady Rattlers this season.

“(On the Hawks), our offense was a five-out and I would go set a screen for Kayla and I would roll. And at that time, I was like a whole foot taller than everybody else, so she would just have to throw it up in the air and I would catch it,” Phillips said. “I think now with that and my shooting being better, it allows her to drive off of my rolls and I can pop and shoot or she can shoot and I roll. It just works together pretty well.”

But it wasn’t an easy journey. Presley had to make a pit-stop at Kyle Lehman her first two years of high school, where she would no longer have her partner in crime to dime off pocket passes to.

This season, fate brought the two back together after Kayla’s mother, Denisha Presley, was hired to be San Marcos’ new principal. When the longtime friends found out they would be reuniting where it all started, it was like they never missed a beat.

“I was just in complete shock and it was just pure excitement,” Presley said. “I was like, ‘Oh my goodness, we already have chemistry, everything’s gonna be good, I’m not gonna have to struggle to build that bond with a new team. Just dust off some cobwebs and we’ll be good.’ I was excited to have my go-to person.”

“Whenever we heard that (Denisha) was going to be the principal here, we were pretty sure Kayla was going to come too, as long as all the UIL paperwork was filled out and it was just really exciting because we’ve done some training together in the summer,” Phillips said. “Just like doing pick-and-rolls and those drills, we could still tell the connection was still there after not being together for two years.”

The two years apart were like losing the final piece to a puzzle you had already put together a million times. It was a pick-and-no roll.

Once the two joined forces again, the connection was instantly there. The two started to take notice of the changes each of them made since joining the varsity ranks.

“(Faith’s) pull-up is so beautiful. Like, I even aspire to have a good pull-up like her,” Presley praised. “Her shot and her pull-up game is so amazing and has gotten so much better from when we were in the fifth grade where she would just stand and shoot over everybody to where now she can jump and elevate and shoot over people, it’s so perfect.”

“(Kayla’s) ball-handling is crazy. Like she’s known around the state and her ability to break presses and stuff like that is just crazy from whenever we were little,” Phillips said. “Whenever we were little, she would still fall on the floor four or five times a game and she still does it now. It’s like you're still the same person but her skill level has evolved tremendously.”

Their girls’ parents have supported their daughters since the beginning of friendship to now. They’ve been able to watch them grow in every aspect of life by raising them in their footsteps. Faith’s mother, Wendy Medcalf, has an interesting perspective on why these two connect together so well on the court.

“From the outside looking in, I think what’s really cool to see is they have opposite views on the court. Kayla’s always up top, Faith is usually in the back and I think that’s so helpful because they feed off of each other really well,” Medcalf said. “I think they recognize when the other might be getting into trouble or need their help, you can tell that they look out for each other in that.”

With the 2019-20 season concluding on Tuesday, the pair now has a chance to be the solidified leaders of the Lady Rattlers next year. It will be a new role for two of the top players in the district.

But in the final season of their careers, they realize this could be the final time the two share the floor. Presley and Phillips are prepared to go through another stage in their careers together just like they have been doing since they were kids.

“It's gonna be very emotional. Very emotional. I just want us to thrive and play the best that we can,” Presley said. “I’m looking forward to it and I know that it's gonna be a very big role for us and we’ve been working for it ever since we were little kids.”

And whether the two are separated on different teams, trying to copy each others dance moves on a jumbotron or wearing matching uniforms to school, Kayla and Faith’s friendship on and off of the court truly is a bond that will never be broken.