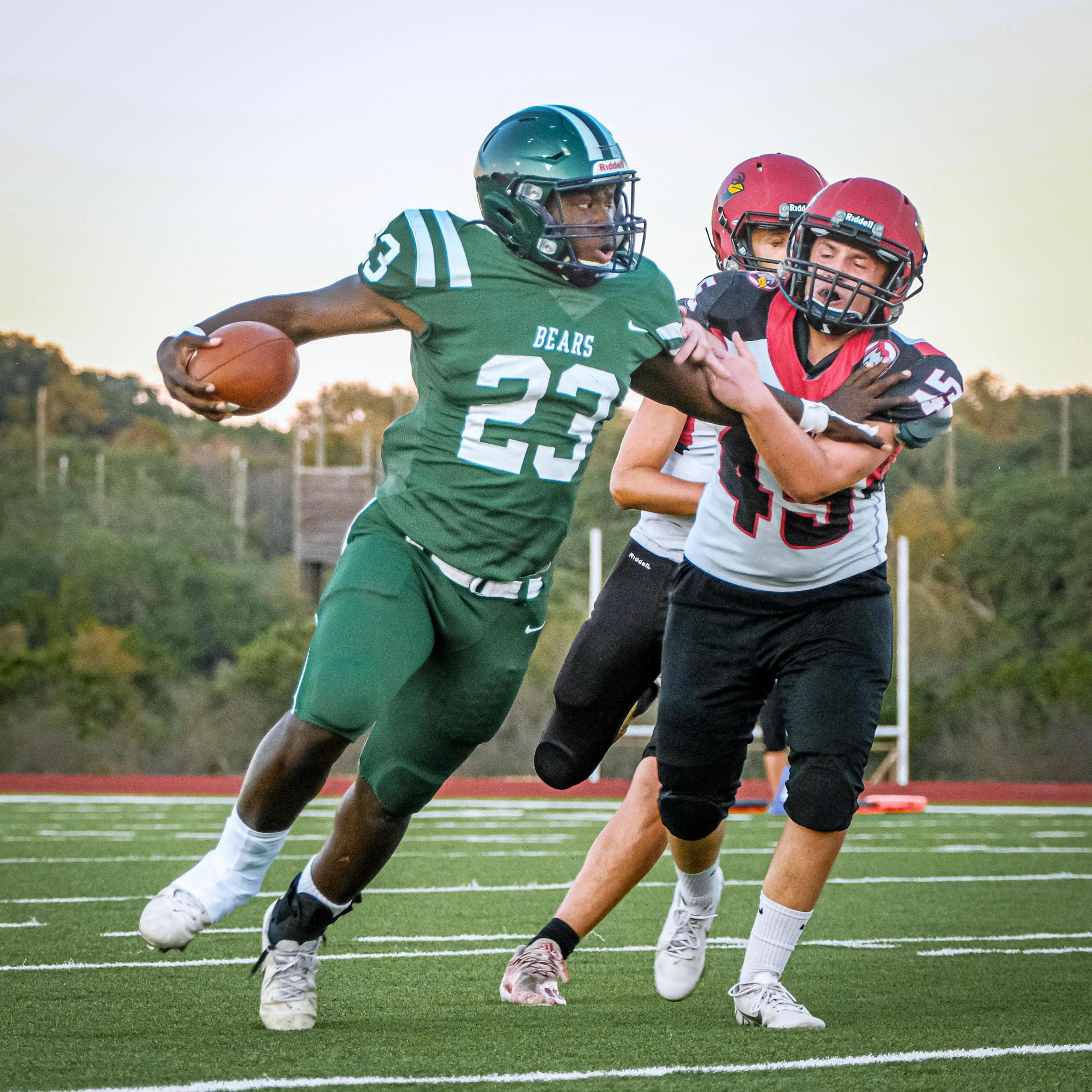 Junior Wilson Guenther (No. 23) shoved aside a defender with ease for a big gain. Two plays later he put a touchdown on the board. Photo courtesy of Marcus McDonald, submitted by Shelley Henry

Last week was a quick start for the San Marcos Academy Bears. This week, facing the Concordia Cardinals under the Friday night lights at McCoy-Remme Athletic Complex, it approached light speed, resulting in a 74-0 victory over the Cardinals (2-2).

Junior Cole Krackau took the short opening kickoff and crossed the goal line after only 19 ticks off of the clock. Krackau had another huge night and finished with two touchdowns, six tackles and five quarterback pressures.

The other half of the two-way dynamic duo dialing up the heat in the Cardinal’s backfield was senior Chizi Efobi. He racked up seven tackles, including four for a loss, three quarterback pressures, a pick six and an offensive touchdown where his elusiveness was on full display. Despite his valiant individual performance, Efobi was more concerned with the team win. He stressed “Trust (in) other teammates to do their job,” and being fully prepared for the game. Regarding his interception he, “wasn’t looking for any picks, (he) was looking for teamwork, but when it happened it felt amazing.”

The whole team contributed. Eight different players scored touchdowns. One of those touchdowns felt like a victory in itself to junior Wilson Guenther. He returned after missing three weeks due to an ankle injury, but showed no signs of lingering problems with several charismatic runs bowling over defenders. When he ran he “felt no pain, just good smooth strides into the endzone.” Most of all, Guenther was “great(ful) to be out back with (the) boys,” and contribute to the win.

Other major contributions came from senior Mason Loep, who had 3 pass deflections and several raucous tackles, junior T.J. Murphy and sophomore C.J. Crauthers. Murphy was a heat-seeking missile, and every one of his blows flattened the ball carrier. Crauthers had an interception returned to the one-inch line and four tackles. Tackles for a loss were in abundance with nearly 50% of the hits from the Bears completed behind the line of scrimmage. All of the scoring was done in one half of football, because of the game stoppage rule. The home team scored at an impressive rate of roughly a touchdown every two minutes. 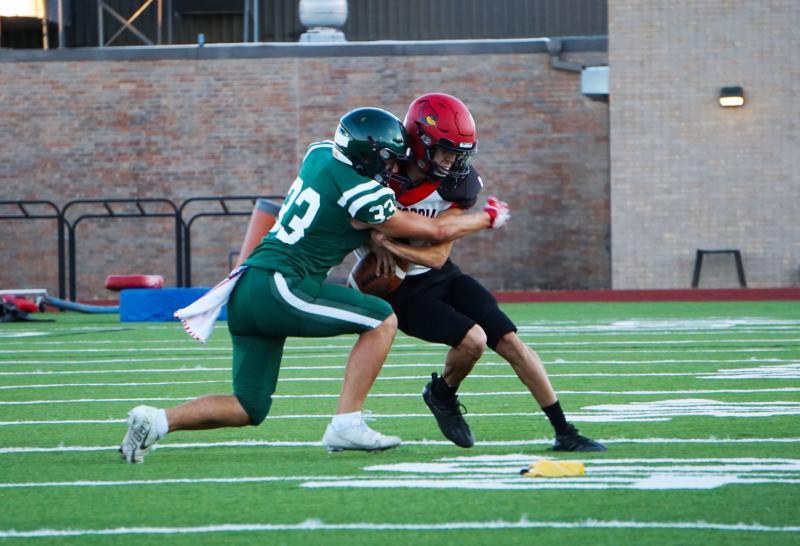 Junior Wilson Guenther (No. 33) shoved aside a defender with ease for a big gain. Two plays later he put a touchdown on the board. Photo courtesy of Marcus McDonald, submitted by Shelley Henry

“The (players) responding and trending in the right direction. It’s been a good couple of weeks,” head coach Chris Chacon said. “In six man football special teams (are) absolutely key. A significant difference between 11 (players) and six (is) achieving a PAT, it’s two points. Going into district, and playoffs later, that can mean a huge difference in the game, so we’ve been focusing on that. It helps to have Inaki Infante-Valenzuela (who) can boot it out (of the end zone on kickoffs).”

The Bears (4-1) look to continue their dominance, this time away from home, against Marble Falls Faith Academy (4-0), another district opponent. Kickoff next week is slated for 7 p.m.