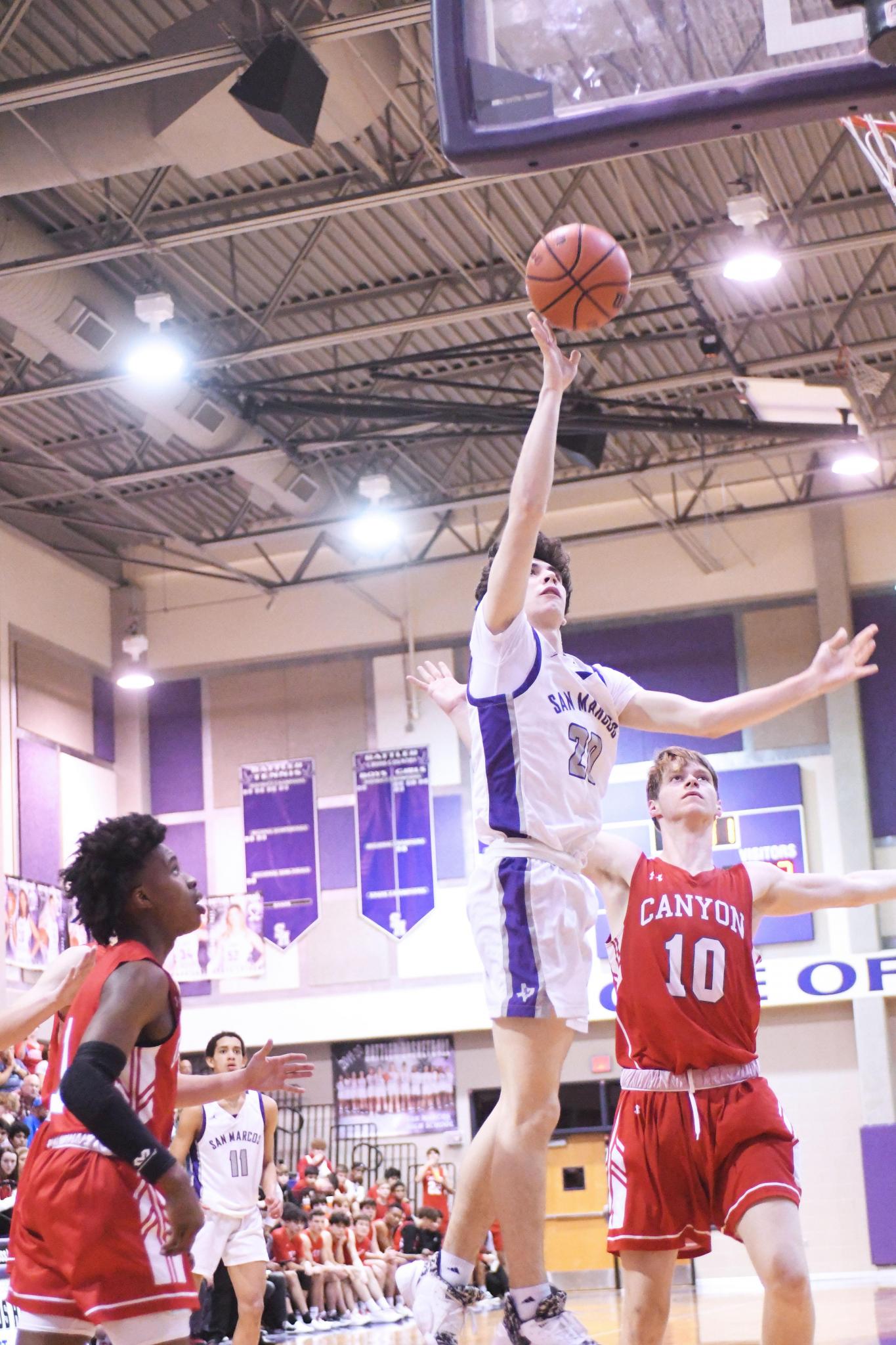 San Marcos (15-19, 3-11 district) trailed by as many as 18 points in the first half. At the start of the fourth, down 11 on Senior Night, the team was determined to win the final game of the season.

For the first time with 1:50 left, freshman forward Malik Presley used a pro-hop to avoid drawing a charge and finished over the middle with a left-handed floater. The bucket put San Marcos up 58-56 in the midst of a 17-4 run. New Braunfels Canyon (8-25, 1-13) was trapped in the teeth of the Rattlers and the final strike was fatal as the purple and white dominated the fourth in the 65-58 win in the regular season finale.

Senior guard Sam Johnson knew the night was special and throughout the entirety of the game, the veterans of the team wanted to go out with a win.

“We just thought we gotta keep pushing, we gotta be tough,” Johnson said. “This is our last night, we gotta do it for the seniors. So that's what we did, we just push through, we just get that in the back of our mind, like this is our last game. We gotta show out, so that's exactly what we did.”

Canyon came out firing, hitting four 3-pointers in the first quarter and continued to stay hot deep into the second. The Cougars held San Marcos scoreless for three minutes, while simultaneously constructing a 10-0 run of their own.

The run put San Marcos in a bind, trailing 34-16. But then something clicked. Once the Rattlers followed their initial game plan a 9-0 run ensued and cut the Canyon lead in half.

“We got to speed them up, we gotta run, we gotta jump, we gotta make them turn over and when we started doing those things, we went on a heck of a run. And that's how you beat them,” head coach Steven Pinchback explained to his team. “I didn't think they could handle the pressure that well and they didn't. Kids are kids, they forget what's going on, sometimes they forget the game plan but when they woke up and stuck to it, we did fine.”

Freshman guard Malik Presley caused havoc for the Cougars’ 3-2 zone in the middle. The freshman scored 18 of his 22 points in a dominant second half performance, laying it all on the line for his seniors.

“(The) middle was open but I told the guys, ‘We gotta attack one side, we're setting up too far back. Put a little pressure to him. Once you get a guy to commit, drop it to Malik and the bottom guy’s gotta be ready for a pass or he's going to go to the basket or shoot it,’” Pinchback said. “It's not rocket science. They just had to settle down a little bit and do what we've been telling them and coaching them to do. And they did it and he didn't really know they tried to go man, I'm waiting on them to go man. Soon as they went man, we went right by the guy, so he knew what he had to do. We had to switch it back up but it was just about believing in what we got going. That's all.”

Even down by double-digits heading into the fourth, the Rattlers solved the puzzle and the masterpiece was complete in the result of a 65-58 win, which snapped a nine-game losing streak for San Marcos.

“After a full season with this squad, we know what we have,” senior guard Josh DeLeon said. “Any game down however much we are down, we never felt like we're out of any game. And so we just gotta keep pushing and that's what we did.”

Presley finished with a game-high 22 points, followed by DeLeon, who finished with 14 points in his last game as a Rattler. Senior guard Joey Hernandez added seven more.

San Marcos ends the season on a high note with a win but Pinchback already has his sights on getting better in the offseason.

“It's a new era. We started building this year. So when we come back, it's a new era and we got some good young talent. We're going to make some noise,” Pinchback said. “But I told the guys, ‘We're going to work you this offseason like you've never worked before.’ We have a full off-season to do those things, so I'm excited and the sky's the limit.”