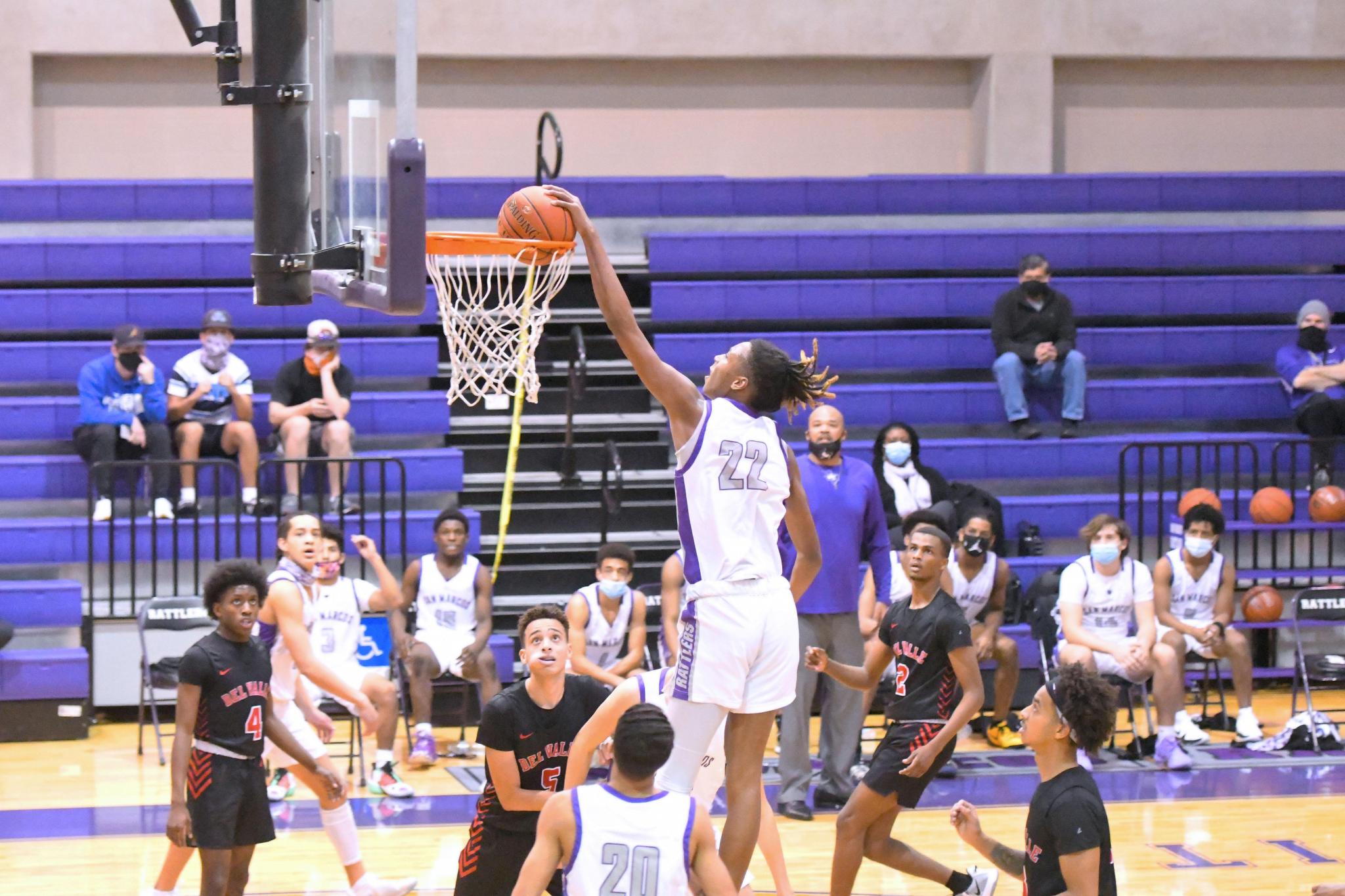 This is the toughest week physically and mentally for San Marcos as the team had to return to the floor after a short hiatus against the beginning of its district schedule. The purple and white began its long week with a convincing 20-point win over Austin High on Monday. The team followed that up by defeating a scrappy Del Valle team on Tuesday, 74-66, moving San Marcos to 3-0 in district play.

The Rattlers have seen two or more games in a week this season only one time, giving players the necessary tools to rest and prepare for the next game. But this week is much different. Three games on the schedule mean more tread on the players’ legs but head coach Steven Pinchback believes his team has been preparing for these tough stretches in practice throughout the year.

“We haven’t played a lot of games. We’re only eight games deep, we’re good, we’re fresh. Our guys play a lot but we push them in practice so we’re able to play. I mean, you saw how we dominated in the fourth quarter. They’re not tired,” Pinchback said about his team. “I asked (Malik) if he needed a break and he was like, ‘No,’ but then coach Napoli gave him a break. I said ‘You got 45 seconds, have a seat then get back out there.’ These kids are so fun, just to be around these coaches, we all care about each other and it’s just a great environment and I’m just excited to be a Rattler, man.”

Most teams respect sophomore guard Kaden Gumbs’ speed up top by going into zone. Del Valle (5-5, 1-2 district) took an opposite approach going man-to-man pressure, forcing Gumbs to give the ball up earlier in positions. The pressure forced San Marcos into costly turnovers in the first half, putting them behind, 34-33, heading into the break.

The Rattlers were able to fight back and regain the lead back by five in the third, but the Cardinals opened the fourth with an 8-0 run before the hosts called timeout with 5:37 left. Once the Rattlers settled down their pace, the flood gates to the basket opened up with ease. Sophomore forward Malik Presley took advantage of his smaller matchups by getting to the rim at will and the drives allowed the hosts to get in their man press.

That adjustment flustered the guards of Del Valle, forcing them into multiple turnovers leading to Gumbs and Presley both recording and-ones in a 30-second span. The Cardinals hit their 11th 3-pointer of the game with 1:27 left to cut the Rattlers’ lead to 67-66. In the final minute, San Marcos held their opponent scoreless and Presley threw down the exclamation dunk from in front of the free throw line. Sophomore forward Mateus Perkins followed that up by blocking a shot into the stands, securing a 74-66 win.

Presley defined Perkins’ block as a “momentum-changer” in the midst of a tough game down the stretch. The forward also described what went through his head on his impressive dunk.

“I was just feeling a lot of adrenaline. We had all the momentum and I just wanted to feel the game out, you know just doing everything I can to be the best basketball player I can be,” Presley said.

Gumbs and Presley shared game-highs of 21 points each. Senior guard Mattayoi Montgomery chipped in nine points to go with his counterparts.

San Marcos’ (5-3, 3-0) three-game test ends with Austin Bowie (7-3, 1-2), who finished third in district play last year. This is without a doubt the toughest game of the home stretch for the purple and white, with Bowie bringing in last year’s District 25-6A defensive MVP Cade Holzman and First-Team All-District performer Colton Benson. Tip-off is scheduled for 6:30 p.m. inside the Snake Pit on Friday night. The Rattlers know what to expect but they believe if they stick to their routine, they can finish the week 3-0.

“Bowie is a good team. Colton is a good scorer so we’re just going to do what we do,” Presley said. “Play good defense, contest shots, get out there on all of the other shooters and play fast.”