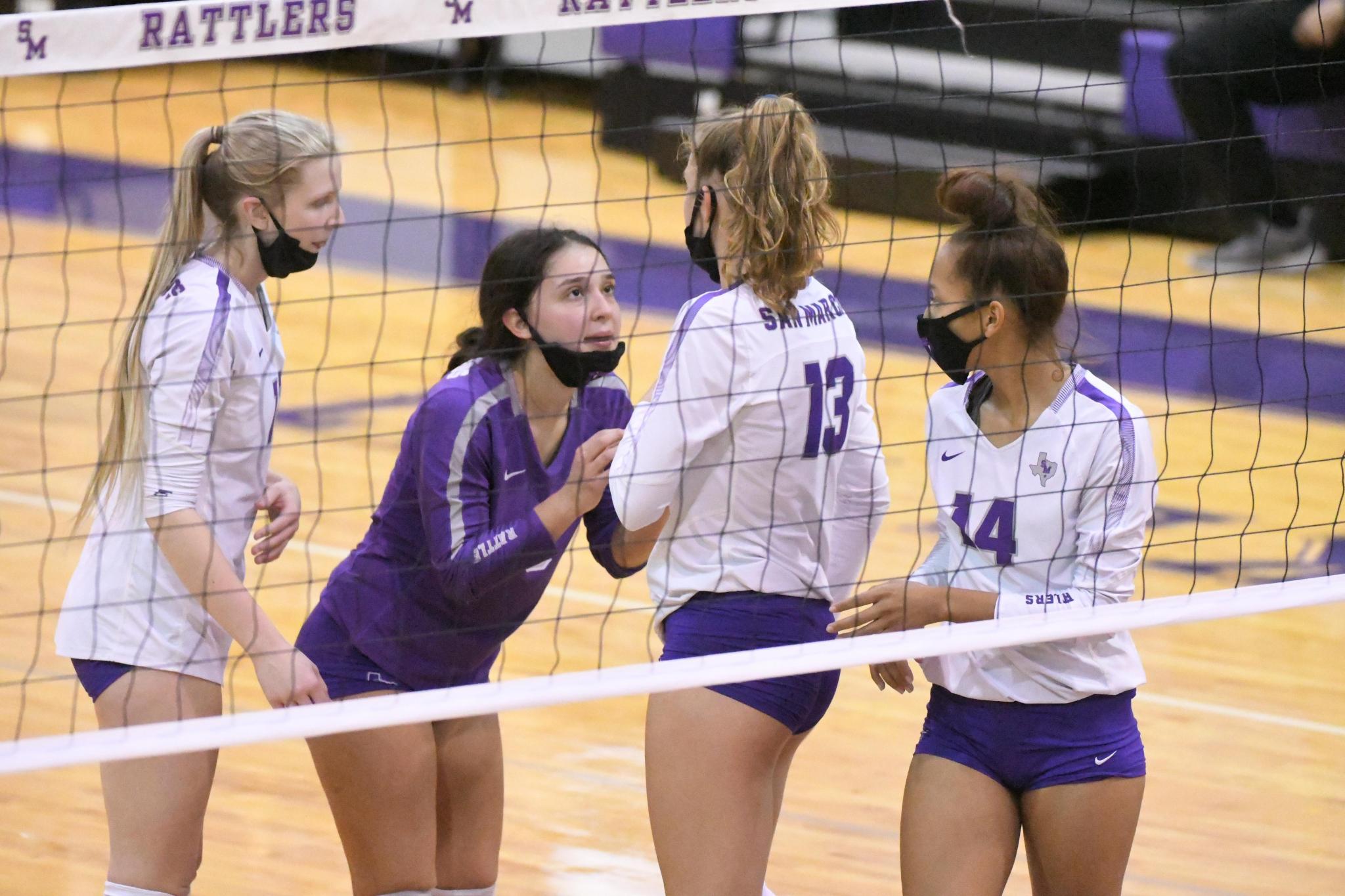 Head coach Jared Te’o thinks these losses were valuable learning lessons for the team’s match next week. Wrapping up the regular season with a series against the two top teams in the district is good preparation for the playoffs.

”I think Lake Travis and Westlake are the standard. For us, this year has been being able to do it against one of the best teams. It’s good practice for us,” Te’o said. “I’m proud, I just always see room for improvement. I want to tell them good job but also I’m like, ‘We could have won some of those sets against those high-level teams.’ But overall, very happy.”

The score juggled back and forth as no team scored consecutive points until the Chaparrals took an 11-9 lead. Junior outside hitter Maggie Walsh tied things up with an ace. Her counterpart, senior outside hitter Layla Diaz, sparked a run for the Rattler offense. San Marcos got glued to 16 as Westlake recorded six unanswered points. The run was too much for the host, forcing them to drop the first set 25-17.

An impressive second set from both teams that came down to a controversial call that had Te’o livid on the sidelines. San Marcos had momentum but the double that wasn’t called might’ve boosted its opponents confidence in the end.

”I think, you know, no one call or two calls is going to determine a match, but volleyball is very much a momentum game. You’ll hear any coach say anything can happen. Confidence can change, people can get in their head,” Te’o said. “It was a crucial moment but I told our girl,s our main focus (Friday) and (Saturday) was to try to get a little better at something and regardless with the refs’ call. It’s irrelevant to what they’re doing. So I try to let them let me get angry and they stay calm.”

Although the call made the score 22-21 in favor of Westlake, Walsh and her team fought to tie the score at 25 after her kill down the left out-of-bounds line. But the visitors went to their ace senior outside hitter Katie Hashman to close it out 27-25.

Walsh was on fire early in the third set, scoring on four of the first seven points. The offensive firepower led to San Marcos’ largest lead of the day by score of 7-2. After the visitors called timeout, the momentum completely shifted. Westlake went on to outscore the Lady Rattlers 23-7 and secure the second seed in the playoffs.

Te’o understands his team lacks playoff experience, but with a lot of youth on his team, the coach thinks seeing what this setting brings to the team will be a motivation factor for years to come.

“I just want to see them enjoy it, you know it’s a moment and I think you don’t know how to play in the playoffs until you’ve played in the playoffs. I think, especially for underclassmen, taking some ownership of what we need to be doing and just getting exposure to that atmosphere, because it’s a lot of fun.” Te’o said. ”It’s going to be different this year because of covid but I think just getting a taste of what it’s like to be in the playoffs, hopefully that’ll get them some more hunger to be back next year.”

Seniors Gabriella Medellin, Riley Dow, Julia Antu, Samantha Booth, Robin Ramos and Diaz all played in their final home game of the season and it didn’t hit home until the last couple of points.

“I definitely wish we would have left a home game out with a win but it’s very sad,” Diaz said. “To be honest, I didn’t think that I’d be playing my last home game until I realized the last couple points like, ‘Wow this is our last game.’”

Although it was their last official home game, playoffs start Friday against Austin Vandegrift at 6:30 p.m. Diaz made sure to let Rattler Nation know they still have some fight left.