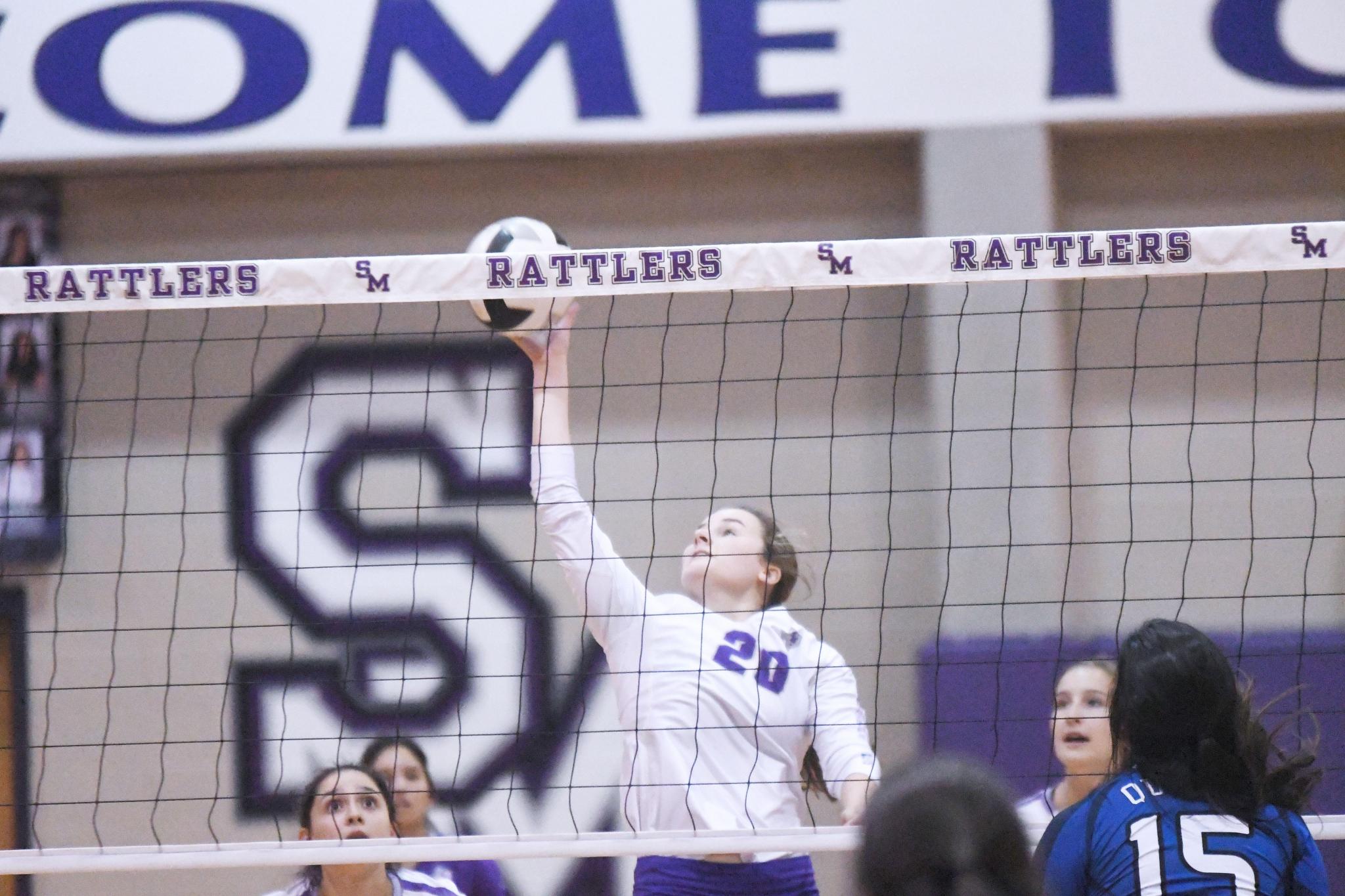 The team played hard until the very end, losing each set by less than five points on the road in a hostile environment.

“I thought we fought all the way through, they made mistakes, we made mistakes, regardless of what the score was, these girls were battling and fighting back,” head coach Michelle Moreno said. “It's tough when you lose a tight one like this, but the energy was great in the gym, the girls stayed focus on the court and didn’t let outside things distract them so again focus is just how they fought through.”

MacArthur opened up the set with a 2-0 lead before junior outside hitter Layla Diaz scored three of the first four points to put San Marcos on the board. Those kills sparked a run for the visitors. Freshman middle blocker Liana Guerra recorded two spikes during the run that gave her team the lead for the first time in the game, 8-7.

Midway through the match, junior middle hitter Samantha Booth did just what her job entails. Booth received back-to-back passes from junior setter Julia Antu that resulted in scores for her team. The Lady Brahmas retaliated with four consecutive points which gave them their first lead since earlier in the set. After a couple of miscues by the Lady Rattler offense, the team couldn’t put together enough to take the set, rewarding the home team with the win, 25-22.

The purple and white found themselves in a hole in the second set when the home team jumped out to a 9-4 lead, forcing a timeout.

San Marcos didn't allow the score to affect its psyche. Antu assisted Diaz, whose spike sent the ball directly to the right corner of the court, which gave the team some hope. A 4-0 run silenced the crowd and put all the pressure on the home team to get back into it.

With the score sitting at 23-19, it seemed as if San Marcos had the set in hand. The hosts hung around, though. They cut the deficit in half before Antu’s final kill of the set gave her team the win, 25-21.

The third set turned out the be the most important for both teams. Antu continued her precise passing, assisting junior outside hitter Riley Dow from out of bounds to put her team ahead, 3-1.

The hosts regained the lead and never looked back. Each time the Lady Rattlers tried to storm back into it, MacArthur made a timely score, halting any chances of coming back. And though the Lady Brahmas held the lead for the rest of the set, it wasn’t easy.

Even while trailing by six, senior setter Jade Olivo put her body on the line in order to save the ball from bouncing out of bounds, which led to another kill that helped start a run for San Marcos.

Captain and senior outside hitter Jordan Helbig was a bright spot for the team. She contributed seven kills on the night with more than half of them coming during the third set. The instant offense from the senior was enough to help her team cut MacArthur’s lead to two before the Lady Brahmas could close out the set, 25-22.

The Lady Rattlers came out swinging with even more intensity with the game on the line. Sophomore middle blocker Emery Jones set the tone with two tip passes over the middle that had the home team stuck in the mud as it tried to get to the ball. Shortly after, Diaz got involved by scoring three consecutive kills for her team as they took the 9-4 advantage as MacArthur called timeout.

The visitors’ momentum didn’t slow down out of the break, as they maintained a five-point lead until the 15th point of the fourth set.

But the Lady Brahmas wouldn’t go away. MacArthur junior outside hitter Sierra Foster had a momentum-changing kill that ignited the team and the home crowd. Immediately after, the team started to chip away at San Marcos’ lead until it finally grabbed it, 22-21, its first of the set.

The Lady Rattlers responded by taking the lead back after Olivo recorded their final point of the night but it wasn’t enough to force a final set. The hosts took advantage of the mistakes made by the visitors at the net and closed the game out, 25-23.

San Marcos’ loss ends its win-streak at two. The Lady Rattlers will open up district play this Friday against San Antonio East Central at 7 p.m. inside the Snake Pit. With non-district play coming to an end, Moreno knows what's in store for the next couple of weeks.