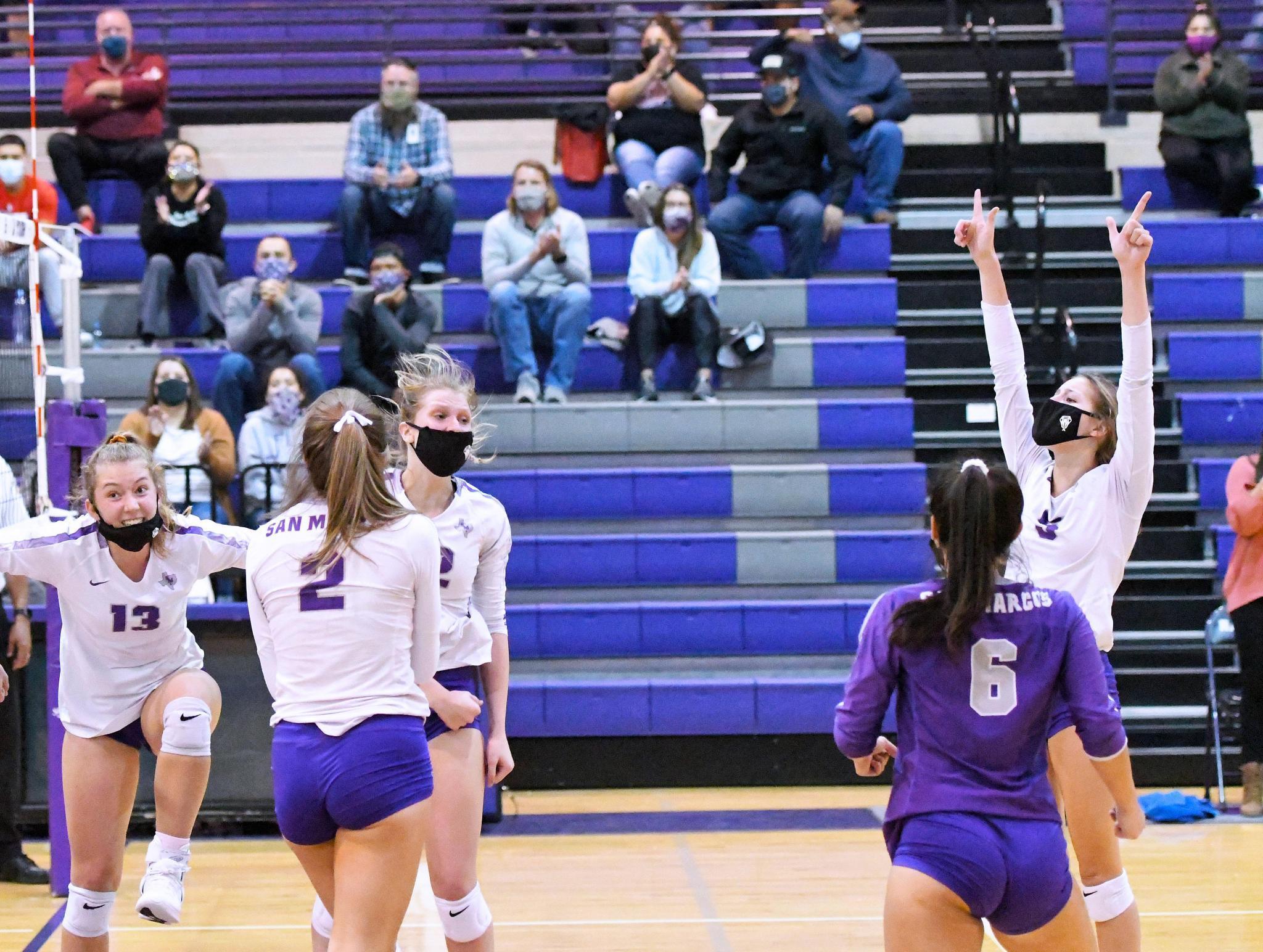 San Marcos head coach Jared Te’o’s relationship with Austin Vandegrift head coach Melissa Southall dates back six years ago when Te’o used to come down from Dallas to Austin and coach in her summer camps. They became friends instantly but now their friendship will be put on hold as their teams meet in the playoffs on Friday night.

Southall saw potential in the San Marcos coach and hired him to coach Four Points Middle School for a year after Te’o used to coach a club team called Dallas TAV. They also work closely together throughout the summer coaching another club team called Austin Juniors Volleyball.

“I wanted to move down here, and I wasn't really sure what I wanted to do. She was like ‘You can come teach at my middle school and coach the middle school girls just to get down here so I did for a year,’” Te’o said. “And she took a chance and hired me and we've been friends ever since.”

It all comes full circle when the two coaches meet in the playoffs. Vandegrift sports a tough junior outside hitter in Samantha Wunsch who can destroy the ball given a good opportunity. The lefty leads the team with 214 kills and 3.7 kills per set. In practice this week, Te'o brought in Omar Zabaneh, who played volleyball in Jordan growing up, to simulate the play of the hard-hitting lefty. His power and jumping ability tested the girls all week. In practice, he scored five consecutive kills.

Te’o said Vandegrift is going to score points on big kills but it’s how his team will respond and score back that will make the difference.

“(Zabaneh) just does everything really well. I tell our girls, ‘We are really good against good teams and then we play a great team who has a player who can just kind of put the ball away at will and we don't really respond,’” Te’o said. “If they're gonna get their points, we just have to make sure we're scoring as well. They did a really good job after he went on a five-kill streak that they did the same thing and Maggie (Walsh) did it as well as Layla (Diaz). So it's like people are going to score and earn points. You have to respond and earn points as well.”

On film, the staff in the purple and white said they really had a hard time finding a place to exploit against their opponent.

“They have a really good libero, and their right sides, a lefty and she’s touching over 10 feet so that poses a different threat than we're used to. And just her being a lefty kind of changes things. Lefties are always harder to defend in anything,” Te’o said. “There's some youth on their team. And we have youth as well, but maybe we can put them in some uncomfortable positions. But they have lots of good players. We will just have to serve really tough.”

One area of the floor to look out for are the middles in this game. San Marcos has never had a game where the opponent’s middles are the same height or shorter than they are, which poses a significant role in avoiding blocks and allowing the outsides to feast. Senior and junior middle blockers Samantha Booth and Emery Jones, respectively, have been key components of the Rattlers’ success and will need to continue their stretch of good play if they want to upset the No. 1 seed from District 25-6A.

Jones knows what the game plan is because of this newly found advantage and will look to exploit one of the minor weaknesses in Vandegrift's game.

“Coach (Te’o) calls it ‘thumbs up, thumbs down,’ which is like hitting those corners, avoiding the block, basically because we're not the biggest middle (blockers). So this week, we're going up against smaller middles, which is the first time for the whole season,” Jones said. “That’s why we're trying to run us more basically because we have that option.”

Although the Vipers bring more postseason experience to the table, returning eight players who played in the team’s three-game playoff run last year, San Marcos has senior libero and Western Colorado commit Julia Antu leading the team into the playoffs, a place she’s been before.

Antu went through the pressures of preparing for a playoff match when she was on the San Marcos team that made the last playoff appearance in 2017. She’s spent the last week helping her younger teammates on how to approach the biggest game of their careers.

“Just to go into it with confidence,” Antu told her team. “Jared (Te’o) this whole week in practice was saying how like, it has to be our best game, and just play leave everything on the court and it could possibly be our last game.”