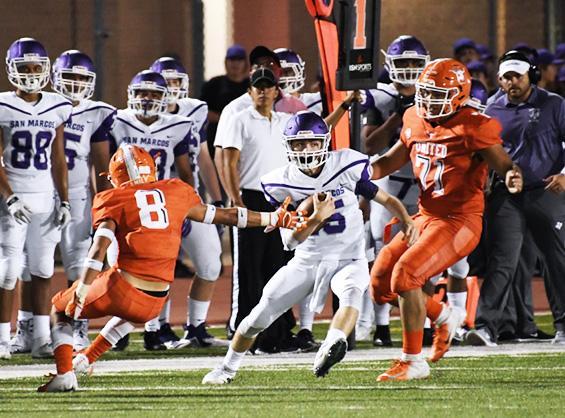 LAREDO — Late in the first half, San Marcos found itself in a familiar place — Trailing.

Starting slow has been one of the Rattlers’ biggest issues this year. They’ve never been the first to score in any game this season. The team has a reputation for pulling off big comebacks, though, winning three games last year when trailing at the half. But it hadn’t been able to do so in its first two losses to Buda Hays and San Antonio Johnson.

On Thursday night, San Marcos pulled it off. The team completed a 28-point comeback to earn its first victory of the season over Laredo United at the Bill Johnson Student Activity Complex in Laredo, 50-49.

Down 35-7 with under five minutes left in the second quarter, the Rattlers appeared to be stopped in their tracks on their own 44-yard line. But on 4th and 4, senior running back Jamon Johnson received a direct snap on a fake punt and burst up the field for 17 yards, keeping the drive alive.

Junior quarterback Alex Garcia led the team the rest of the way, completing two passes for 32 yards then punching into the endzone from seven yards out.

“I just trusted what my coaches were telling me,” Garcia said. “I believed in my teammates and myself. I just did what I had to do. I just trusted everything.”

San Marcos got the ball back after keeping United senior quarterback/wide receiver Jorge Murillo inches away from the first down marker on 4th and 7. On the next drive, the team marched 46 yards on 8 plays to the Longhorns’ 25-yard line. Garcia fired a deep pass intended for senior receiver Mhyson Williams.

United senior defensive back Jack Sanchez picked him off, charged in the opposite direction and was brought down within the 20. However, another Longhorn defensive back was flagged for blocking Williams in the back in the endzone, resulting in a safety. The Rattlers picked up another two points and got the ball back, but weren’t able to score before the half ended.

During the break, the players reminded themselves that they’ve been in this situation before.

They did have it. San Marcos began the second half with an onside kick that it recovered on the Longhorns’ 49-yard line. Two plays later, Garcia hit Johnson on a swing route to the right, who took the ball to the house, cutting the lead to 35-22.

United nearly scored another two after blocking the extra point attempt and scooping the ball back up. But senior kicker Francisco Menchaca knocked the runner out of bounds around the 10-yard line, narrowly avoiding disaster.

The Rattlers held off the Longhorns on fourth down again and handed the ball off the Johnson for another carry. The senior stiff armed three United defenders and cashed in again, this time for an 80-yard score.

San Marcos scored one more time before the end of the third quarter, with two big throws from Garcia — one to junior tight end Ronnie Perez for 38 yards and another to junior receiver Diego Cruz for a 39-yard touchdown. The team had completed the comeback and, for the first time all season, taken the lead, 36-35.

The game wasn’t over quite yet, though. Murillo took the lead back for the Longhorns with a 53-yard touchdown reception to begin the fourth quarter. He took a direct snap on the 2-point conversion attempt, fumbled, then fell back on the ball in the endzone.

San Marcos countered with a 35-yard touchdown catch from Cruz, but Murillo scored again with a 35-yarder of his own. However, the Longhorns missed the extra point and led 49-43 with six minutes left in the game.

The Rattlers took their time. They used 10 plays to go 57 yards down to United’s 9-yard line. On 3rd and 9, Garcia found junior Takai Madgett on a slant route, who busted in for six. Menchaca nailed the extra point, giving San Marcos a one-point lead.

“I was like 150 percent. I knew (we would score),” Garcia said. “I saw they were just manned up. So, I saw a slant and I knew Takai could beat anyone.”

The Longhorns got the ball back with 54 seconds remaining. Their first pass went incomplete. Their next pass was picked off by Gonzales, sealing the 50-49 victory for San Marcos.

“We were playing a zone coverage and I saw my guy go do a 5-yard out and I saw the quarterback pump fake to him,” Gonzales said. “And I knew behind me, I had a curl. So, I knew to stick foot, go back, trusted my boys over the top.”

It was exactly the kind of win the team needed as it enters into district play. The Rattlers (1-2) will head to East Central next Friday to take on the Hornets at 7:30 p.m.