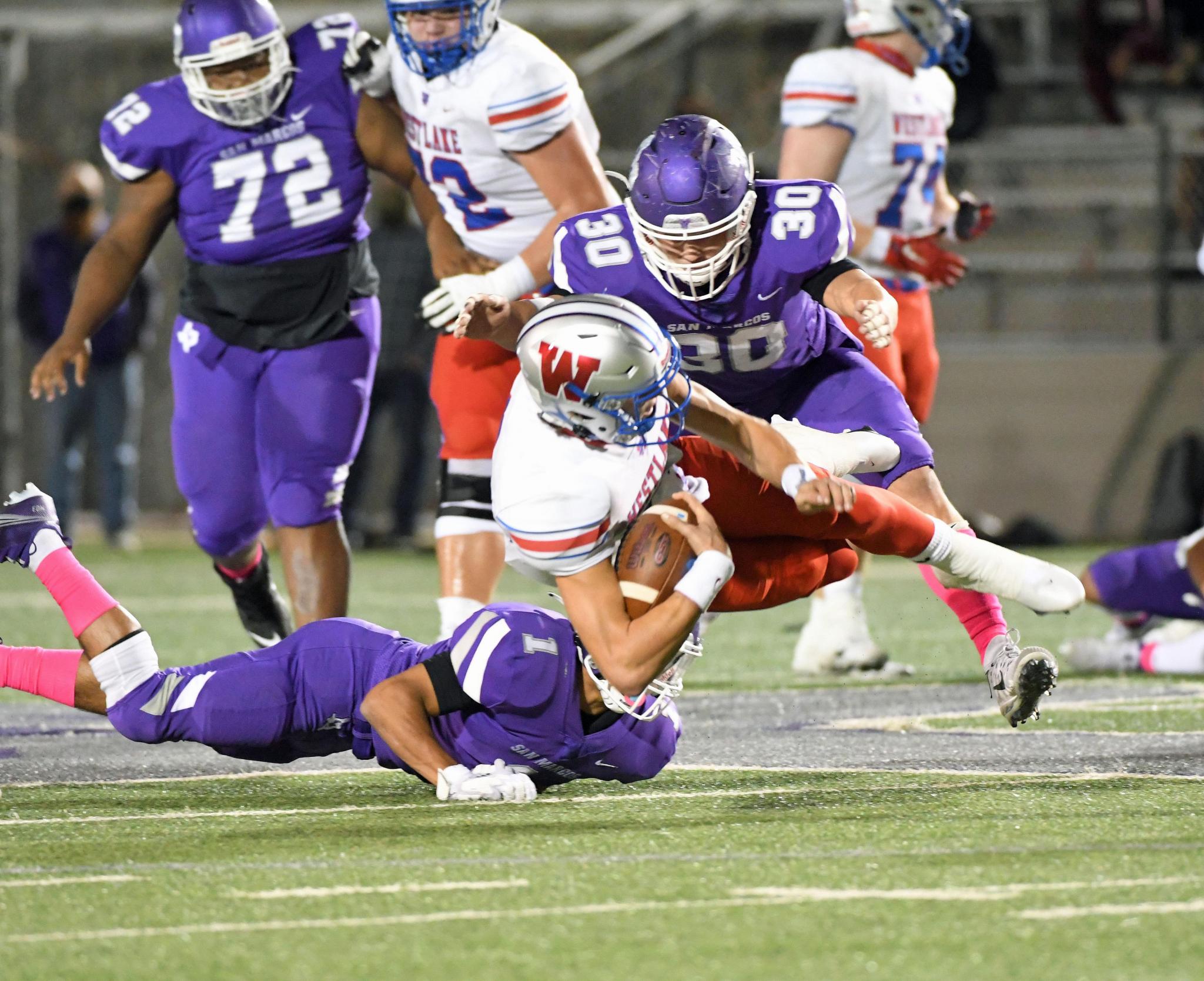 San Marcos shut out against Westlake, 56-0

San Marcos head coach John Walsh set the goal to get through the toughest two games on the schedule without injuries. The team succeeded in that aspect but ultimately lost both games. No. 4 Austin Westlake (4-0, 2-0 District 26-6A) came into town and snagged another district win on Friday inside San Marcos Toyota Rattler Stadium, 56-0.

The Chaparrals haven't allowed a score in district play dating back to Nov. 1 of last season and did the same to the Rattlers (1-3, 0-2) in the shutout, but it wasn’t so much that the Westlake defense played great.

The San Marcos offense forced itself into unnecessary situations with an abundance of mistakes, which Walsh doesn't blame on youth. Six flags pushed the team back 30 yards in the first half and four fumbles gave the visitors the ammunition to take advantage on the offensive side of the ball.

“The scoreboard doesn't reflect anything positive if you're just an average viewer,” Walsh said. “Our defense plays lights out. We just put them on the field way too long. We got stops against the No. 4 team in the state and I think we would've got more stops if they weren’t so tired.”

After snuffing out the hosts’ game-opening onside kick attempt, Westlake began its first offensive possession with the ball on the 50-yard line. Junior quarterback Cade Klubnik found his main target, senior wide receiver Luke Niklos, on two passes for 15 yards. The Rattler defense held up and forced a 4th and 8 and Chaparrals sophomore kicker Charlie Barnett’s 43-yard field goal attempt was no good, causing a turnover on downs.

San Marcos cursed itself with two false start penalties and its first fumble of the night on the next possession. Westlake recovered the fumble, setting up a 22-yard touchdown from Klubnik to Niklos, the first score of the night for the defending champs.

Sophomore quarterback Isaiah Deleon scrambled out of the pocket later in the first quarter and was stripped by the Chaparrals' defense. The ball was picked up by state championship defensive MVP Michael Taaffe, who returned it to the Rattlers’ 13-yard line. Klubnik found some wiggle room two plays later on a 6-yard touchdown — his third of the night — which put the visitors up, 21-0.

Walsh knows what DeLeon is capable of and expects him to control the ball more in certain situations.

“Our quarterback had a rough night,” Walsh said. “We believe in him but he knows better than anyone that he has to play older and tougher, and he will.”

The Rattlers had their best chance of the night to put some puts on the board late in the third quarter. Guidry opened the drive on a 14-yard carry, followed by DeLeon completing a pass to junior wide receiver Nathan Henry for 10 yards on the sideline. But another false start penalty haunted the hosts, moving them back to the opponent’s 45-yard line. The purple and white went for it on 4th and 10 but the pass fell short in front of DeLeon's receiver.

The defense played well holding Westlake to 21 points in the second half compared to its 35 in the first, but Klubnik could not be stopped on the run-pass option. The junior quarterback punched in another score from one yard out on the next drive, finishing the game with two passing touchdowns and four rushing, sealing a 56-0 win on the road for his team.

Walsh said he’s had this Saturday marked on his calendar for a long time.

“Going back-to-back against Lake Travis and Westlake, the positive thing is the next people we push on will not feel like that. Those guys are trying to win titles, we're trying to get into playoffs,” Walsh said. “I said it back in June and back in July that I was looking forward to Oct. 17 because that's when our season really gets started.”