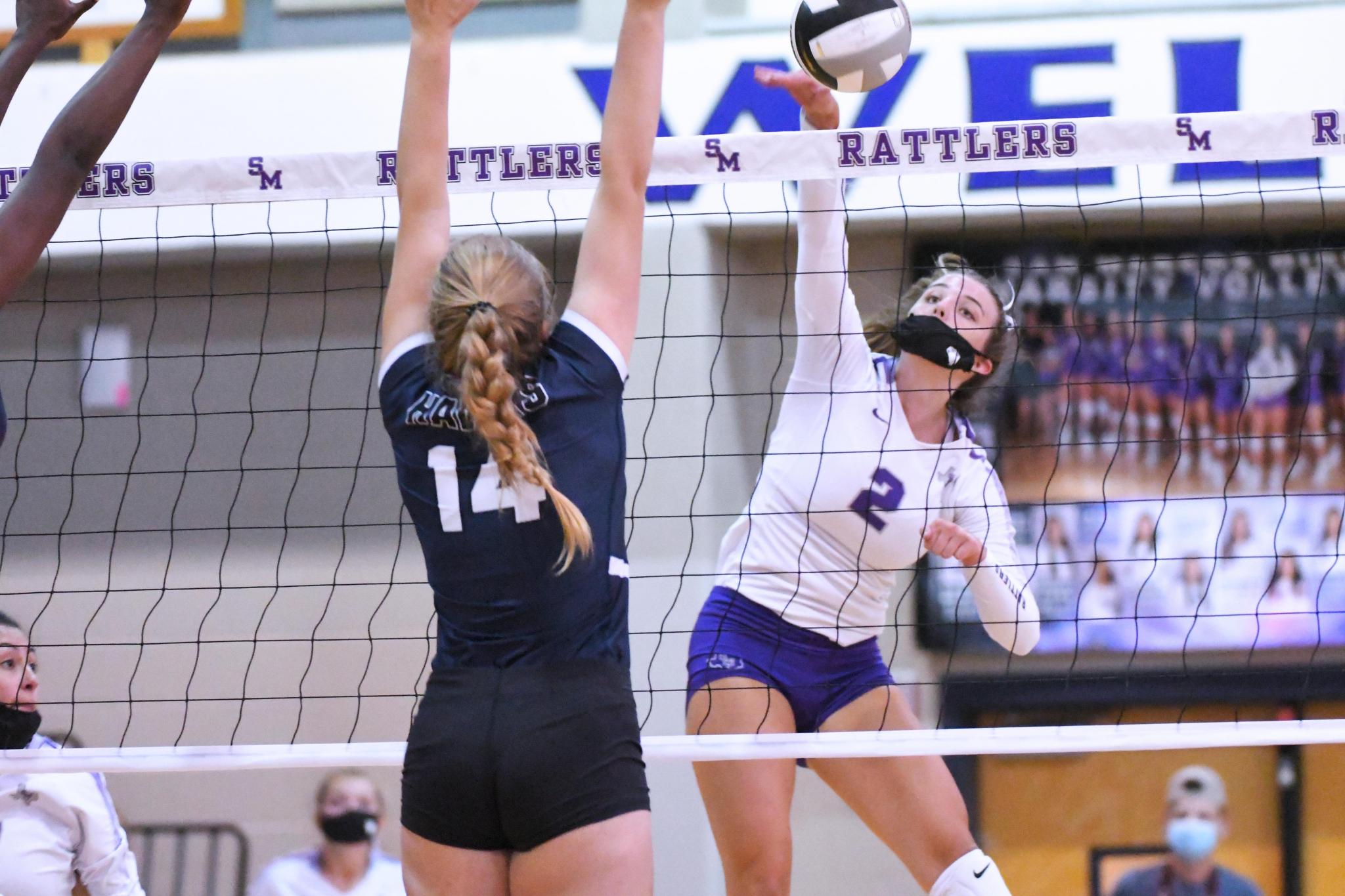 Before the 2020 season started, San Marcos head coach Jared Te’o asked his team what they wanted to be known for. The Lady Rattlers responded “feisty.”

“(When we went down 2-0), I was like ‘OK, I didn’t make that goal for you. You did,’” Te’o said. “So I kind of put the accountability back on them and said ‘You wanted to be a certain way. I can’t make you be feisty. I can give you gameplans, I can give you X’s and O’s.’ And I think that helped.”

Hendrickson took a tight first frame, 25-23, then played an almost-perfect set of volleyball in the second. San Marcos had no answer for the high-powered offense and struggled to find a rhythm. Once the Lady Hawks pulled away, 22-13, it would have taken a tremendous effort to fight back into it. Though the hosts scored two of the final three points, it wasn’t enough to stop the visitors from taking the second set, 25-15.

Junior outside hitter Maggie Walsh, making her debut for San Marcos, was dominant from everywhere on the floor. Walsh scored the initial kill in the third set for the purple and white with a cross-court shot that had defenders diving like baseball players into home plate. Hendrickson wasn’t wavered by the elite kill. The Lady Hawks responded every time San Marcos got momentum and eventually tied the game up at 10 all.

Walsh continued to display her versatility with back-to-back blocks at the net, giving her team the largest lead of the night, 16-11. After the ensuing Lady Hawks timeout, they continued to chip away at the lead. Senior Layla Diaz’s scoring added two kills to her name late in the set, giving the team set point. That’s when junior middle blocker Emery Jones blocked the Lady Hawks’ last shot to secure the 25-22 win in set three.

After dropping the first two sets, it seemed as if the players remembered the coach’s preseason speech in the midst of the battle. Te’o praised Walsh on her ability to do everything on the floor.

“Maggie’s a good all-around player, so there’s not a lot of players these days, even in the college game, that are six-rotation players. Offensively she’s great, she blocked the big right side, she digs, she passes but I’m gonna be very tough on her,” Te’o said. “There are still moments where I thought she could’ve done more. She played phenomenal, she was unstoppable and great. She never looks fazed. She just looks very calm and collected and I think a lot of that’s because her dad’s a football coach. But she cannot be bothered. (I’m) super excited she is on the team.”

The final frame gave the fans in the Snake Pit — operating at a 37% maximum capacity due to UIL regulations — everything they wanted in a volleyball game. Walsh and Jones flashed signs of a dynamic duo with a fiery block, cutting the visiting teams lead to 7-6. Sophomore setter Ruby Gordon dished out consecutive assists to keep the score knotted at 10-10. Senior libero Julia Antu dove to the floor to keep the ball alive, while Diaz capped the play by slightly tipping the ball over, tying the set up again at 22 all. Walsh wrapped her night up with another kill but a service error and an ace secured the set for the visitors, 26-24, and the match at 3-1.

Te’o is still learning the talent that he has on this team, which keeps him believing they could be a special group in San Marcos when district play rolls around.

“(I’m feeling) hopeful, a little disappointed. I think the thing I’m most hopeful about is they want it just as much as I do. The loss hurts them just as much. I think when you come from a record that’s not the best, you might think that the players would be used to losing. But you could tell they were very bummed about it,” Te’o explained. “So I’m hopeful. I think I have a lot of work to do. We’ve got the pieces, we just gotta get the match play.”

Walsh led the team with 22 kills during the match, followed by Diaz with seven and Jones with six and helped by Gordon’s 29 assists. Antu tallied 14 digs.

The purple and white will attempt to jump over the bar the team has now set. The Lady Rattlers take the court in a doubleheader on the road this Saturday against Pflugerville Connally and Brenham at 11:30 a.m. and 1 p.m., respectively. Te’o wants his team to avoid making the same mistakes repeatedly as the season progresses.

“So this weekend, make a mistake, it’s fine, it’s volleyball. Try not to make that same mistake twice,” Te’o said. “The coach from Brenham has a phenomenal coach (Debbie Yeager), very experienced and her team’s gonna come disciplined and ready to go. And Pflugerville Connally is one of Hendrickson’s rivals so it’s gonna be good. Big, athletic kids and well-coached.”