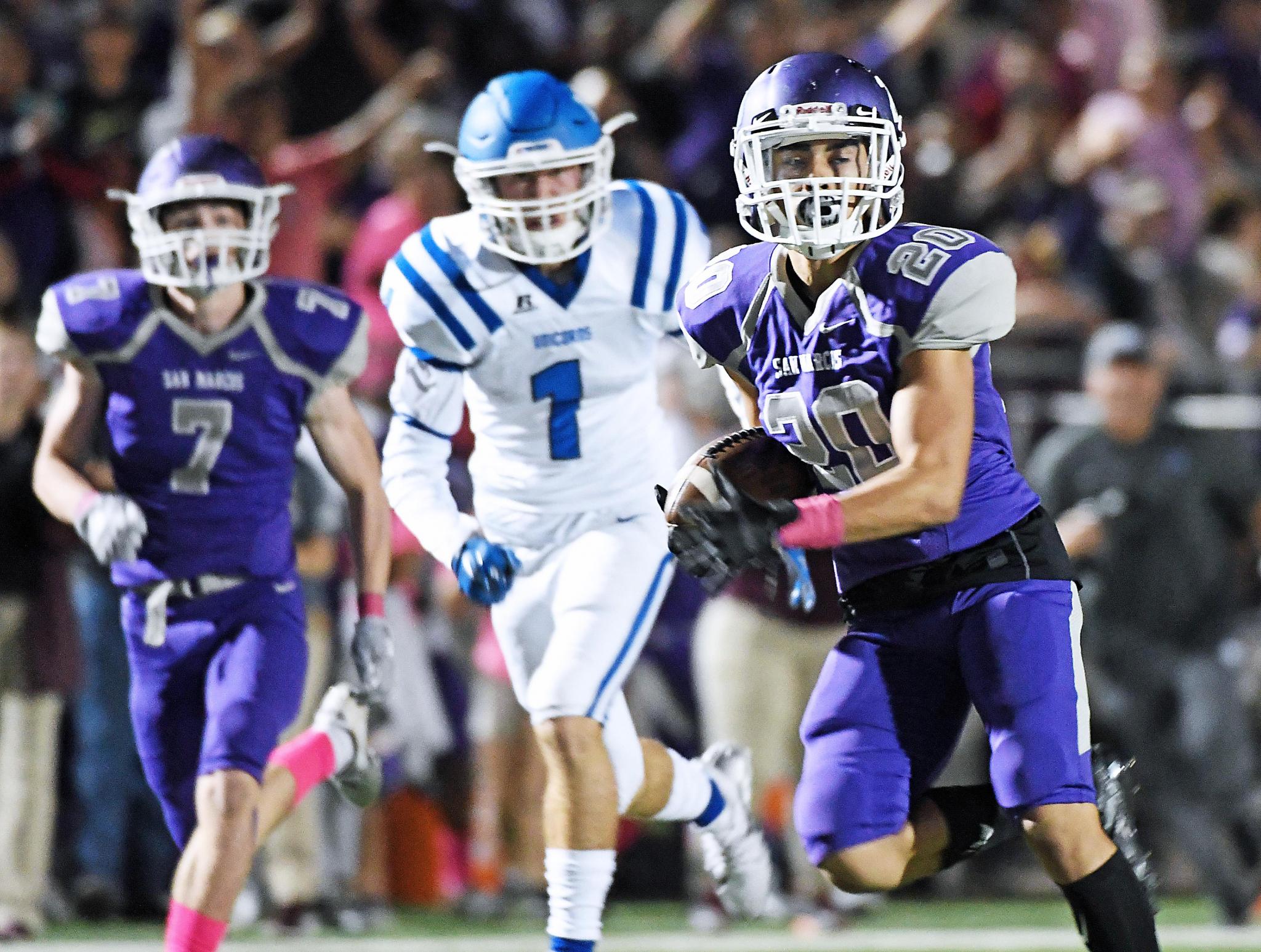 New Braunfels sophomore quarterback Peyton Driggers set up for a simple wide receiver screen. But Santana evaded a block and slipped in to intercept the pass.

The senior cornerback took the turnover back 32 yards for a pick-six.

San Marcos had the momentum and the lead at 10-7 midway through the first quarter.

“It was a dirty game, both sides of the ball had a lot of penalties,” head coach Mark Soto said. “We thought we cleaned them up in the second half, which is good.”

San Marcos started the game well. The Rattlers forced a fumble on the first play of the game. They turned that into three points with a 22-yard field goal by senior kicker Frankie Menchaca

New Braunfels answered with a six-play, 71-yard drive capped off by a 23-yard scoring scamper by Driggers to give the Unicorns their first lead of the night at 7-3.

New Braunfels responded with a 22-yard touchdown pass to senior wide receiver Marcos Franjul to regain the lead at 14-10.

An interception gave the Unicorns prime field position to start the second quarter. But again, San Marcos’ defense made a big play. The Rattlers forced its second fumble of the night, which was recovered by sophomore safety Kannon Webb.

But the Rattlers couldn’t take advantage of the turnover.

“You’ve got to make points off those turnovers,” Soto said. “We didn’t make points.”

After New Braunfels drove deep into San Marcos territory, the Rattler defense stiffened and didn’t allow the Unicorns to add a touchdown. New Braunfels was forced to settle for a 22-yard field goal by junior wide receiver/kicker Chase Mercer to give the Unicorns a 17-10 advantage.

New Braunfels added a 6-yard touchdown run by Driggers and a 1-yard scoring rush by senior running back Piale Thomas to take a 31-10 lead into the half.

San Marcos inserted junior safety Trey Lewis at running back late in the fourth quarter. Lewis capitalized on his touches in the backfield with a 81-yard touchdown run to cut the deficit to 45-17.

The Rattlers look to bounce back from Friday’s loss when they travel to take on Smithson Valley on Nov. 2 at Ranger Stadium in Spring Branch.