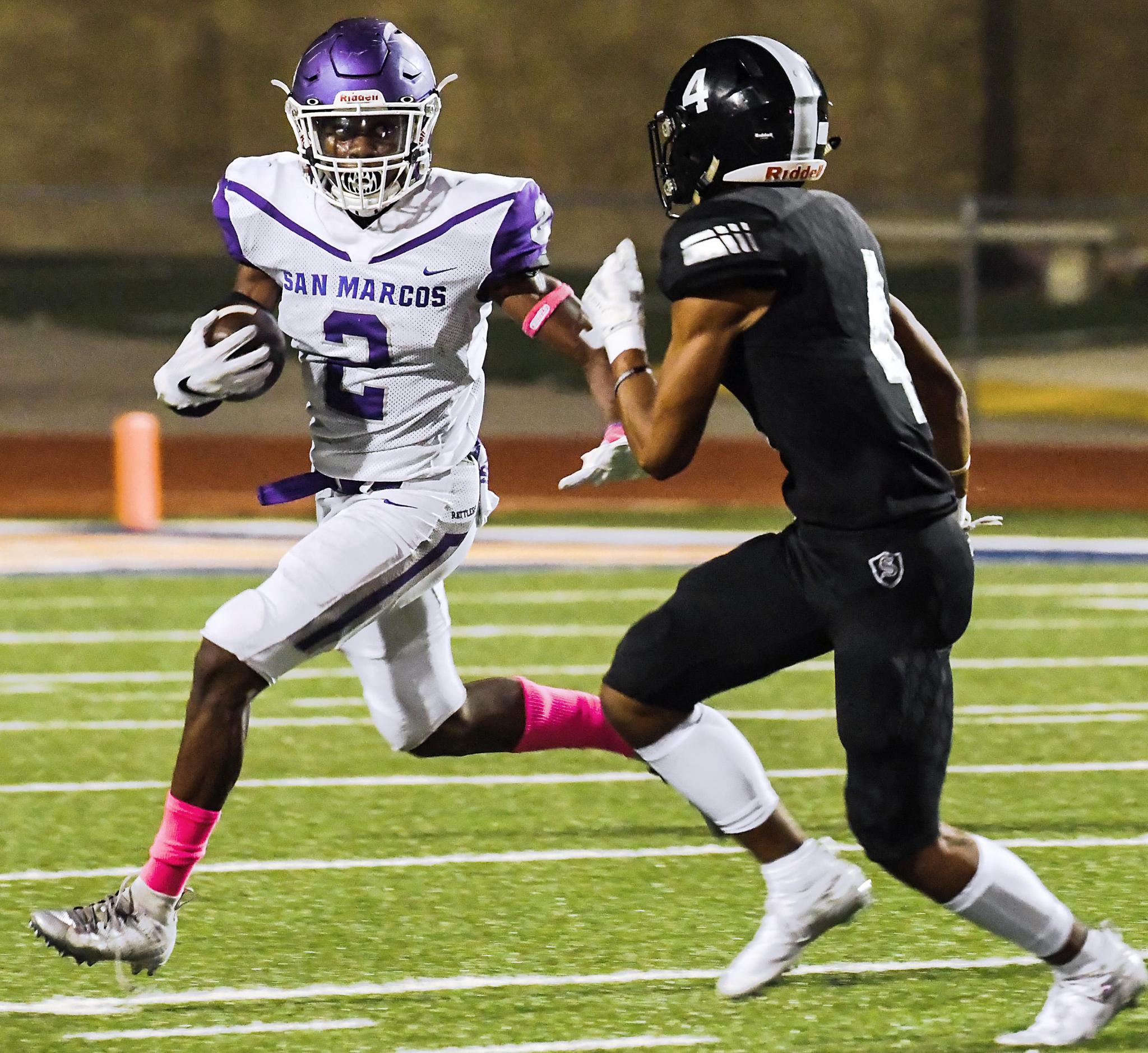 San Marcos was frenetic on Friday, buzzing with pent up aggression that built over the past two weeks, and it showed in the early going. The team played sharp.

Cibolo Steele was sharper in the end and the Knights finished with the victory, defeating the Rattlers 45-10 at Lehnhoff Stadium.

“I saw some Rattlers that answered the call,” head coach Mark Soto said. “They fought all night long. (We’ve) just got to get better in the late rounds, we’ve got to sustain our energy level from the beginning of the game through the game.”

San Marcos began the game with arguably its best opening drive of the season. The team picked up 10 yards and a first down on its first three plays, then came up a few inches short on a third down screen pass from junior quarterback Alex Garcia to senior running back Jamon Johnson that went for six yards.

On 4th and 1 from the Rattler 40-yard line, Soto sent out his punt team, as did Steele. But instead of giving the Knights possession, Johnson received a direct snap and plowed up the field for four yards, earning a new set of downs.

Soto kept the direct snaps coming for Johnson, moving the senior to quarterback on the next four plays in a wildcat formation with junior Takai Madgett slotted as the running back and Garcia split out wide. Johnson and Madgett took two carries each for 46 yards, including a 32-yarder by the former.

After reaching the red zone, Soto went back to a traditional formation, but kept feeding Johnson the football. The running back cleaned his plate and punched into the endzone from two yards out, leading to a 7-0 Rattler lead. It was the first time San Marcos held a lead in the first half this season.

“Jamon’s been playing good for us all year,” Soto said. “He’s the catalyst for us. I just love to watch him play. I think some other guys like Takai Madgett matched his intensity level running the ball, which was great to see. Even Alex (Garcia), when he had his chance to run, he put his shoulder pads down and ran as hard as he could, too.”

Johnson and Madgett provided a stable 1-2 punch on the ground. But the Knights had a counter for every combination thrown their way. For every jab and cross, Steele had a hook and uppercut — or in this case, a hook and ladder.

Up 24-10 just before the end of the second quarter on the 46-yard line, sophomore quarterback Wyatt Begeal found senior wide receiver Tyrin Smith, who lateralled the ball to Robert Collins. The senior running back zoomed past the Rattler defense for a 54-yard touchdown.

Collins scored again on the first drive of the second half with a 52-yard run, pushing the Knights ahead by 28 points and spoiling any chance of a San Marcos comeback.

“I think our defense gang tackled early,” Soto said. “I wish we could have continued to do that, but we got a little bit worn out.”

Though San Marcos didn’t pull out the win, the Rattlers proved they have the skill and talent to compete with any team in its new district. The team’s next task is doing it for four quarters.