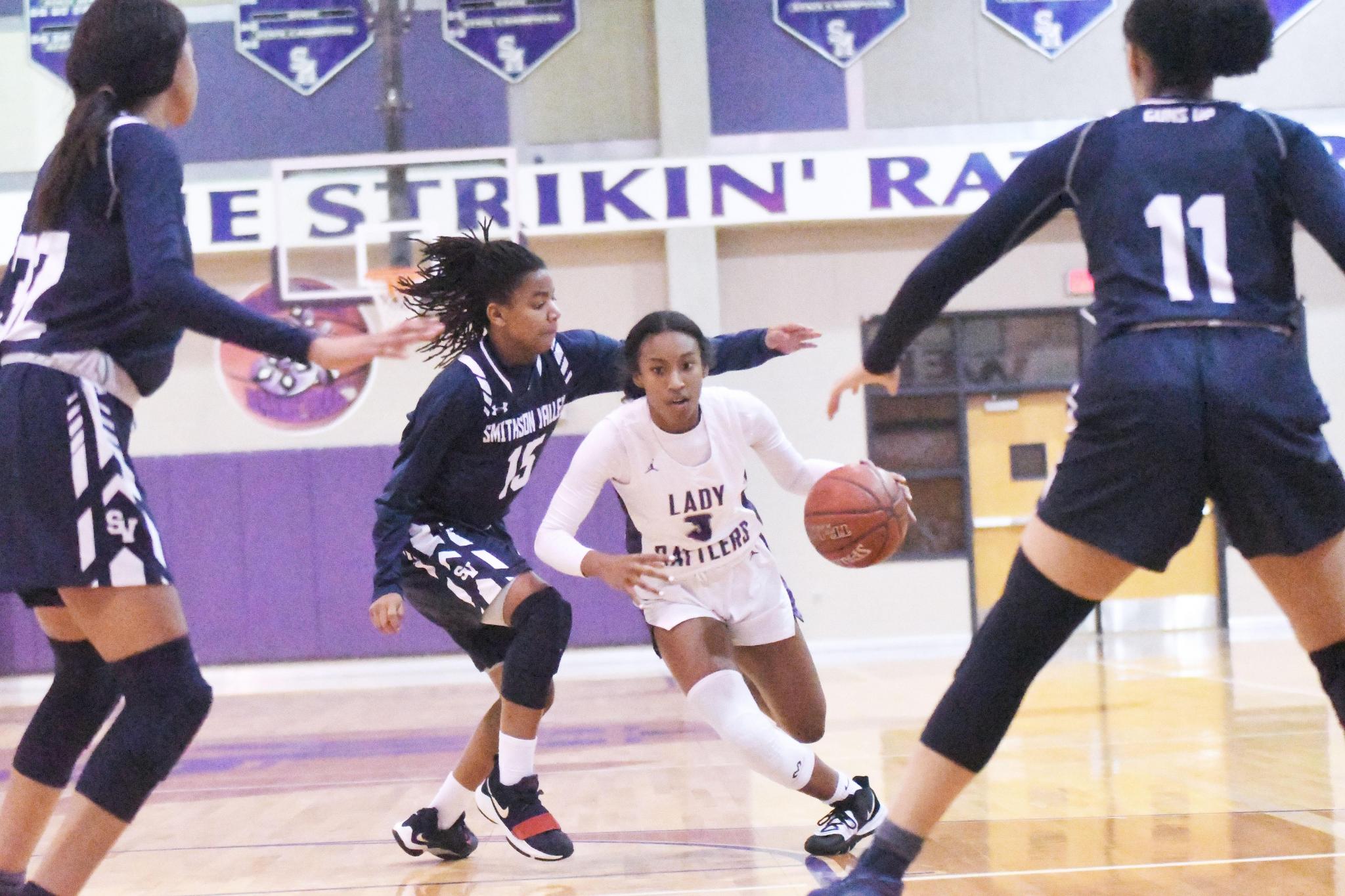 It took too long for the Lady Rattlers to get going.

No. 24 San Marcos hosted Smithson Valley inside the Snake Pit on Tuesday in the District 26-6A opener. The hosts ran a 2-3 zone defense throughout the game; the visitors preferred to play man-to-man.

The Lady Rangers were the first to break through on offense, surging to a 15-0 run to begin the third quarter, and pulled away with a 56-36 win.

“I guess it's a little disappointing. I don't know, just the lack of us offensive execution had me concerned early,” head coach Veronda Kendall said. “I think that when it didn't come so easy, we got a little antsy. And I don't know, maybe we went away from some of the things that we do consistently. But we had a tough time scoring.”

Smithson Valley (11-3, 1-0 district) opened the game with a 3-pointer from the left corner. Neither team scored again until the 4:57 mark of the first quarter, when senior center Grace Latham sank a free throw to get San Marcos (16-4, 0-1) on the board. The points continued to come infrequently. Sophomore guard Angelina Sotelo ended the period with a layup from the left side to give the Lady Rattlers a 6-5 lead.

Both defenses eased up a bit in the second quarter as the Lady Rangers pulled back ahead, 20-17.

“We expected the man-to-man. I think maybe they were a little more physical than we expected,” Kendall said. “That's where that being a lot more patient comes in. A lot more patience, setting hard screens, cutting hard off those screens, you know, those are areas we've got to sharpen.”

Junior forward Faith Phillips had dropped in a layup off a screen from Latham with 52 seconds left in the second quarter, but the team wouldn’t score again until 3:42 remained in the third. Smithson Valley found the seems in San Marcos’ zone and started dumping the ball to its posts, often leading to a bucket or a pair of free throws.

By the time junior guard Kayla Presley ended the cold spell with an and-one layup and free throw, the purple and white trailed 35-20. Presley continued attacking the rim, scoring the hosts’ next seven points, all on and-one layups, but the Lady Rattlers never recovered, resulting in a 56-36 loss.

“We looked at some defensive changes (in the second half). We looked at some ways to try to put people in positions where they could score the basketball,” Kendall said. “And I just think that was an area where we were not sharp tonight.”

Presley led the team with 17 points, followed by Phillips with seven. The 20-point margin is the biggest of any loss for San Marcos this season.

Still, Kendall is confident her players will bounce back. The team dropped its district opener to Smithson Valley by 22 points last season on Dec. 11, 2018, and responded with back-to-back wins over New Braunfels Canyon and San Antonio East Central.

“We gotta compete and we gotta show up to play,” Kendall said. “I don't think there's a whole lot of complete revamping we need to do. It's just being prepared to — you know, knowing that these games count — being prepared to step on the court and compete. And I mean from the first quarter to the last. So that type of mental preparation, knowing what's at stake, is really important these district games.”