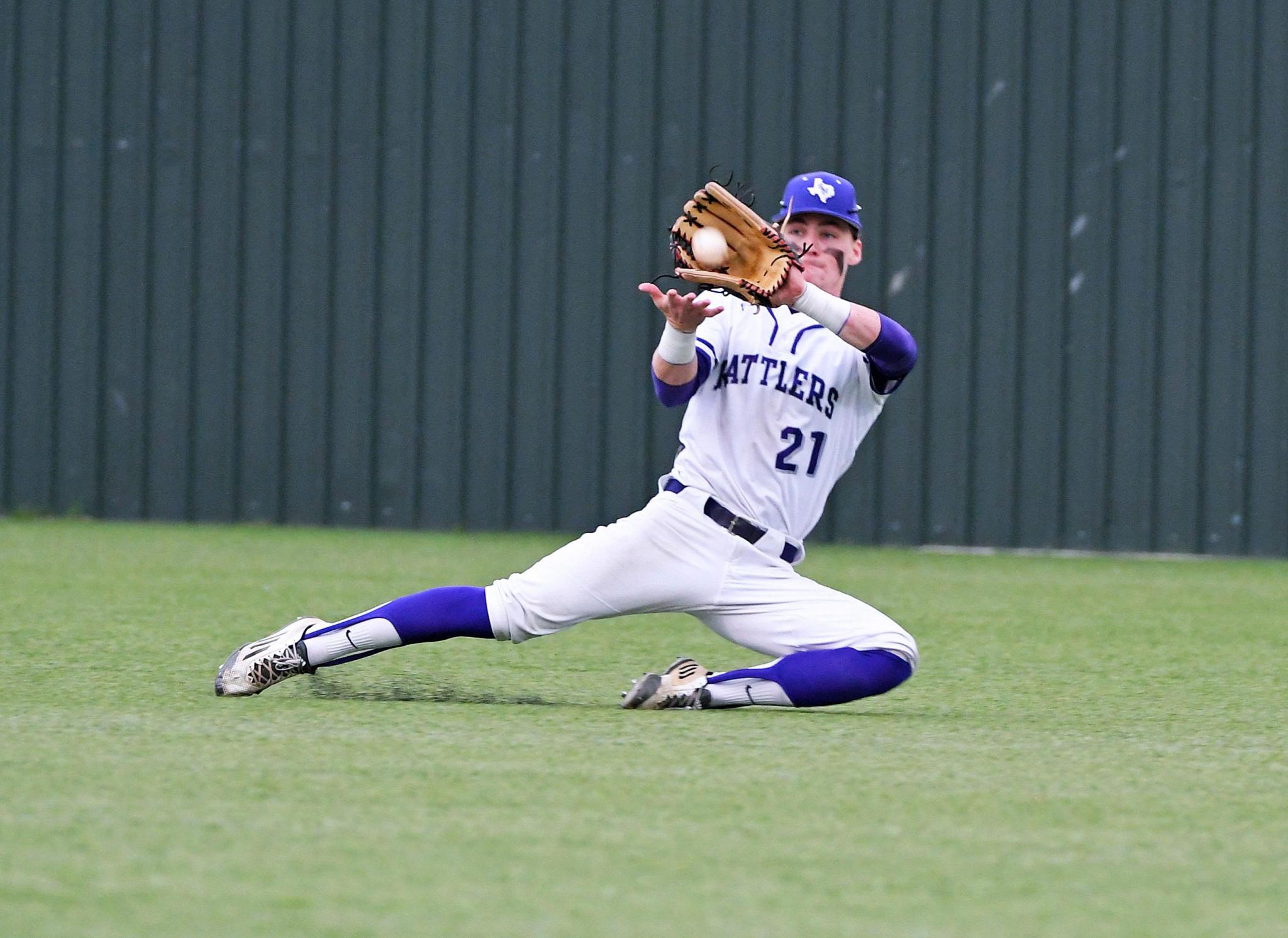 San Marcos tested itself in a 3-0 loss to Texas’ top dog, No. 1 Lake Travis, on Tuesday night and although the team lost, the players passed head coach Bryan Webb’s test.

Webb rarely gives his team days off. Directly after most games, you catch the team right back in the weight room working on power and strength. During the offseason, they flipped tires, ran, outworked teams and overcame a brutal pre-district schedule against multiple state-ranked opponents. All of it was Webb prepping his team for a district sure to test them. Instead, the Rattlers tested the Cavaliers in a low-scoring pitching battle.

“Like I told them, ‘Any let down for games are on you, ‘cause now you’ve played the top quality, the best of the best in the state of Texas and you know where you’re at,’” Webb said. “This was a test to see really where we were and if our schedule was legit. It proved it was and I’m proud of the way they came out here and battled those guys. That’s a very talented Lake Travis team.”

The Rattlers (12-3-2, 0-2 district) mirrored Lake Travis’ defense by making plays in the field to keep the visitors from gaining any momentum. The Cavaliers (17-2-2, 2-0) were in prime position to turn a scoreless game around. Two singles and a walk by the Cavs loaded the bases with two outs. Kaden Kent stood at the plate and hit a shot to right center, forcing senior centerfielder Kannon Webb to make an impressive snag diving on the grass. The catch saved three runs from coming in.

On the other hand, pitching for the black and red stood out. In the first inning, senior catcher Selvin Anderson hit a ground ball to third base and an overthrown ball to first gave San Marcos its lone runner of the game. Even though senior pitcher Ethan Roark took a couple of at bats to find his groove, his defense backed him up. But once he did, he never slowed down. By the bottom of the third the TCU commit was dealing a variety of pitches, including what seemed to be his go-to — a breaking ball. The superb pitching caught all three of San Marcos’ batters on strikeouts looking.

“He found his groove. In a ballgame like this, you gotta exploit the opportunity when you get it. We had a chance there in the first and we didn’t take advantage of it,” Bryan Webb said. “He got a little bit of confidence. We hit him hard last night. We tried to get him out by taking some pitches and doing some stuff, but he wasn’t afraid. He built confidence and he was pretty dominant tonight, there’s a reason he’s going to TCU so he did a good job that kid pitched lights out, kudos to him.”

By this time, San Marcos pitcher Tito Santos continued to force his opponents into fly outs, holding the best team in Texas scoreless through four. Lake Travis eventually started to catch up to Santos’ arm. Their leadoff hitter started the fifth inning with a triple, then a single and a double brought in two runs with ease. Santos kept his composure, striking out the last batter of the inning but enough damage had been done. Roark again returned to the field to add to his strikeout total with three more.

Sophomore pitcher Dallas Calderon took his chances on the mound for San Marcos, picking up two strikeouts in only an inning of work. Lake Travis would score one more time on a single in the final frame. Bryan Webb said after the game that he felt like his team was doing some uncharacteristic things at the plate, which Roark was able to take advantage of. He followed that up by telling his young team that “you just can’t do that against good pitchers in tough games.”

Webb and his team won’t have too much time to rest as they travel to Smithson Valley (12-1, 1-0) on Thursday in a rematch of the Feb. 26 meeting between the Rattlers and Rangers. First pitch is set for 7 p.m.

“We’re gonna have to let this one go, do the best we can. We got Westlake here on Tuesday and we gotta protect this house as best we can and Smithson Valley is a good team to keep us loose and keep us in game form and not just take five or six days off,” Webb said. “Baseball is a game of repetition and routine, so I told them I’d give them a couple of days off, but that’s about all they’re gonna get.”