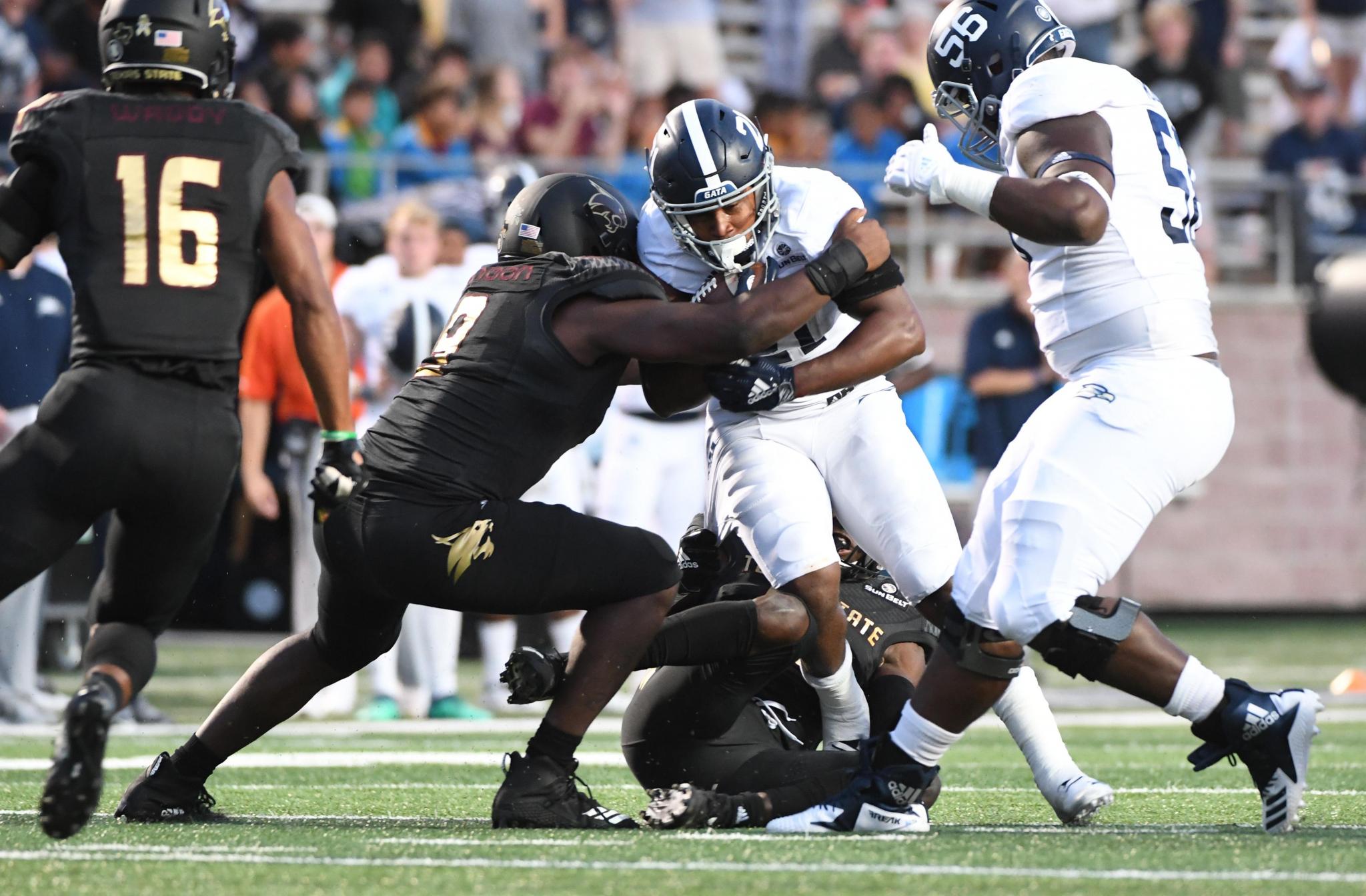 And the Bobcats suffered another setback, this time with a 15-13 loss to Georgia Southern. Texas State fought to the bitter end after falling behind 15-0 and rallying to within a two-point conversion from tying the game late in the fourth quarter.

But Texas State’s defense held firm throughout the game. The Bobcats’ limited the Eagles triple-option attack, which came into the game ranked No. 7 in the country in rushing yards per game, to 164 yards on 52 carries.

But Texas State’s offense struggled for most of the game. After the Bobcats drove 59 yards down the field on 15 plays on their opening possession  but failed to score on 4th and Goal from six-inches away from the endzone, they were held to 44 yards in the half.

Texas State saw itself down 10-0 at halftime and was held scoreless in the first half for the third time this season.

The Bobcats inserted sophomore quarterback Willie Jones III early in the third quarter looking for a spark after freshman Tyler Vitt struggled. But on his second possession, Jones was sacked in the endzone for a safety.

But Texas State found the spark it was looking for on the ensuing possession in the form of graduate senior tight end Keenen Brown.
Brown took a jet sweep 61-yards and was pushed out of bounds just four yards from scoring. “I wanted to get in (the endzone) bad. I got a little tired at the end though,” he said.

Brown eventually scored two plays later on a 3-yard run to cut the Eagle advantage down to 15-7.

Both defenses kept each other in check until Texas State provided a much-needed stop on 3rd and 3 with under five minutes remaining in the game. Junior safety JaShon Waddy credited the scout team offense for helping it prepare during the week so it could make important plays throughout the game.

“I think this week we obviously knew what time of game it would be,” junior safety JaShon Waddy said. “Then from the scout team, like Keenen (Brown) said, LD Harris gave a perfect look for us. It was really game-speed reps all week. So, I feel like that helped us.”

The Bobcats utilized both Vitt and Jones on their final offensive possession. Jones began the drive with a 16-yard scamper followed by a 10-yard run by Vitt on the next play. After a defensive pass interference call extended Texas State’s drive, Vitt connected with sophomore wide receiver Jeremiah Haydel for a 29-yard touchdown to bring the Bobcats to within 15-13.

But Texas State couldn’t convert the two-point conversion to even the score, and couldn’t recover an onside kick to keep the comeback bid alive.

Withers called Thursday’s loss as frustrating of a loss as one during his first season with the Bobcats.

“The hardest thing about when you take something over that, you blow up and start over, is when do you get over the hump? And that’s kind of where we are right now,” Withers said. “We’re kind of stuck trying to get over that hump. I think it’s coming soon. I hope next week.”

But until then, life is still not fun for Texas State.