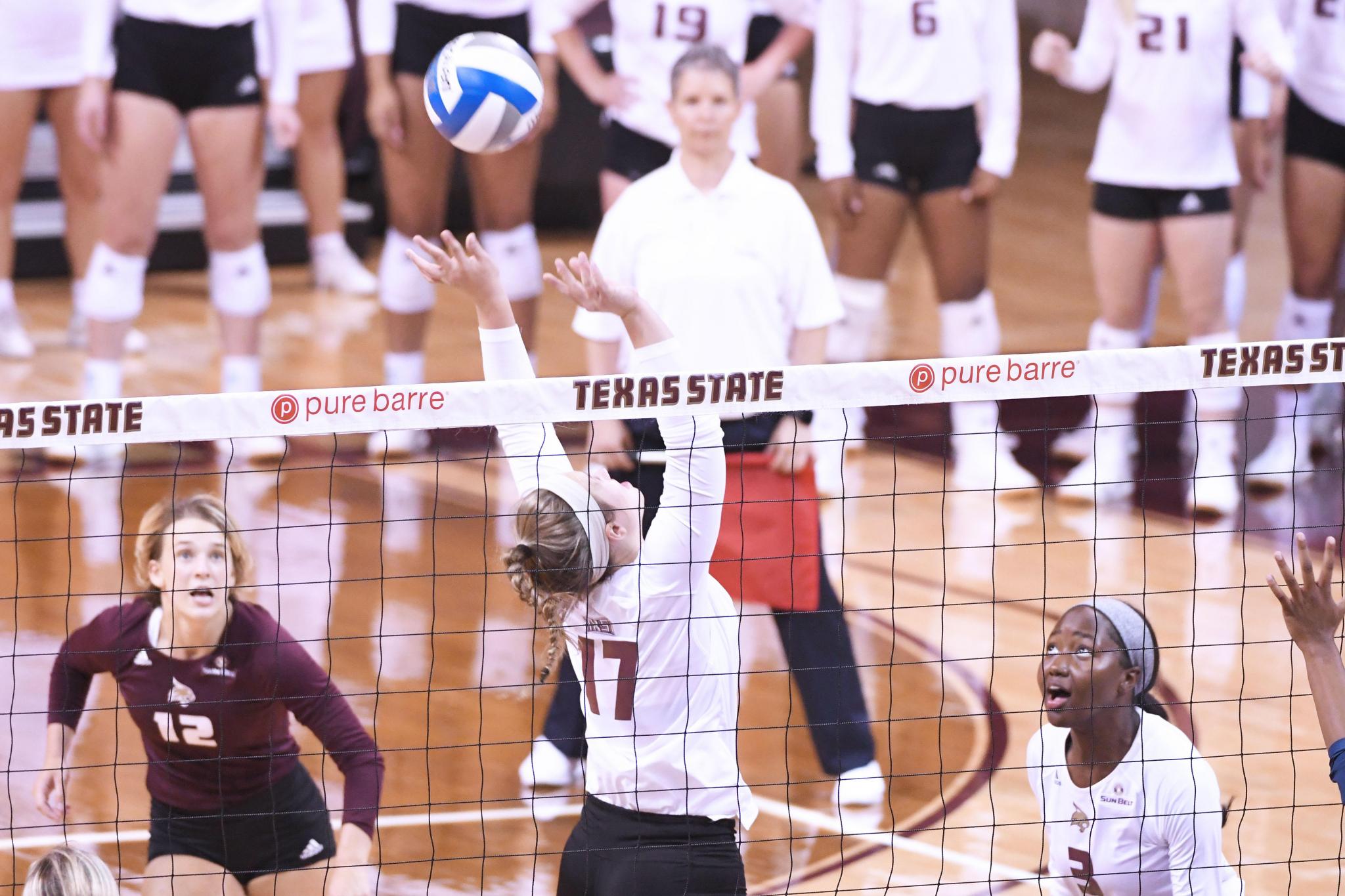 She’s not able to bring all of them when Texas State (7-5) travels for away games, though. The decision of who stays and who goes for each trip can be difficult. To get a better picture of who her best options are, Chisum chose to give each defender extended playing time against George Washington (6-6) during the Bobcats’ second game of the Creeds & Crests Classic inside Strahan Arena on Friday.

Texas State typically deploys a lineup of three or four outside hitters and middle blockers, with setters and defensive specialists filling in the rest of the spots. But on Friday, the ratio was flipped.

Chisum continued to rotate the bantam brigade in throughout the match, mixing in sophomore defensive specialists Kayla Granado and Kaylie Koenen as well. Texas State went on to sweep the Colonials, 3-0 (25-13, 25-17, 25-12) in front of a crowd of 1,552.

“I'm trying to get them all playing time so that when we travel, I've got concrete, objective numbers on them to see who's passing the best, who's digging the best,” Chisum said. “Because I can't take all five of them. But all five of them, really, they're good. And again, this type of match gives kids opportunities when they don't have some.”

The Bobcats’ strategy sharpened the team’s passing, which consistently kept the visitors out of system play. Even when the Colonials did manage to fire a shot in system, a Texas State defensive specialist was usually there to dig it out.

The hosts also benefited from pinpoint serving across the board. Six different players scored an ace during the match. DeWalt was particularly precise, leading the way with three.

A 5-0 serving run from DeWalt resulted in the Bobcats establishing a double-digit lead, 21-11. The sophomore topped herself later in the match, tearing off a 12-0 serving run in the third frame that sealed George Washington’s fate.

“The ball's floating really, really well,” Chisum said. “If you can keep Emily serving like that, you know you're in good shape. And she's our first server, so if we pass first, we back it up on rotation so she serves first. But her ball was moving very, very well tonight.”

Johnson couldn’t think of any areas the maroon and gold needed to improve on after the sweep. No matter what lineup Chisum rolls with, the Bobcats just need to keep competing.

“I'm excited to play Sam Houston (State),” Johnson said. “They're a very intense team, well-coached team. I know they're going to come out and want to play and want to beat us ... I'm just ready to get the crowd in here and play like we did tonight because that was really exciting to see.”