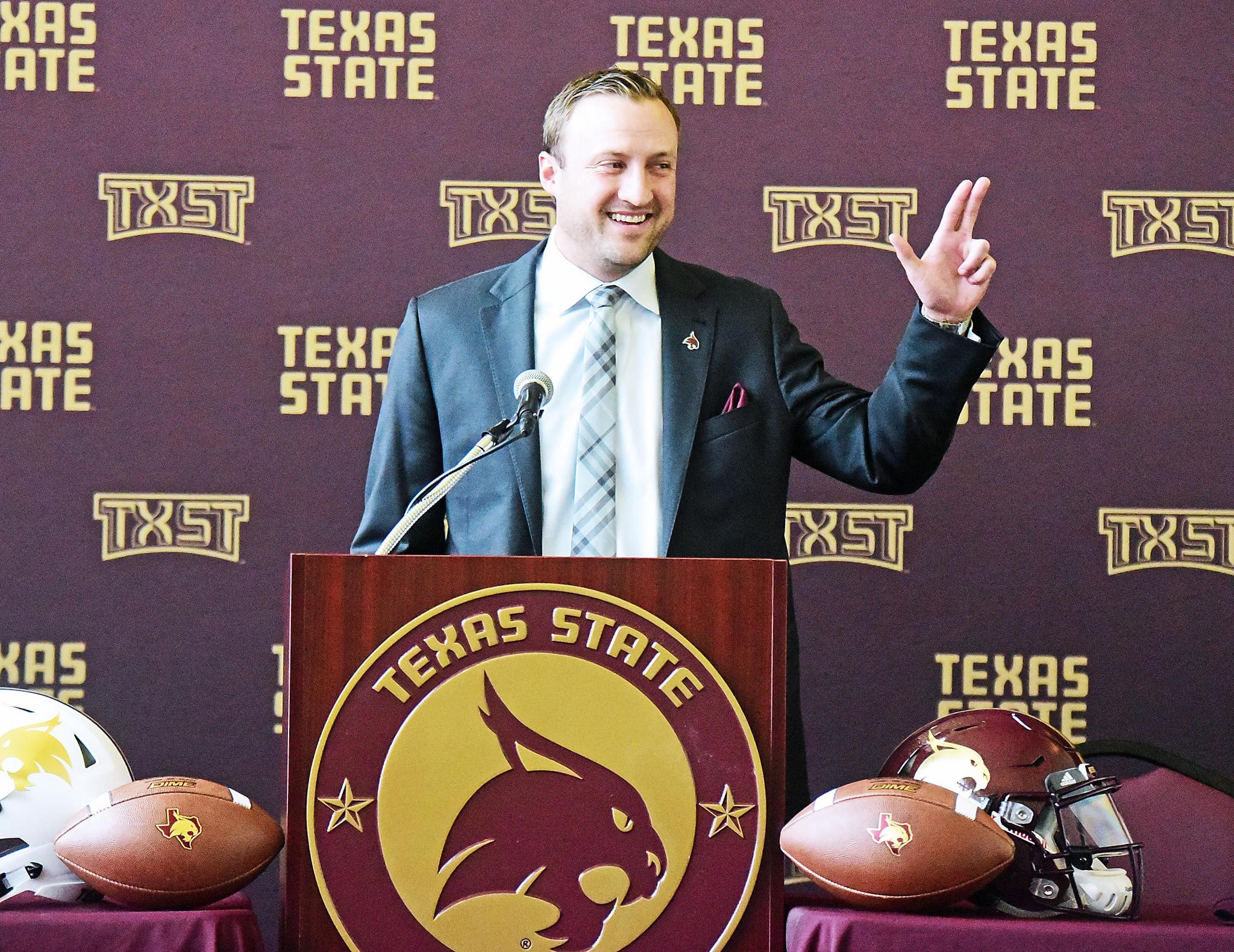 Jake Spavital always had his eye on Texas State.

The 33-year old has recruited Central Texas and knew the Bobcats had potential. So, when he was interviewing for Texas State’s head coaching vacancy, he wanted to see the football facilities as soon as he arrived in San Marcos.

He was impressed with what he saw. Three days later, Spavital was introduced as Texas State’s 20th head coach in front of a packed audience inside the J. Garland Warren Room in the Bobcats’ Endzone Complex on Friday.

“When you’re at Texas A&M and you recruit the state of Texas, you see the potential in San Marcos,” Spavital said. “You see the potential of Texas State. And again, it goes back to the hustle of what this University is about. The jumps that this place has made is pretty phenomenal in such a short time.

“You know, you look out over here, some of this facility that we’re standing at right now we don’t have at West Virginia. They’re upping things. They’re trying to make this a better place and that’s why I wanted to see the facilities and the commitment to the coaches, commitment to facilities and it’s all there and that’s why I wanted to come to Texas State.”

Bobcat athletics announced Spavital’s hiring on Wednesday. He’ll be the second-youngest FBS head coach only behind Kent State’s Sean Lewis. Spavital will receive a five-year contract with a base salary of $800,000, athletic director Larry Teis confirmed on Friday.

Teis said Spavital was Texas State’s No. 1 choice. Teis wasn’t necessarily looking for an offensive-minded coach, but the Bobcats’ new head coach will be tasked with fixing an offense that struggled constantly under former head coach Everett Withers. In 2018, the Bobcats only scored 19.8 points per game, averaged 182.2 passing yards per game and 148.1 rushing yards per game.

“I mean, if the right person, defensive (coach) would’ve come through, yes, but we were losing games without scoring a lot of points,” Teis said. “Our defense was kind of fixed for a while then we were going back and we just needed some offense.”

Spavital made his expectations clear for the program — Texas State is going to win.

University president Denise Trauth is confident Spavital will deliver on his promises.

“This is a huge hire for Texas State because we have been systematically moving our University up to the next level piece by piece by piece,” Trauth said. “And this has been going on for 20 years, whether you’re talking about adding doctoral programs, adding research, putting in the research park, building like Ingram Hall. We’ve been moving the University up and we moved the athletic department up to FBS several years ago … We need to move football up to the same level that STAR Park is at, that the PhD and computer science is at. We need to move football up, so this is a huge hire.”

With his new job at hand, Spavital is ready to get started. He promised his new players that he’ll bring in a staff that will care for them and coach them. But he made it understood, Texas State will only win if everyone is headed in the same direction.