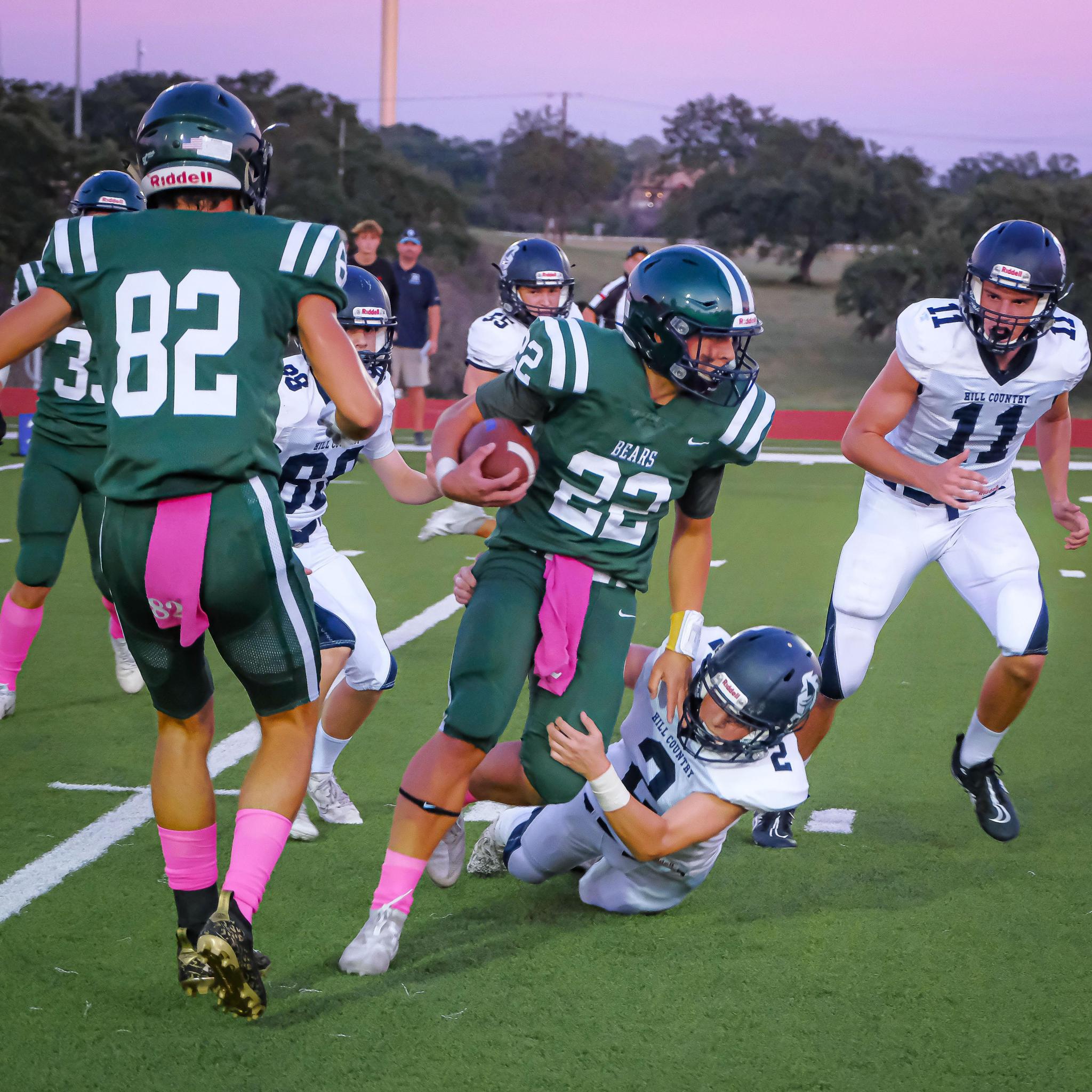 By the San Marcos Academy Bears’ usual home standards, they started slow. The beginning of the game at McCoy-Remme Athletic Complex on Friday featured the Academy and the visiting Austin Hill Country Christian School Knights trading touchdowns twice. However, a blocked two-point kick by the Knights after the first Bears score gave Hill Country a 16-14 edge.

Junior Cole Krackau provided a jolt from the sideline with encouragement for the defense, carried his enthusiasm to the offensive huddle, and carried the ball into the end zone on the next two possessions. The Bears led 30-16 in the second quarter. The storyline for the rest of the night was sniffing out the ball, and snuffing out the Hill Country offense. Whether the Bears were marching to the end zone, or keeping the Knights out of it, they rallied to the football and won 82-32.

Both Krackau and senior Mason Loep described a team emphasis on a ball hawk mentality.

“We practiced going one-on-one (this week) on the goal line because we knew that’s what they were going to do (with isolation matchups),” Mason explained. Ultimately the goal was to, “get up there and get it out of (the receiver’s) hands.”

In addition to a towering pass break up in a goal line stand, Leop tallied three tackles and a touchdown.

The Bears rode their second quarter surge, and 38-24 halftime lead, into the second half. The defense produced a turnover on downs on the Knights’ (3-3) first drive. The ensuing SMA drive capitalized on the excellent field position. Senior Wilson Gunther was called upon to hammer home the short yardage touchdown on third down. Hammer time was also how the game concluded. Gunther punched the ball in the end zone with 1:19 remaining in the fourth quarter.

The Bears had a touchdown denial on defense before Gunther scored to end the game. The stand displayed, “determination and will,” in the eyes of head coach Chris Chacon.

“Being able to finish out a drive that way, take possession of the ball, and finish the game there, clinch the 45 point win (is) a big morale booster for the team,” Chacon said.

The chasm in the score was opened by the Bear defense, who was responsible for as many points as the Knights offense in the second half. Midway through the third quarter, Chizi Efobi bull rushed the middle and caused a panicked throw. The errant pass went towards No. 6, Cole Krackau. He plucked the ball from the air, and Efobi and C.J. Crauthers paved the way for him to complete the pick-six. Efobi pressured the Knights’ passing attack vociferously and finished with 10 tackles, a forced fumble, and a touchdown. Crauthers made his presence on defense known with a forced fumble of his own.

Bears coaches were complimentary of blocking down field to open holes for high-yardage plays. Krackau, who finished the game with four touchdowns, agreed and added “It was blocking all night. This was the best blocking ... all year. My guys blocked amazing for me. It was pretty easy to see where my guy’s butts are and (run) right behind them.”

Homecoming, a special 6 p.m. Saturday night showcase, is next for San Marcos Academy (5-2) against Round Rock Christian Academy (2-3).