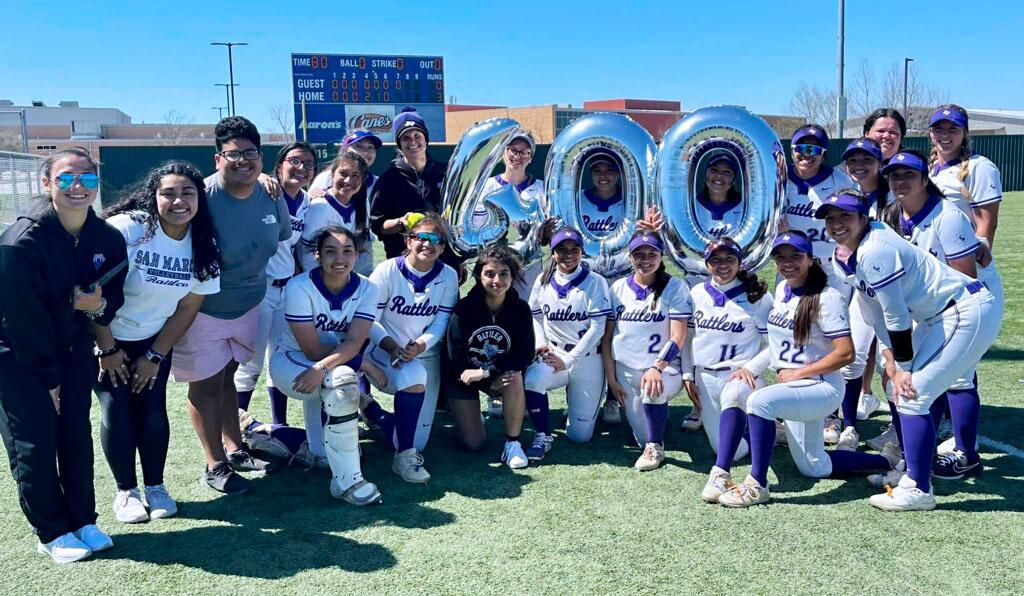 Cathy Stoughton earned one of the biggest achievements of her career last Tuesday.

She didn’t tell any of her players — or many of their parents — about it. The Lady Rattlers were hosting Austin High and in need of a win to stay in the playoff hunt. Stoughton didn’t want to add any pressure on their shoulders or cause any distractions.

San Marcos executed well. Junior pitcher Kayli Saenz pitched a complete-game shutout, giving up just three hits, no walks and no runs while striking out three. Junior outfielder CJ Castilla went 3-3 at the plate, crossing home once, and helped the purple and white to a 3-0 win, moving the team to 8-11 overall and 2-2 in District 26-6A play.

After the game, the Lady Rattlers broke out balloons to celebrate their head coach. It was the 400th victory of Stoughton’s career.

“I think after the game, we closed up and we were finishing up locking up the field and everything and I just kind of sat in the dugout and I told my assistants, I said, ‘It’s starting to kind of sink in. It kind of reminds me of how long I’ve been doing this and how successful we’ve been as a program over the time that I’ve been here,” Stoughton said.

“And you know, we’ve had a lot of great athletes come through here that make the program and I owe a lot of credit to them. But it’s special to sit there and think about how long you’ve been doing something. I think the 400 really hit that this is this has been my life for so long.”

Stoughton’s become synonymous with San Marcos Softball. Her family is made up of SMCISD alumni, including her grandfather, a class of 1932 graduate. Stoughton was a member of the Lady Rattler softball team the first year the program began in 1990. She also played for the volleyball and basketball teams and performed with the Rattler Band as a trumpet player. After graduating from SMHS in 1993, she attended Texas Lutheran University and later returned to her alma mater to coach the team she helped found.

Her first win as a head softball coach came in 2002 against Kerrville Tivy. After the game, Stoughton’s father told her to hold up a ball and stand in front of the scoreboard for a picture. Stoughton said she still has the photo.

The head coach can recall many of the 400 wins under her belt. Later in the 2002 season, her team went up against Del Valle. One of Stoughton’s best players, Jennifer Crayton, launched a home run over the outfield fence, helping them build a big lead. Late in the game, Crayton, a left-handed hitter, asked Stoughton if she could switch hit just for fun. Stoughton agreed.

“So I turned her around and two pitchers into at-bat she hits it over the left field fence,” Stoughton said. “And I felt bad because I never run up the score on anybody and I went and apologized to the coach. I said, ‘I swear I had no idea.’

“I still have not seen (someone hit home runs batting left and right in softball) since then. I don’t know if I’ll ever see that again. But that was one of the coolest things I’ve ever seen.”

In 2013, the team began district play with a 2-4 record but managed to bounce back in the second district cycle to make playoffs. San Marcos advanced past the bi-district round, matching up with San Antonio O’Connor in the next.

“O’Connor had a 26-game winning streak and they were on a roll,” Stoughton said. “They beat us in the first game and I remember the score, I want to say maybe 8-5, something like that. They beat us in the first game. And then they had us down in the second game, 12-10, and a (future NCAA) Division I pitcher on the mound. And we were hitting her, they were hitting us. And we go into the bottom of the seventh inning and I had my No. 9 hitter up.”

The batter drew a walk and the top of the lineup swung for enough singles and doubles for the purple and white to rally for a 13-12 win.

On April 20, 2018, San Marcos won its last game of the season against Austin Bowie, 5-3, to tie Austin Akins for the District 14-6A title with an 8-2 league record. However, the district chair presented Akins with the league trophy that night.

“My girls were really, really upset (with the district officials),” Stoughton said. “They felt like they had earned a right to be presented with something that night and they saw it all over social media that the other team got it even though we had tied.”

The two sides had to face each other in a seeding game three days later. The Lady Rattlers run-ruled the Lady Eagles in five innings, 11-1.

“That was a fun game because my girls were just so dialed in,” Stoughton said. “That seeding game was a lot of fun just seeing how hungry they were. They wanted to send a message and so that was a fun game to be a part of.”

San Marcos hosted Del Valle on Tuesday, the game ending after press time. Stoughton’s excited to add a few more victories to her name this season.

“I’m blessed to get (400 wins) as a Rattler,” Stoughton said. “My whole family has grown up here and I know a lot of my colleagues don’t have the opportunities to coach at their alma mater. And I think it’s an honor to be here and it was a blessing to actually get it as a Rattler. That means more to me than so many things, that I’m actually able to be a part of my hometown and my community in the tradition of my family and my friends and still be in this community and still be able to work where I started.”