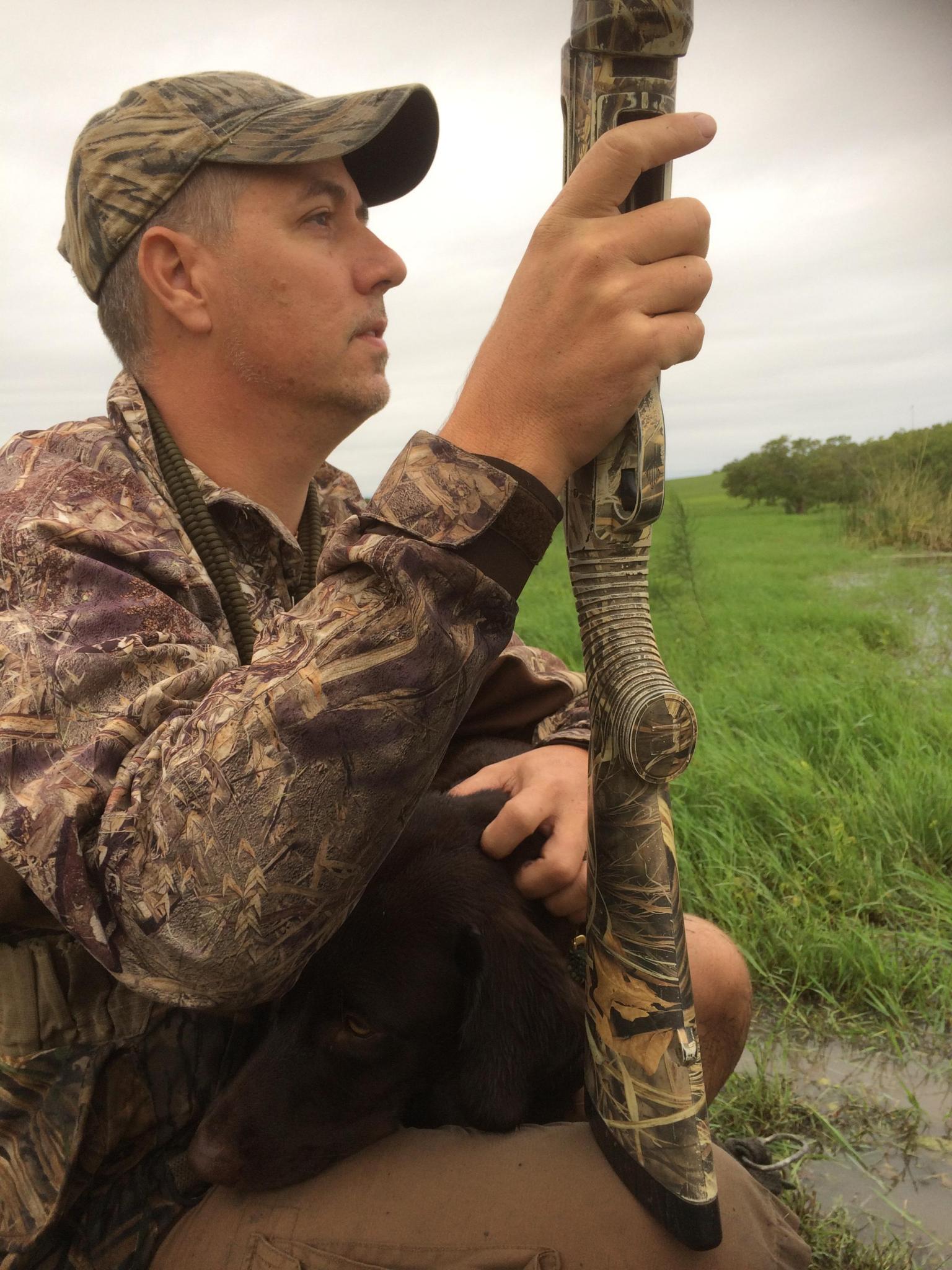 On a teal hunt with two good hunting dogs

The archery deer season opened Saturday in Texas. But for those of us who are primarily wing-shooters we have been shooting doves since Sept. 1. In the midst of the first month of dove season the early teal season opens for 16 days.

Teal, especially blue wings are early migrators. By the time the general duck season opens in November most of the blue-winged teal are in Mexico and Central America. The early September season gives us duck hunters a brief window of opportunity.

A friend of mine saw a couple of flocks of bluewings of the opening day of dove season. But teal are very fickle. When our rains began early in the month those teal went south.

My son, Tim, grandson, Timothy, and I tried to hunt the opening day of the teal season on September 15th. We couldn’t hunt – monsoon rains. But it didn’t matter. Most of the teal were gone and warm weather, without any cold fronts, was holding many birds up north.

Three factors influence duck migration. The length of days is a major factor.  Ducks seem to have a built in calendar. As the days get shorter they prepare to head south. Then a good cold front adds to their incentive to migrate. If a cold front coincides with a full moon, so much the better. They often fly at night when they have light.

On Sept. 27, our trio arrived at a private lake near Seguin before daylight. It wasn’t raining this time and a cold front was blowing 14 MPH out of the north. The big question – do we have any ducks?

After setting up a temporary blind and tossing a dozen teal decoys out front, we sat down with our two Labrador retrievers. I had my five-year-old Annie and Tim had his new chocolate lab, Winter, who was three days short of her first birthday and this was her first duck hunt.

About exactly at legal shooting time a flock of about 15 teal buzzed us from behind and landed far out on the lake. Soon they got up and flew over us like a formation of jets. Tim got off one shot and a bird folded. He loosed Winter to find the duck behind us in the grass. She found the bird, picked it up, and then dropped it. It was like she said, “What is this?”

Tim tossed the bird several times for her and she was soon bringing it to him.

The next 20 minutes the shooting got hot. Another group of about 15-20 teal came straight at us. We knew they were not going to actually come into the decoys because the wind was wrong. Ducks land into the wind but the north wind was in our faces. A good south wind would have brought them right into the decoys. So they blasted right over us. Teal are so fast. No wonder some guides on the rice prairies along the coast call them “rice rockets.”

Tim and Timothy were shooting 12 gauge pumps and I had my little 20 gauge semi-automatic. As the birds climbed, five died.

We loosed both Annie and Winter. They quickly brought all the birds to hand. Winter was really getting into it.

Soon another large group of blue wings came toward us but turned short of shotgun range. I called briefly and they circled back. This time they turned again, but closer. I called again and here they came.

“Get ready,” I whispered. “This time is the real deal.”

They cut right across in front of the decoys. Our shotguns began to blaze; it was like a shooting gallery.  Every time I pulled the trigger I saw a bird fall. When the shooting stopped seven birds were down. Several birds fell across a fence.  Annie found a hole in the fence and was gathering dead teal like a lady with a shopping cart. Tim took winter back into some high grass to look for a bird that he dropped far behind us.  She quickly smelled and retrieved the duck.

Then, as quickly as it all started, it was over.  It was only 7:30 a.m.  While we waited a few more minutes, hoping against hope for one more flight, a dove flew by very high. Tim snapped off a shot and the dove hit the water. Winter crossed through the hole in the fence, grabbed the floating dove and brought it to Tim’s hand. All the hard work done in the backyard with Winter was paying off.  She will become an awesome dog.

That was our only real hunt of the teal season but the regular season will open in less than six weeks. We’ll be ready. So will Annie and Winter.