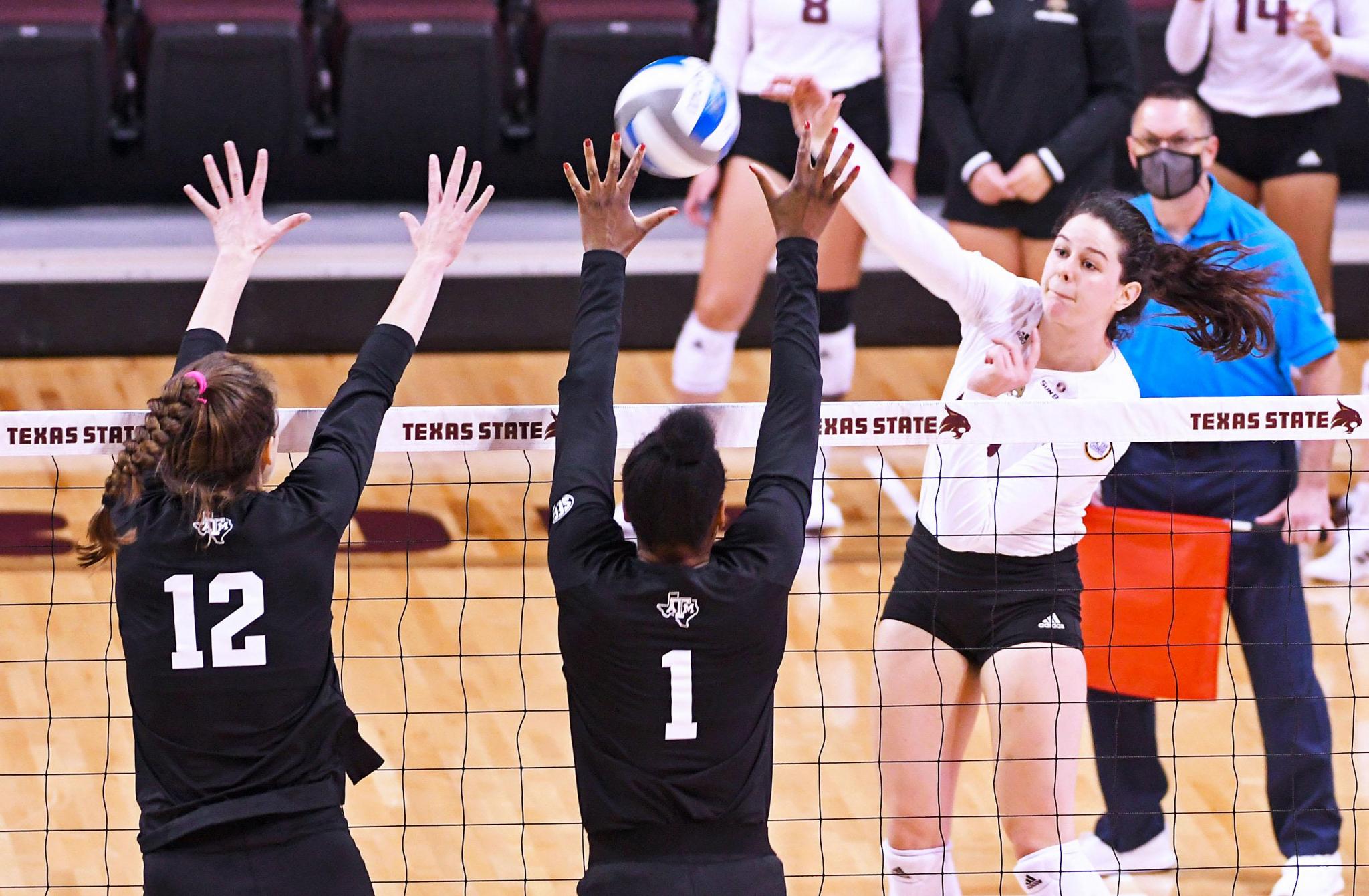 The Bobcats’ long, brutal non-conference season has come to an end.

Texas State had it rough throughout the opening month of its schedule, suffering through injuries and mental fatigue while playing some of the top teams in the nation.

“I mean, three-quarters of the teams we played are NCAA Tournament teams, from 2020 or 2019,” assistant coach Tori Plugge said. “So it really showed us what it's going to be like when we reach the end of the season. And we don't expect the girls to be their best when season starts, so we definitely have something to work towards come December. But none of it's gonna matter if we can't show up during conference play.”

Head coach Sean Huiet has said he’s been surprised by how much he’s had to talk to his senior-led team about the mental side of the game. He thought they’d be talking more about X’s and O’s.

But the Bobcats only had 121 days between the end of the 2020 season in the NCAA tournament on April 15 and their first scrimmage at Rice on Aug. 21. And as a team that’s won at least 70% of its matches in each of the past three years, this season’s .308 win percentage has taken its toll.

“That was the toughest part about the preseason, is explaining to them, you know, we may not go 14-0 during our preseason,” associate head coach Keith Anderson said. “But you know, we gotta battle. We gotta be battle-tested by the time we got to conference and get through it. And it was tough losing a lot for them and we were just reiterating, you know, this is for a purpose and we're going to be fine.”

It also didn’t help that three-time Sun Belt Setter of the Year Emily DeWalt was sidelined for most of the stretch with a shoulder injury. Texas State sophomore setter Ryann Torres was thrown into the fire and has filled in admirably, averaging 7.4 assists per set. But it has taken time to adjust, especially after Huiet switched his rotation from a 5-1 to a 6-2.

There are signs the gauntlet of a non-conference slate is paying off. The Bobcats faced three top-10 ranked teams and were only swept by one of them. They took wins over Rhode Island on Sept. 4 and Alabama on Sept. 10. And they also head into conference play on a two-game winning streak after defeating UTEP and Tarleton State over the weekend at the Islander Classic in Corpus Christi.

“It was definitely a big confidence booster,” senior outside hitter Janell Fitzgerald said. “We definitely were going through a little slump. Like, it was super awkward, everything was still changing. And we were trying to figure out where our flow lied. And I think that those two wins helped us overcome that.”

Texas State (4-9) travels to play Troy (7-4) on Friday at 6 p.m. and South Alabama (7-5) on Saturday at 6 p.m. The Bobcats will hope that the lessons learned during a dogged preseason will transfer over into Sun Belt play.

“I think we're finally kind of starting to put some permanent pieces together in the lineup,” Plugge said. “We've used a lot of players in a lot of different roles. So just trying to get a more consistent lineup heading into conference.”