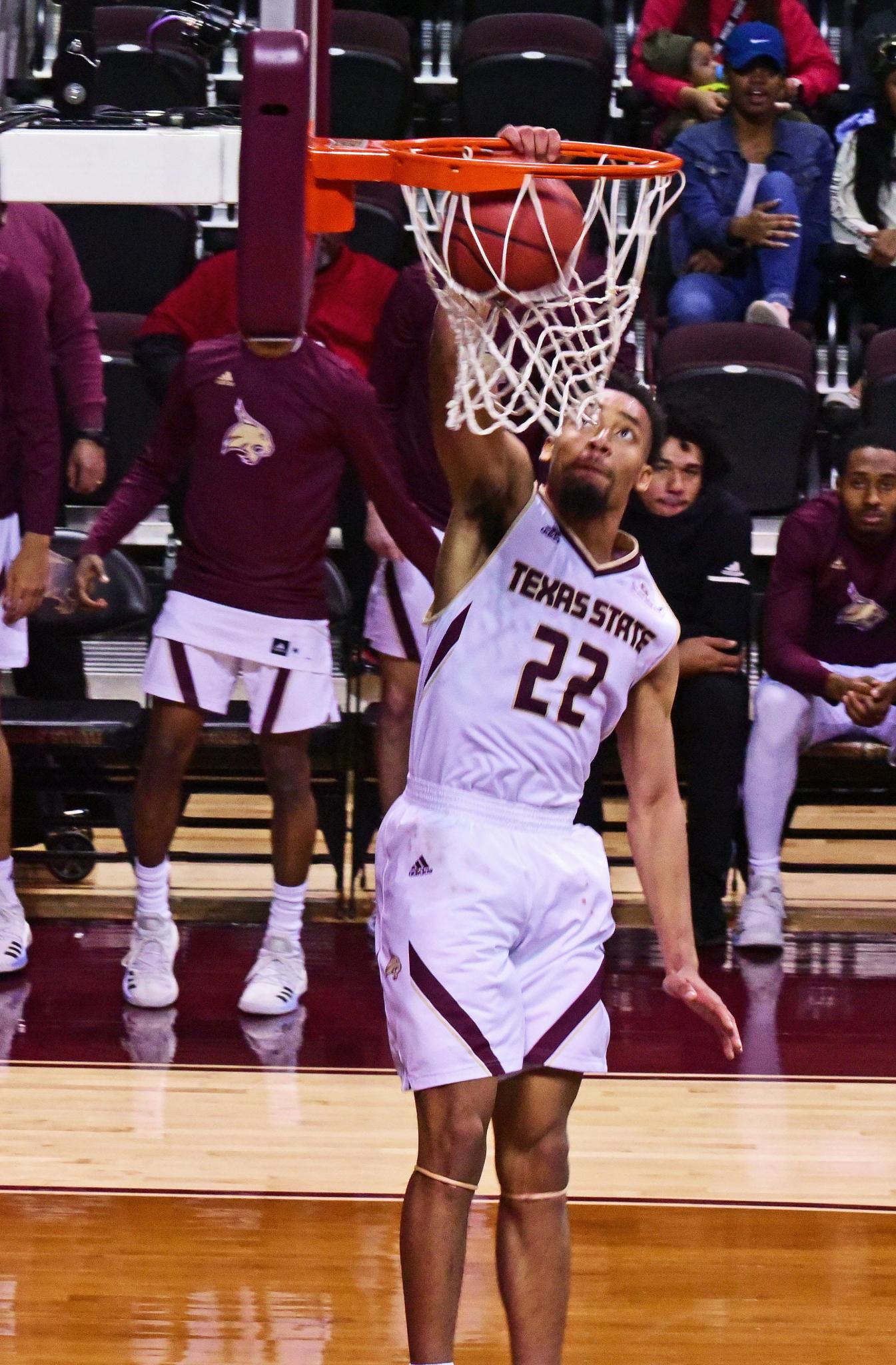 Call Saturday’s game a tune up.

It’s just the kind of matchup Texas State head coach Danny Kaspar likes to schedule in between Christmas and the start of conference play.

The Bobcats easily claimed their 11th win of the season by overpowering Howard Payne, 105-29, in front of a crowd of 1,643 inside Strahan Arena.

“I feel like it was more like a tune up,” junior guard Nijal Pearson said. “We’ve got to get ready for conference and just work on things first game back after the game from Arkansas. We’re learning. Still trying to get better. Now, it’s the time, so we’ve got to go.”

Entering Saturday’s game against the Yellow Jackets, Kaspar put two things on the board that his team needed to accomplish. The Bobcats had to hold HPU to under seven offensive rebounds and they had to prevent their opponent from scoring more than 46 points.

Despite a slow start, Texas State accomplished both of those goals by only giving up seven offensive boards and 29 points. Additionally, the Bobcats had all available players receive minutes on the court — Forwards Alex Peacock and Quintin Scott were both held out of the game due to injuries.

“I’m glad everybody got to play,” said Kaspar, who tallied his 550th career win on Saturday. “I was disappointed by the slow start but other than that I was pretty happy with things right here. They shot 23 percent ... We started off poorly with turnovers but I thought we settled down a little bit.”

Pearson and senior guard Tre Nottingham paced the Bobcats' scoring effort with 22 points each. Sophomore guard Shelby Adams, who made his first career start on Saturday, recorded a double-double with 11 points and a career-high 10 rebounds,

"Those guys just, I mean, y’all wouldn’t know but we know those guys are waiting for an opportunity,” Pearson said. “Whether that opportunity be next year, whether it be at the end of the season, whether it be next game, we’ve got guys that can play. We don’t have any slackers on our team that’s why we get better.”

Defensively, Texas State forced 33 turnovers and scored 53 points off of its opponent’s errors. The Bobcats set a school record in steals with 23.

“The thing about our squad is we take pride in our defense a lot,” Nottingham said. “We understand that our shots aren’t going to fall every night. We do know that we can play defense every night, so every night we go out there with the mindset of trying to cause 15, 17 turnovers a game and I feel like we exceeded our expectations. Everybody was in the lanes. Everybody was guarding the ball pretty well and it’s just good to be back from Christmas break. You guys are in for a treat going int conference.”

Texas State begins Sun Belt play with a two-game homestand. The Bobcats take on Georgia Southern on Thursday at 7 p.m. inside Strahan Arena and then play Georgia State on Saturday at 4 p.m.

Texas State enters conference competition with an 11-2 record but Pearson believes the Bobcats have more to prove.

“I feel like if you’re not undefeated in preseason or non-conference, it means nothing,” Pearson said. “11-2, we lost two, now it’s just can we win a conference championship and that’s the goal. That’s the only goal on my mind right now.”