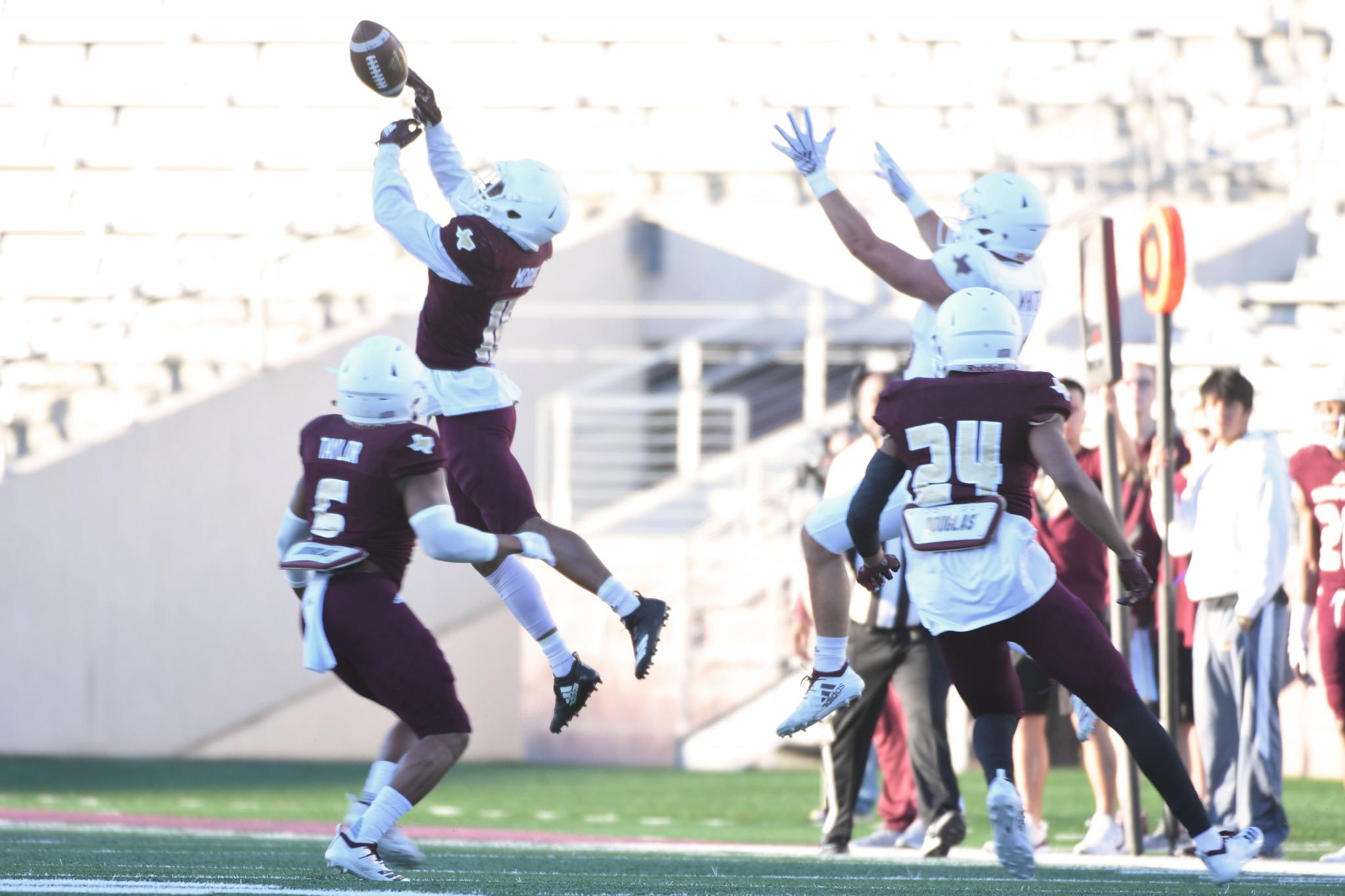 The senior defensive back spent his time away from the field participating in a mentorship program with Bob Dewitt, the associate vice president of investments with the Baird DeWitt Wealth Management Group of Wells Fargo Advisors in Austin. He also interned with Cintas, a Fortune 500 company that provides specialized services to multiple businesses.

The finance major learned a lot on the field, too, getting accustomed to defensive coordinator Zac Spavital’s new scheme. Though he mainly played cornerback as a junior, Taylor said he expects to line up at nickelback this season, with some safety mixed in.

“I feel really comfortable there,” Taylor said. “I like it a lot. I think it targets a lot of my strengths and I'm excited for it.”

The maroon and gold saw eyebrow-raising improvements from its secondary last year. After allowing the fourth-most passing yards per game in the NCAA in 2017, the Bobcats jumped to 39th in passing defense last season with 201.6 yards allowed per game (third-best in the Sun Belt). The team also snagged six interceptions after failing to do so once in the year prior.

Now, with everyone from the 2018 squad but former safety A.J. Krawczyk returning, the position group has a chance to be the best in the conference.

Taylor is one of four senior defensive backs returning to the Bobcats’ 2019 roster. It’s the most Texas State’s had on its team since 2015. Taylor was a senior at Allen High School at the time, helping the Eagles reach the UIL 6A Division I Playoff semifinals.

Fourteen underclassmen populate the team’s secondary. Half of them saw playing time last year. Defensive backs coach Brett Dewhurst said the experience has contributed to the team building some depth at the position.

“There’s competition at all spots,” Dewhurst said. “You can’t just have five guys. We have five guys out there in our nickel and obviously we’re going to play some base for some of these teams that like to run the football … We got guys. Whoever practices the best will go out there and play.”

The other half of the underclassmen is made up of two redshirts and five incoming freshmen. Dewhurst said the rookies have been up and down as a whole during training camp, but could play their way into a few rotation spots. The ups have been impressive. Kevin Anderson, a three-star recruit from Lewisville and the No. 2-rated player in head coach Jake Spavital’s 2019 class, picked off a pass during the team’s half-scrimmage on Wednesday. Taylor called Anderson “one of the luckiest guys (he) knows” due to the freshman’s knack for being in the right place at the right time.

The true freshmen have enviable size, their average height being more than an inch taller than the other 13 defensive backs. But Dewhurst said he wants to see them achieve a better mental understanding of the defense.

“I tell them all the time, ‘DB life's not for everybody. It's hard,’” Dewhurst said. “You gotta adjust and adapt to everything that the offense throws at you. You don't just memorize something, ‘I’m running this route. I just have this. What am I doing versus balance? What am I doing versus two-minute, this, that.’”

The easiest way to make it through DB life is to have trust in the rest of the secondary. That’s what the Texas State coaching staff has tried to build since the start of training camp. Dewhurst said the team’s cross-trained the defensive backs so that they know the responsibilities of every position. The team also combined the cornerbacks and safeties into one meeting room to ensure both positions receive the same message.

“Throughout the week, (Dewhurst) stressed a lot of communication and we communicated a lot,” sophomore cornerback Jarron Morris said. “When we go out there the first week at Kyle Field, it's gonna be loud and stuff. So we gotta communicate, we gotta all be on the same page. We gotta be ready.”

Dewhurst said he’d like to solidify a 10-player rotation by the time the season kicks off and looked forward to evaluating his group during the Bobcats’ full scrimmage Saturday. Morris and Taylor listed lofty goals for the upcoming year, such as earning a bowl game bid and being named to the 2019 All-Sun Belt First Team.

The defensive backs could be one of the best units in the league again this year. They wouldn’t be content, though. They want to be the best, not one of them.

“Every single day, man, we had the mindset that we're not finished. We're not where we want to be. So we always have that hunger inside of us and want to just keep on getting better,” Taylor said. “So I feel like once we grasp that, man, it's gonna be dangerous back there.”