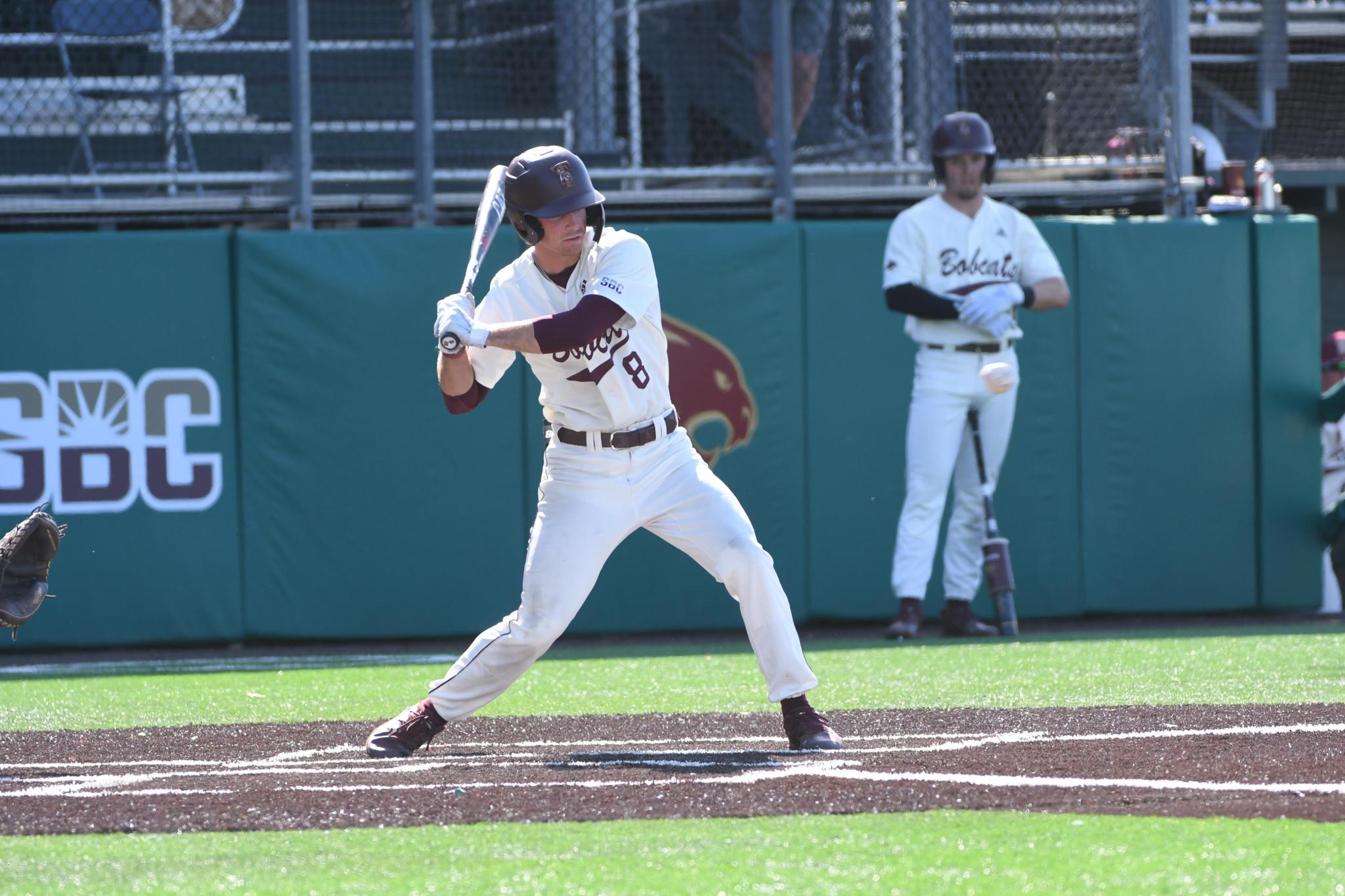 All the momentum Texas State had built up through a 7-4 series-opening win over Coastal Carolina on Friday was lost over the course of Saturday’s game inside Bobcat Ballpark.

The hosts struggled to figure out redshirt senior left-handed pitcher Reid VanScoter, who kept them shut out across the first eight innings of the game. The Chanticleers put up seven runs across the same span of time.

VanScoter finally came out of the game with two outs in the top of the eighth. The maroon and gold took advantage of the change, putting up a five-spot in the bottom of the ninth, but ran out of time to complete the rally, falling 7-5.

“You gotta tip your hat. I thought (VanScoter) was commanding all three pitches, all four pitches and mixing speeds and just never got us comfortable,” head coach Steven Trout said. “And so I'd like to go back on film to see how many mistakes he actually made but I felt like he just did a really good job. And so, that's baseball sometimes, you gotta keep fighting and keep grinding. I was proud of how we fought back there at the end but, you know, obviously too much to recover out there.”

The stakes of Sunday’s game were raised with the series tied at 1-1. Texas State ran into many of the same issues that hindered them a day earlier, falling behind 8-1 after four innings. This time, though, the team gave itself enough of a runway to come back, scoring 12 unanswered runs through the final five frames to earn a 13-9 victory and a 2-1 series win.

“So there was no doubt in this dugout that we were going to get it down. I mean, you could see you're getting close to getting run-ruled on Sunday, but you know, you just gotta keep fighting. So it was a really good comeback.”

After senior shortstop Dalton Shuffield connected on a solo home run in the bottom of the third inning, Coastal Carolina (13-9-1, 2-3-1 Sun Belt) chose to send out a new arm in the bottom of the fourth. The Bobcats (20-5, 5-1) didn’t score but did draw two walks, building up confidence in getting on base.

Senior outfielder Ben McClain led the fifth off with a base hit. Shuffield replaced him on first, hitting into a fielder’s choice. Junior outfielder Jose Gonzalez drew a walk two plate appearances later and senior third baseman Justin Thompson cleared the bases by knocking a home run over the batter’s eye, cutting the Chanticleer lead in half.

Justin Thompson (@jt_thompo) smacks one over the batter's eye for a 3-RBI home run, slashing the lead in half 🔨 pic.twitter.com/UiFRvrIimN

Texas State sophomore RHP Otto Wofford took over on the mound to begin the sixth and gave up a single to begin the inning but struck out the next three batters he saw. A double down the right field line by senior second baseman Cameron Gibbons brought in a run for the hosts and put two runners in scoring position. McClain got a single to drop in left center, plating both. Shuffield added another base hit to move McClain to second and senior outfielder John Wuthrich hammered another home run over the left field fence for three more scores, giving the Bobcats their first lead of the day at 10-8.

Senior closer Tristan Stivors pitched the final three innings for Texas State, allowing just three hits, one walk and one run the rest of the way. Junior catcher Peyton Lewis added three insurance runs in the bottom of the eighth, swinging for a double with the bases loaded. CCU hit a solo home run in the top of the ninth but couldn’t recover in time, suffering the 13-9 loss.

Shuffield went 6-12 across the three-game series, tallying one RBI, six runs, a double, triple and home run. It was the first series win against Coastal Carolina of his career.

“I'm not gonna lie, I'm just trying to hit the ball as far as possible. And right now, things are going pretty well. So I'm going to keep doing that until it runs out of power,” Shuffield said. “They're a tough opponent, great team. And we just went out there, battled with them and came out on top, two out of three.

“You know, things got a little tense. But Coach kind of got us in a huddle and he was like, ‘Hey, look, if we get into their pen, we're gonna be just fine. And I know our hitters do what we do. And we're going to get back in this ballgame.’ And that's exactly what happened.”

Wofford (2-0) was credited with the win on Sunday. Stivors earned his seventh save of the season and now has 16 in his Texas State tenure — three shy of tying the program record.