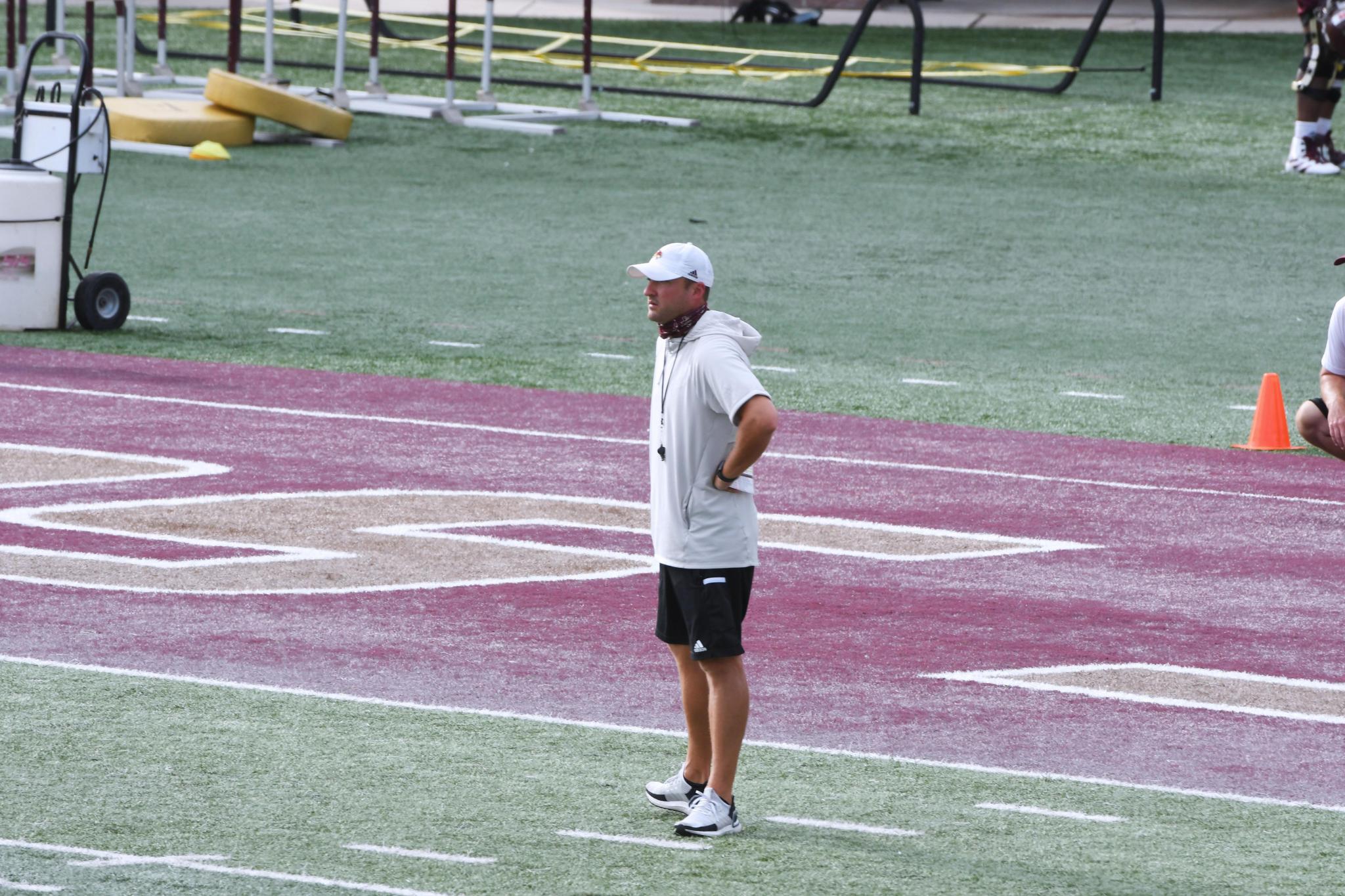 Texas State lost a second game off its schedule in the middle of practice.

New Mexico State announced Thursday morning it was postponing its fall football season to the spring due to player safety and health concerns in addition to the 14-day quarantine requirement for those entering the state. The Aggies were scheduled to host the Bobcats in Las Cruces, New Mexico, on Oct. 3. They join Ohio as the only two teams on Texas State’s schedule who do not plan to play this fall.

Head coach Jake Spavital wasn’t too surprised by the news. NMSU had been trending in that direction for a while. But despite seeing another game getting canceled, Spavital remains optimistic a fall football season can take place.

“Unfortunately, you hate to see that for New Mexico State but they’re doing what they believe is right for their program,” Spavital said. “And you know, again, that gives us a lot of opportunity to still schedule. I know there’s discussions of the FCS shutting down, too. Which, that’s going to open up other opportunities because I know a lot of Big 12 teams and, you know, you really look at the American (Athletic) Conference and Conference USA, they’re all playing FCS opponents. So who knows how it’s gonna end up? I know that we’ve got 10 for sure scheduled and everybody’s ready to roll. We’ll see what happens with those other two spots.”

The Bobcats have been working the past two weeks to make sure every player is “ready to roll.” Spavital put the team through a grueling practice on Thursday, placing his players in tough game-like scenarios to see how they read and react.

It’s given him a good look at many of the more than 50 newcomers on the squad. Spavital was particularly impressed by the linebacker group, which arguably lost the most experience from last season with eight seniors leaving.

“Those new guys that we brought in, Christian Taylor and Brayden Stringer and Sione Tupou … Sione is a really good player, man. Those guys have played a lot of snaps,” Spavital said. “The two Texas Tech guys (Stringer and Taylor) have got a great familiarity with this scheme and have seen it all, so they’ve came in and they understand where it’s at. Sione, you know, was a three-year starter at UTEP, so he knows everything. We’re sitting there in a two-minute drill and it was like he was picking my signals. But I asked him afterwards and he just was pretty much saying that, you know, he’s played a lot of ball and those are the things that he’s seen in those situations before. So I’m pleased with those guys.

“What’s been fun is letting these young guys go, with the Emmanuel twins (John and Josh) and Issiah Nixon. You know, we’re throwing them in the fire and these are the times, because we’ve talked about how COVID, anything can happen, and we gotta just keep prepping.”

Spavital said he’s also enjoyed seeing the development of redshirt freshman Alan Orona as the team’s leading kicker and the progress sophomore punter Seamus O’Kelly has made since last year.

“The edge right now is Alan Orona,” Spavital said. “I’m telling you, like, he’s got a live leg, he puts a really high trajectory on the ball. But again, he doesn’t have much game experience and it’s up to the offense, you know, to put him in favorable situations so we’re not kicking those long field goals.

“But you know, pleased with the kicking game. You got Seamus back from punting, so you’ve got experience there. And Alan’s been around for a year now and is doing some great things. So you see us out there in these scrimmages, you know, we’re trying to put him in situations and scenarios where he’s got to hit a live kick for a game-winner. So you know, he did probably about five, six of those today. And you know, we’re gonna expect him to do that a lot on our Saturday scrimmage. So again, Coach (Nick) Whitworth does a really good job at putting those kids in great situations and putting a lot of time and effort into them. But right now, Alan Orona and Seamus are the two guys going forward.”

The head coach plans to reward the team’s effort with a rest and recovery day Friday. The team will wrap up fall camp on Saturday with a full-pads scrimmage. Next week will focus on any make-up work that needs to take place for players who have been held out of practice — Spavital said a few have been quarantining due to allergy-like symptoms, though they tested negative for COVID-19.

The week after will be Texas State’s mock game week, where the team will go through the motions of preparing for a typical regular season contest. Then, the Bobcats will turn their focus to the season-opener against SMU.

They still have to work through multiple safety measures to make sure it all happens. One of the primary reasons the Big Ten chose to postpone fall competition was due to the uncertainty of heart issues that have been linked to the virus. Myocarditis, a rare condition that enlarges the heart muscle, was found in at least 15 Big Ten athletes who contracted COVID-19.

Spavital said he hadn’t talked to Texas State’s medical officials in much detail about heart-related issues but that it’s always been a main topic of concern.

“I know there’s a lot of necessary steps and protocols — like, if you test positive for COVID, you’re not coming back for a while. You know, I think it’s a minimum of 24 days right now,” Spavital said. “So there’s an acclimatization period and they gotta go through (electrocardiograms), they gotta do a lot of studies of the heart and everything before they’re allowed to be cleared and put on the field. So, you know, the way I look at it is, is if someone — if a student-athlete does test positive for COVID, I’m not really planning on them coming back or finishing the season off. But what we do is we listen to the medical professional. We have alerted them, the team, about the severity of this, what it does to the heart. And again, everybody reacts differently to this and we gotta make sure that we’re taking the necessary protocols and studying each kid thoroughly and making sure that they’re comfortable and making sure we’re doing the right things.”

The college football landscape is shifting daily. Of a possible 130 FBS teams, 54 will not play in the fall.

But as long as the team is allowed to, Texas State will continue to plan for the upcoming season.

“Overall, pleased with the effort that these kids have been bringing every single day. I just, I’m really enjoying this team,” Spavital said. “I think that they’re just extremely excited that we’re going to be able to play a football season and kick this thing off. So a lot of optimism with the group right now.”