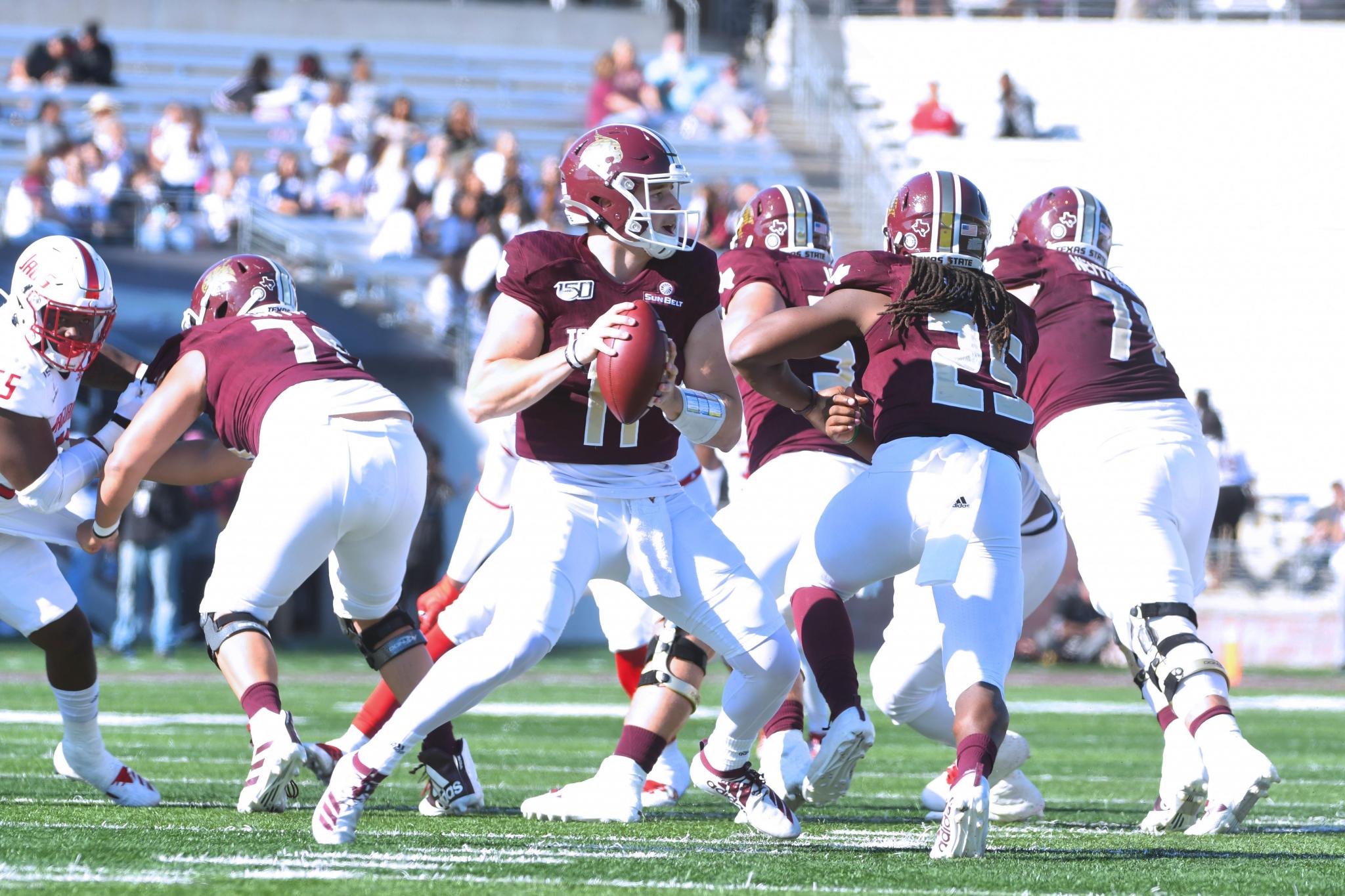 Texas State chose to make its quarterback change on Wednesday of last week.

Redshirt sophomore quarterback Brady McBride, who started the first seven games of the season, injured his ankle during Oct. 23’s game against Georgia State. He was able to practice Monday and Tuesday, but his coaches could tell he was still playing through pain.

The Bobcats pivoted to junior Tyler Vitt, a veteran with 16 career starts under his belt, though Spavital said McBride was kept available and could have played in an emergency scenario. The team, preparing for one of the Sun Belt’s better passing defenses, had already planned to use a run-heavy scheme against the Ragin’ Cajuns and include Vitt in a few of the rushing packages.

Vitt finished with a game-high 94 yards on the ground on 15 carries while also completing 6-of-13 passes for 42 yards. Texas State, however, turned the ball over three times — two lost fumbles from a pair of running backs and an interception by Vitt — and failed to score for the first time in 19 years. Louisiana rolled to a 45-0 win, earning a second stint in the AP Top 25 Poll at No. 24.

“Obviously, tough day at the office,” offensive coordinator Jacob Peeler said. “(We) just didn't execute at the times that mattered most. You know, ball security, we can't continue to turn the ball over. I know we've said this before and we gotta continue to take care of that, continue to execute in critical moments and stay on the field.”

In a rare move, Director of Athletics Don Coryell penned a letter addressed to Bobcat Nation that was posted by the athletic department’s main Twitter account on Monday at 12:08 p.m. Coryell expressed his disappointment with the results of the football program, but also voiced his support for Spavital and made promises to increase the team’s operations and recruiting budgets.

“We remain committed to doing what it takes to get our football program back on the winning track and ensure a culture of athletic excellence for years to come,” Coryell wrote. “I am absolutely confident that Texas State Football will become a perennial winner and a point of pride for our university. I know President (Denise) Trauth and our Texas State Community share in that belief. We are grateful for your continued support, even when times are rough. Together, I know we can do something special for Texas State and our student-athletes.”

The letter, along with the maroon and gold being a loss away from losing out on bowl eligibility, points to a very important four-game stretch to close the season.

The Bobcats begin the slate with a homecoming game against Louisiana-Monroe, led by new head coach Terry Bowden. The Warhawks, who were picked to finish last in the conference’s West Division in this year’s preseason coaches poll and listed as one of Texas State’s “likely wins” before the year began by Bill Connelly of ESPN’s SP+ ratings, have surprised some with a 4-4 start to the season.

Spavital isn’t sure yet who his starter behind center will be this week, with McBride’s ankle still on the mend. Vitt took reps with the first-team offense during 11-on-11 segments at Tuesday’s practice, with redshirt sophomore Ty Evans running with the twos and McBride taking limited snaps. The head coach said McBride looked much better than he did a week ago, though, and expected him to be “in the mix” as the week progressed.

“The pain has now moved from the front of his foot to the side of his foot, which is a good sign,” Spavital said. “So we gotta keep monitoring where he is. He's gonna be more of a game-time decision.”

ULM ranks as a bottom-three defense in the Sun Belt in both yards and points allowed but presents a challenge as a unit that can show multiple fronts throughout a game. Peeler said it’ll be important for the Bobcats to play things by ear and execute what they do best.

Texas State hosts its homecoming game against the Warhawks inside Bobcats Stadium Saturday at 2 p.m., the game streaming on ESPN+. It’ll be a must-win contest for both sides for them to keep their hopes of bowl eligibility alive.

“We're excited about the challenge, another chance to get back home another home game,” Peeler said. “And you know, I think we're all kind of chomping at the bit to get back going after last week — that was a tough game.”