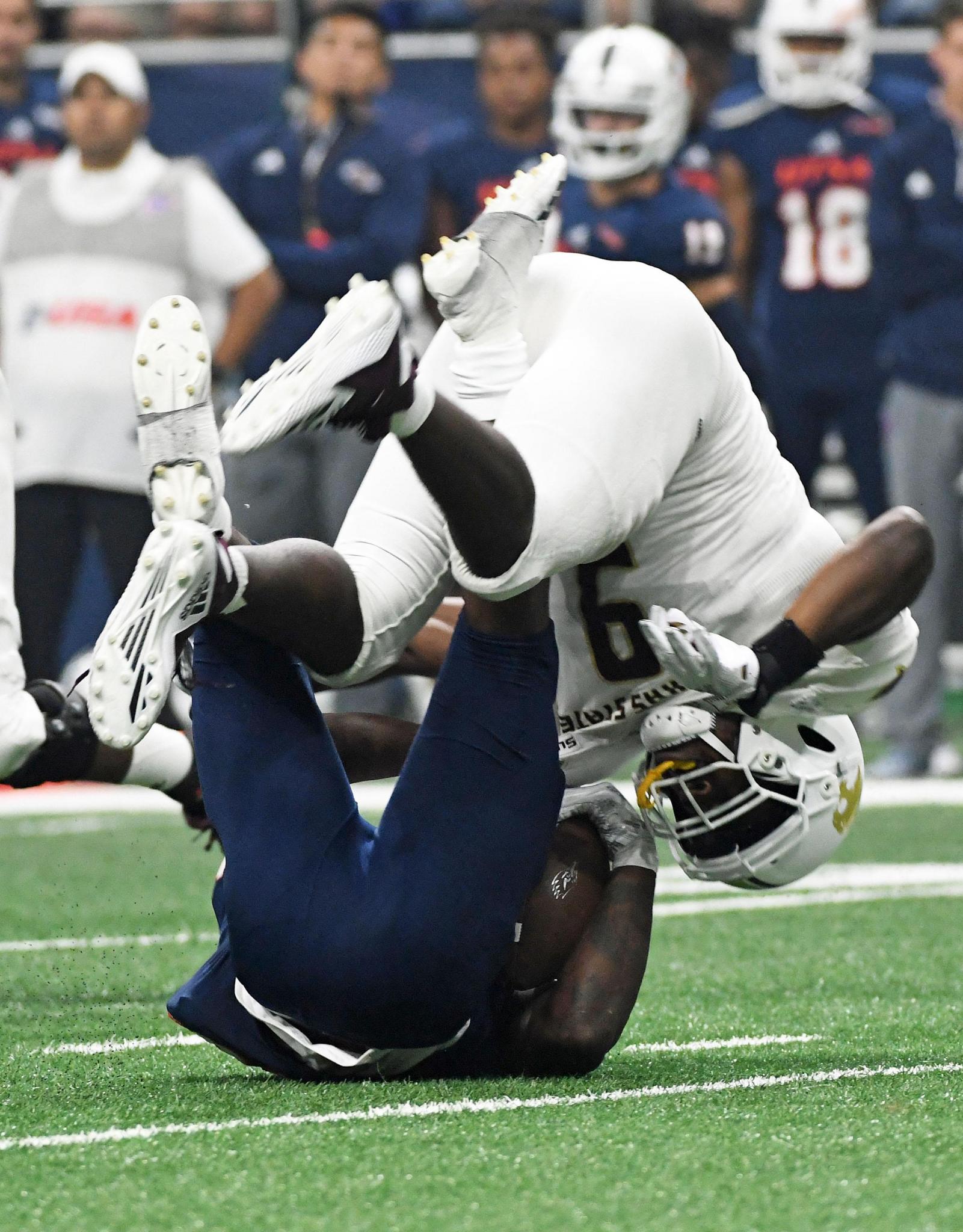 SAN ANTONIO — How close can Texas State come to winning and not claiming the victory? Junior Bryan London thought about it quizzingly Saturday night.

The Bobcats came close for the second week in a row. But again, Texas State fell short against UTSA in 25-21 fashion in front of a raucous crowd of 29,205 inside the Alamodome in San Antonio.

Head coach Everett Withers called 2017’s 44-14 loss to UTSA in the I-35 Showdown an “ass kicking.” This year, however, Withers said his team fought their asses off.

Texas State (1-3, 0-1 Sun Belt) began Saturday’s game against the Roadrunners (1-3, 0-0 Conference USA) in similar fashion as last season, with its quarterback fumbling the ball. On the Bobcats’ third play of the game, sophomore quarterback Willie Jones III lost the ball and UTSA sophomore defensive end Lorenzo Dantzler picked it up and rumbled 27 yards for a touchdown.

On the next possession, Jones went down after a run for no-gain. The Silsbee native's left arm came up limp. He fell down at midfield and left the game for the rest of the night — the extent of his injury is unknown.

First redshirt freshman quarterback Jaylen Gipson took over the helm. But the offense couldn’t find its rhythm behind Gipson.

The Bobcats quickly found themselves in a 14-0 hole after a 7-yard touchdown pass from UTSA junior quarterback Cordale Grundy to freshman wide receiver Tykee Ogle-Kellogg.

Texas State eventually went to freshman quarterback Tyler Vitt, who injected new life into the Bobcat offense. On his first snap of the game, Vitt connected with fifth-year senior tight end Keenen Brown for 23 yards. Then Vitt caught a 26-yard pass from junior wide receiver Hutch White. Vitt capped off the 6-play, 64-yard touchdown drive with a 1-yard quarterback sneak to cut the Roadrunner lead to 14-7.

Despite Jones’ injury and the quick start from UTSA, Texas State only saw itself down 17-7 at the half.

“(The defense) battled,” Withers said. “When you’re playing rivalry games and play games like this, you know, emotion comes into play and we weathered an early storm. The defense, I thought, did an unbelievable job. For us to go in 17-7 at halftime was unbelievable. And I told the kids at halftime, ‘If we keep playing defense the way we’re playing it, we’re going to have a chance to win this game,’ and we did. We had a chance to win.”

Texas State cut the Roadrunner advantage down to 17-14 midway through the third quarter when Vitt connected with Brown for a 21-yard touchdown.

But UTSA responded with a 40-yard field goal from sophomore kicker Jared Pickett, and then surprised the Bobcats with an onside kick that the Roadrunners recovered, which resulted in another 44-yard field goal.

Texas State junior running back Anthony D. Taylor gave the Bobcats a spark on special teams when he blocked a UTSA punt — his first block of the season and fifth of his career.

Texas State took advantage of the short field when Vitt found White on slant for a 17-yard touchdown to bring the Bobcats to within 23-21.

The Bobcat defense held strong on the following possession. On a 3rd and 1, senior defensive end Ishmael Davis and senior linebacker Frankie Griffin teamed up for a 2-yard tackle for loss.

“We knew what we had to do to give our offense a chance to win,” London said. “So, we were just like, ‘All right, job is done.’ Just became fans of the offense.”

Texas State began its potential game-winning drive at its own 2. But hopes of a comeback were thwarted on the first play of the drive. Vitt, who appeared to be running a designed draw, was stuffed in the endzone for a safety.

“It hurts,” London said. “Like, every game hurts, but you put yourself in a position to win and you don’t, it hurts, especially in a rivalry game where emotions are kind of high. It hurts.”

For the second consecutive week, Texas State fell short of pulling out a key win. Yet, the Bobcats feel confident the wins are coming, even though this loss to their rival stings.

“We’re going to start pulling out a lot of wins,” said Brown, who finished with a career-high nine receptions for 124 yards and a touchdown. “We’re a close team. Coach says we’re a couple steps away, a couple plays away. So, we just got to practice this week and next week, and we’re going to pull out some wins.”