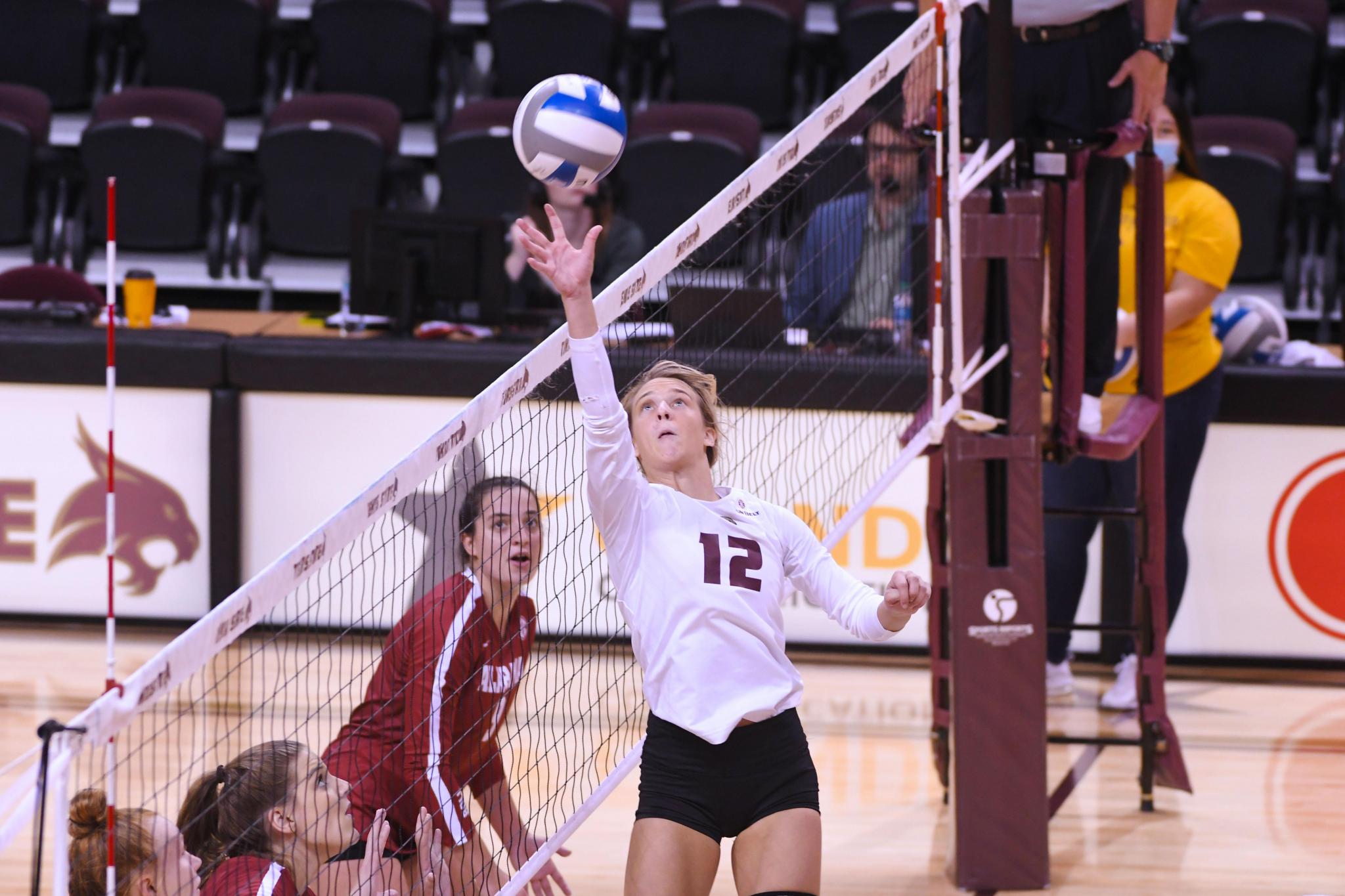 There are many that the Bobcats could make and have made. They’re coming off a 10-month season. Their schedule is tough. They’re down multiple players, including their star setter.

“Not acceptable in our program,” Huiet said. “We're just inconsistent. We pick and choose when we're gonna work hard. You see us play really high-level volleyball for a while and then let them go on runs of five-to-six points. You know, that's not championship-level.”

The absence of Sun Belt Preseason Setter of the Year Emily DeWalt has left the maroon and gold offense scrambling a bit. The senior exited the team’s match against Ohio State early on Sept. 4 with an injury to her right rotator cuff and hasn’t stepped on the court since.

Huiet has turned to sophomore Ryann Torres to fill in the gap. Torres got limited experience playing in 12 matches in the 2020-21 season and has averaged a respectable 7.5 kills per set since DeWalt has been sidelined. But it’s still a big step up in competition for her — on Tuesday, she was tasked with making her second career start against the No. 1 team in the nation in Texas.

“We talked to Ryann a couple weeks ago about how much she's matured,” Huiet said after the match against the Longhorns. “If Emily was back, we would feel comfortable with Ryann playing right back and serving. She served for a couple of people and so she's gonna just mature in the game a little bit. And so, she's more comfortable doing some of those things, which has been good to see.”

Huiet tried taking some of the pressure off Torres on Friday by switching from a 5-3 rotation to a 6-2, which allows an extra setter and hitter to get into the mix. But without another healthy setter on the roster, fifth-year senior Brooke Johnson had to turn back the clock.

Johnson was recruited to Texas State as a setter and made 15 starts at the position in her freshman season in 2017. She was moved to a reserve role the next year after DeWalt arrived in San Marcos but still dished out 92 assists across 115 sets. Former head coach Karen Chisum wanted to find a way to get Johnson more playing time in 2019 and converted her into the team’s libero. Johnson has stayed on the back row as a defensive specialist since, until Friday night.

She posted 15 assists against the Crimson Tide and 17 against the Hurricanes, both marks counting as the most in a match for her since Nov. 2, 2018.

“I mean, I started setting in practice a few days ago,” Johnson said. “They told me, 'You gotta get your hands ready, we might run a 6-2.' So I was like, 'Wow.' But I mean, I thought I adjusted pretty well. You know, I haven't done it in years, so I had to dust the rust off a little bit.”

Even with Huiet’s creative stopgaps, the Bobcats struggled to hit at times, especially when passing to their middle blockers. Fifth-year senior Tyeranee Scott and junior Tessa Marshall combined for just five kills with four errors on 26 attempts against Miami.

Graduate outside hitter Jada Gardner was a steady presence, tallying double-digit kills in both of Friday’s matches. But Huiet was expecting even more from players who have loads more experience with this team.

“Jada came from a program (Maryland) that's not used to winning and she's leading us every match. Which, again, great for her. But that's unacceptable for our upperclassmen and our kids that have been in the program for this long,” Huiet said. “She should be coming in and learning from them and helping them.”

Texas State (2-7) has four matches left on its non-conference slate. The team will host Texas A&M (4-2) on Tuesday at 6 p.m. looking for redemption.

The Bobcats have shown they can at least compete in spurts against the high level of opponents they’ve seen this year. They just haven’t been able to do it across full matches consistently. For instance, after dropping their first two sets to the Hurricanes on Friday, the hosts began the third on a 5-0 run. Miami still came back to clinch the set and the match.

Huiet hopes that’s something that changes soon, with or without DeWalt — the setter had a doctor's appointment this week but hasn't been given a timetable to return and is considered day-to-day. DeWalt, Johnson and senior libero Kayla Granado were all recognized Friday for reaching 1,000 career digs this season. But it's a bit difficult to celebrate those types of accomplishments when the team is coming off a loss.

“It's not negative in our locker room, it's not anything like that,” Huiet said. “It's just, we just told them, we didn't think we'd be talking as much (about) the mental side of this with a senior-led team. We thought we'd be talking more X's and O's. And you know, I told them, from top to bottom, we're mentally soft right now.”