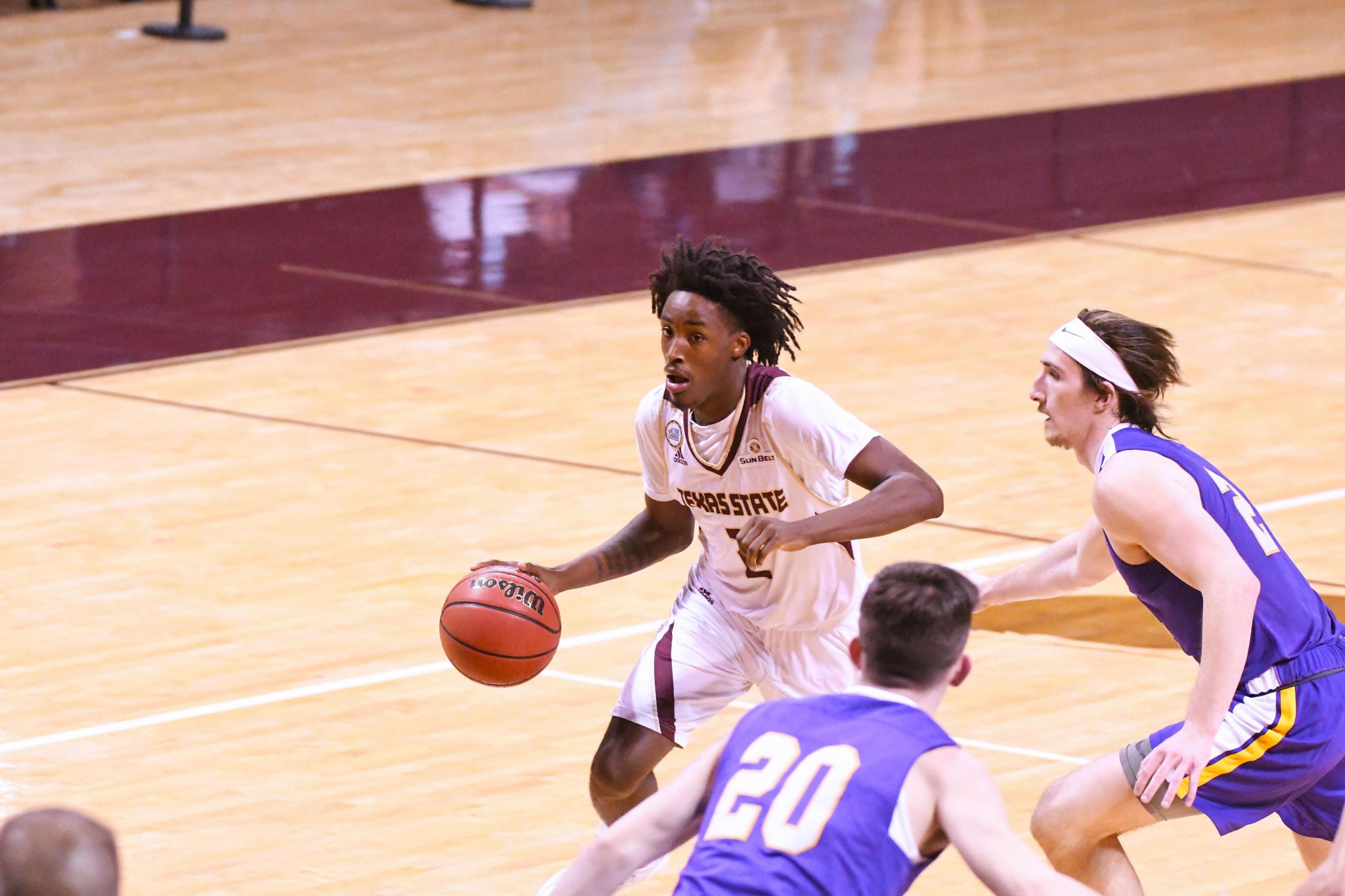 The Bobcats (8-4, 2-1 Sun Belt) made nine of their first 11 field goal attempts, going 4-5 from behind the arc. On the other end of the court, the visitors held the Trojans to 3-9 from the field during the run, including 0-3 on 3-point attempts, and forced three turnovers.

“I was proud of the way our guys competed,” interim head coach Terrence Johnson said in a statement. “We defended really well early on, and that led to some good looks on the other end.”

The result was a 23-6 lead by the 11:50 mark of the first half. Texas State kept its edge the remainder of the game but nearly surrendered it in the final minute of the second half.

Little Rock (7-5, 3-2) chipped away at the Bobcats’ lead, bringing it down to single digits by halftime at 34-25. The advantage ballooned back to 15 points at the 12:47 mark of the second half, but was shrunk back down at 59-50 with 54 seconds remaining on the clock following a layup by Trojans sophomore guard Marko Lukic.

Texas State senior forward Isiah Small inbounded the ball to junior guard Caleb Asberry. Little Rock senior forward Ruot Monyyong swiped at the ball, then tried to wrestle it away from Asberry and was called for a foul. After getting tangled up, Monyyong appeared to shove Asberry to the ground, sparking an altercation between the two teams.

Bobcats redshirt senior guard Marlin Davis and Trojans junior guard Markquis Nowell both swung punches at each other, neither connecting. Johnson, Little Rock head coach Darrell Walker and officials stepped in to separate the players. Davis and Nowell were both ejected from the game as a result.

Lukic stole the ball from Asberry on the next possession and found senior guard Ben Coupet Jr. for a triple to bring the lead down to six. Monyyong fouled Harrell on a fastbreak, and Harrell made both his free throws to extend the lead to eight.

Monyyong made back-to-back putback layups and junior forward Nikola Maric drained a pair of foul shots to cut the deficit to 61-59 with nine seconds still on the clock. But Texas State redshirt sophomore guard Addison Wallace sank two free throws after being intentionally fouled and Coupet missed his last 3-point attempt, sealing the 63-59 win for the Bobcats.

“It was a hard-fought game. Little Rock is one of the best teams in the league, so we expected it to be an intense game,” Johnson said. “Certainly, these are back-to-back, and tomorrow is a new game, so although I am happy for our guys, the job is not done. No time to celebrate. We have to rest and rehab and be ready to get better tomorrow.”

Texas State held the hosts to a 38.5 field goal percentage. The Bobcats are now 5-0 this season when its opponent shoots less than 40.0%. The team also made a season-high nine 3-pointers during Friday’s game.

Asberry led the team with 18 points, followed by Harrell with 16. Davis secured a double-double by posting 12 points and 10 rebounds while also adding a team-high five assists.

The maroon and gold have now won six of their last seven meetings with Little Rock. The team will look to continue the trend when they face the Trojans again on Saturday at 4 p.m. Davis and Nowell will be held out of the contest due to their involvement in the altercation, but senior guard Shelby Adams is cleared to play after missing Friday’s meeting.