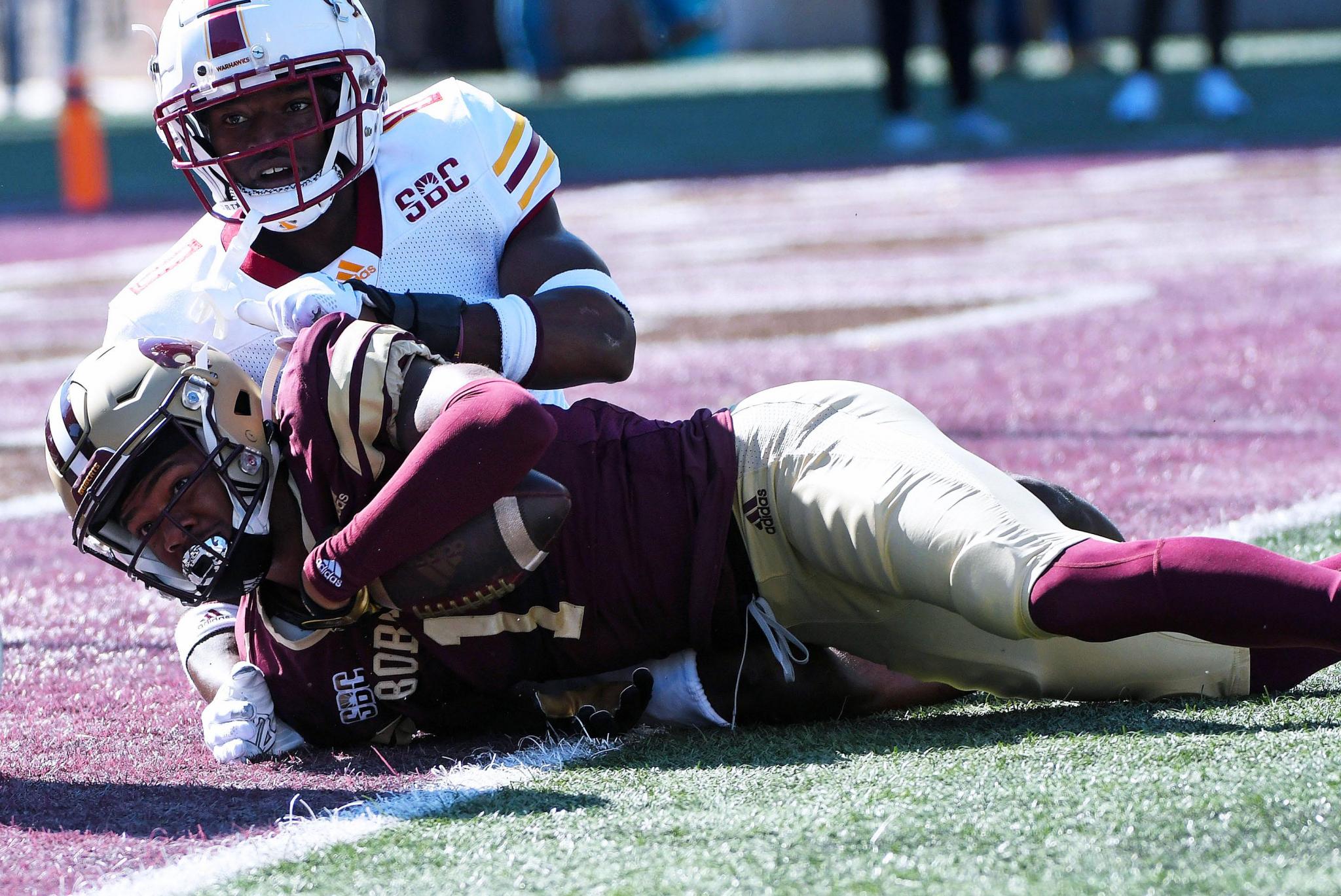 Jake Spavital said Texas State has had the same mantra all season.

“Just keep showing up,” the head coach said. “Keep swinging. Stay true to the process. Keep the energy. Keep the optimism. And eventually, the ball is gonna bounce your way.”

The team kept showing up after a blowout loss to Louisiana last week. The Bobcats kept swinging after falling behind 6-3 early in the first quarter of Saturday’s game against Louisiana-Monroe. They stayed true to the process, even after failing to score during the first 28 minutes of the second half. They stayed optimistic despite committing more penalties, converting fewer third and fourth downs, and keeping possession for a smaller amount of time.

And the ball bounced their way. Texas State hung on to defeat the Warhawks inside Bobcat Stadium, 27-19.

“I couldn't be happier for that locker room,” Spavital said. “I think every Sun Belt game takes like two years off my life. What a game, you know? And who would've thought it would end like that?”

The maroon and gold, playing in front of a homecoming crowd of 16,237, caught a break early when ULM senior kicker Calum Sutherland missed an extra point attempt after a touchdown by sophomore running back Andrew Henry.

Junior quarterback Tyler Vitt and his receivers helped Texas State stay afloat. Coming into the game, redshirt sophomore quarterback Brady McBride was considered to be a game-time decision. Spavital said McBride felt good enough to play and that the staff thought about playing both him and Vitt on Saturday. But Vitt received his second start of the year and, after a strong showing in the first half, remained behind center the rest of the way.

.@17tylervitt17 targeted @JavenBanks1 downfield two other times today, but finally found him on the third try

Banks now has a career-high 5 TDs this year. He also now has 16 scores in his career, tied for fourth-most in program history @smdrsports https://t.co/HQAqZacojI pic.twitter.com/YHdGCR1ewA

After Henry’s touchdown, the Bobcats went on a five-play, 75-yard drive that ended with a 49-yard scoring pass from Vitt to junior wide receiver Javen Banks. On the hosts’ next possession, Vitt completed five consecutive passes, setting up senior running back Caleb Twyford to punch into the end zone from a yard out.

Banks’ TD was his fifth of the year, a single-season high, and the 16th of his career, moving him into a tie for fourth-most in program history. Twyford’s score was his first since Oct. 26, 2019. Junior wideout Marcell Barbee had four catches for 84 yards by the end of the half, earning a career-high in just two quarters. Vitt was 12-of-21 for 210 yards, guiding the team to a 20-16 edge at the break — the largest halftime lead for the Bobcats this year.

“I thought we had a good balance. It was a lot of fun,” Vitt said. “We just kind of went back to our basics and stuff like that, stuff that we worked on in fall camp … And it really paid off for us. We all felt comfortable and we were on the same page.”

The Warhawks kept the ball out of Texas State’s hands in the third quarter, though. The Bobcats only held possession for 3:14, running eight plays for 20 yards on two drives. ULM kept the hosts in check at the start of the fourth, too, forcing punts on the next two drives.

But Texas State’s defense held firm. The visitors capitalized once with a 45-yard field goal from Sutherland. But when they tried again early in the fourth, letting Sutherland kick from 51 yards out, the ball sailed wide right to keep the score at 20-19. The team didn’t enter Bobcat territory for the rest of the game.

“(ULM) never had a drive that they just went right down the field and scored,” Spavital said.

“People just took their job to the next level. Like, more seriously. That's what we've been preaching,” senior linebacker Markeveon Coleman added.

Sophomore running back Jahmyl Jeter broke the maroon and gold’s cold spell with a 26-yard rush to the end zone — though, the Warhawks’ defense gave little resistance, wanting the ball back in a hurry with under two minutes to play and just one timeout. ULM gained 19 yards on the next drive, but suffered a turnover on downs. Vitt kneeled on the final play to run out the clock and give Texas State its 27-19 victory.

Three Bobcats reached double-digit tackles — Coleman with a career-high 14 and defensive backs Zion Childress and DeJordan Mask with 11 each. The defense as a whole produced five sacks and four pass breakups.

“After every (win), everybody feels confident. Confident in their skill, confident (in themselves),” Coleman said. “Sometimes when you're taking them L's, it can kind of like make you question yourself and like, question your abilities. And when we get that win, we don't question it no more.”

Texas State’s bowl eligibility hopes remain alive, but the team will need to stick to its mantra and win out the final three games on the schedule. That begins with Georgia Southern next Saturday, as the Bobcats play in their final home game at 1 p.m.

“We talk about (how) every week is a new season. Every week,” Spavital said. “You know, you gotta enjoy it while it lasts. But we gotta strap it back up again and do it again because this league is pretty wild, man. I'm expecting it to be just another diverging game next week where we're gonna have to be able to step up and rise to the occasion and play.”