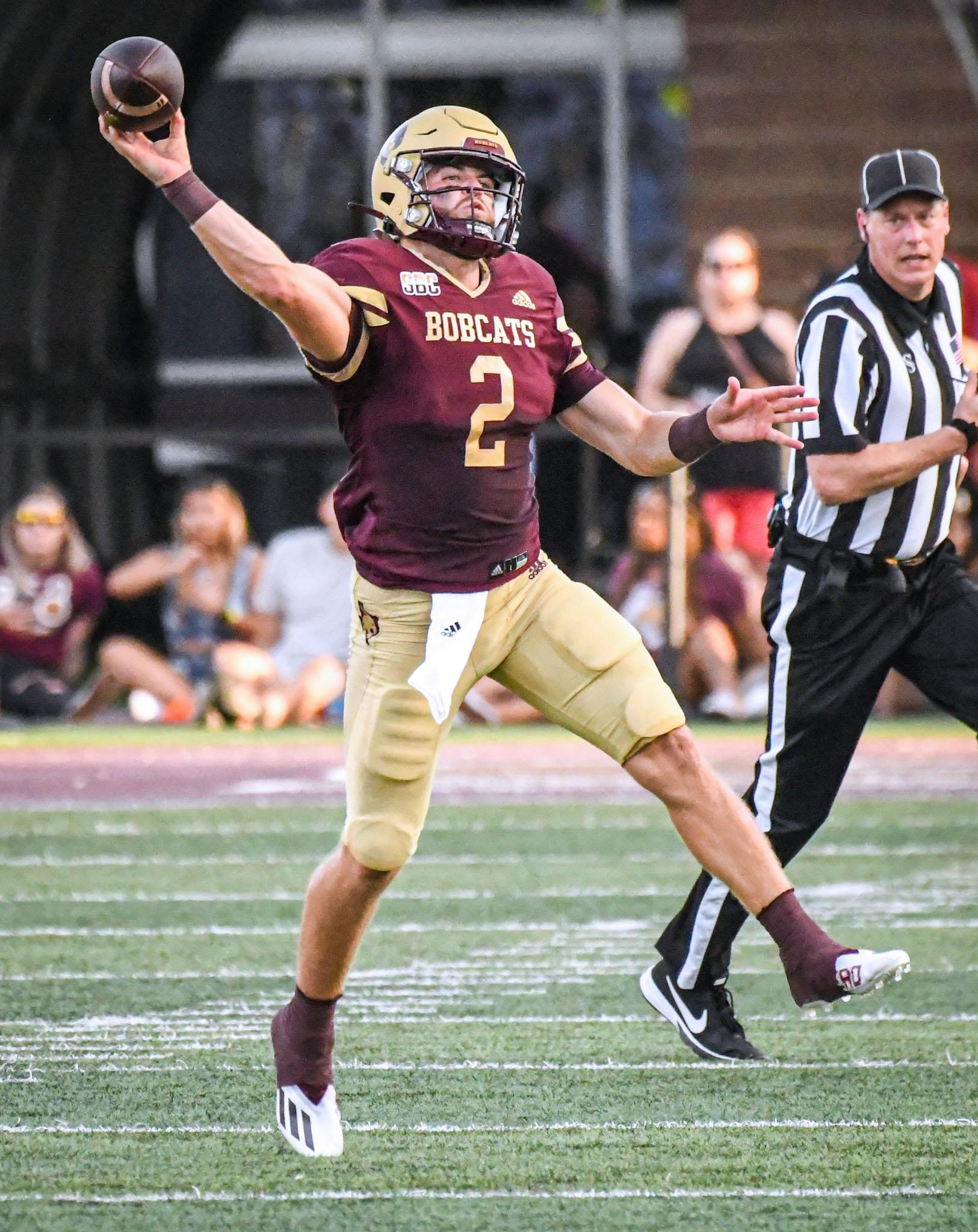 Texas State hoping to bounce back at FIU

Texas State head coach Jake Spavital is willing to work with Brady McBride through the quarterback’s mistakes. The pros of putting the redshirt sophomore behind center still outweigh the cons.

McBride flashed both ends of the spectrum last week against Baylor. On one hand, he threw three interceptions.  Spavital said the first pick was an underthrown ball on an out route that the Bears returned to the end zone. The second was a scramble drill gone wrong, stemming from a lack of healthy offensive linemen. The last was a 3rd and 18 scenario in which the coach told the quarterback to throw it as far as he could, treating the play like a punt. Baylor intercepted it 54 yards downfield.

But on the other hand, McBride completed 20-of-40 passes for 156 yards and one touchdown and extended numerous plays with his feet. In one example, he received the snap, rolled to his right, saw a defensive lineman waiting for him there, spun back around and found freshman wide receiver Donnovan Moorer for a 23-yard pass, picking up a first down. The Bobcats went 4-14 on third down conversions, all four coming on passes from McBride.

“I talked to a golf coach a long time ago. And he always talked about, you know, when you recruit golfers, you want the guy that can hit the eagle and possibly a hole-in-one and hit birdies,” Spavital said. “But if it's a guy that's going to be hitting eagles and birdies, but then also have a few triple bogeys, you still want that kid. And then you gotta try to minimize it because he has the ability to make that big play, you know, that big shot, instead of just putting in a guy that's just going to be a par shooter in golf. So I always thought that was an interesting way to look at it. And with Brady, he's that way. He's got that ability to make explosive plays.

“But with that being said, you gotta understand when to throw the ball away. And I thought he was pressing a little bit in that second half when we were down 14, and that kind of led to more … So we've had those talks but at the same time, we don't want to handcuff him. I want him to go play his game and we just gotta minimize those kind of reckless throws at times.”

McBride and the offense will need to be sharper this week against Florida International (1-0). The Panthers ranked as the No. 15 passing defense in the nation, only allowing 187.2 yards through the air per game in 2020. Spavital has a lot of respect for FIU’s secondary — the group’s talent is a big reason he thinks the team keeps it “simple” with its front seven.

The maroon and gold should be helped by the return of multiple players who either missed part or all off last week’s contest. Spavital said starting redshirt freshman left tackle Dalton Cooper, in particular, is likely to play after suffering an ankle injury and missing the second half against Baylor. Spavital also said there are approximately three or four players on both sides of the ball that will be game-time decisions.

That includes a defensive line unit that had just eight players available in the season opener. Texas State’s D-line will be especially important against a pair of Panthers running backs that averaged 6.6 yards per carry last season.

“They're going to try to hit you in the face,” defensive coordinator Zac Spavital said. “They're a pro-style run game. I mean, you're going to come out the first series and we might see inside zone, split zone, and then the next series you're gonna see a different formation or you're getting counters. And that's kind of how the pro RPO run game is, so we've got our work cut out for us.”

“They have really patient backs. (Price), you never know what you're gonna get out of him. He's gonna sit there in the backfield until something opens up and go hit it downhill. He makes nice moves in space,” Texas State freshman safety Zion Childress said. “But one thing I've noticed is, once their backs get in space and get going, they're gone. Once they get into the open field, they're trying to score. So that's gonna be a good matchup this week to see how we tackle in the open field.”

The Bobcats travel to Miami to take on FIU on Saturday at 6 p.m. inside Riccardo Silva Stadium. It’ll be the first-ever meeting between the two schools. Jake Spavital said his team is ready to get back into the win column.

“I think the kids are in a good spot. They're ready to get back out and redeem themselves this week as we have a tough road opponent in FIU,” the head coach said. “It's the first road test for us and we gotta continue to get healthy, continue to improve and I think we're excited to get back out there Saturday and play.”