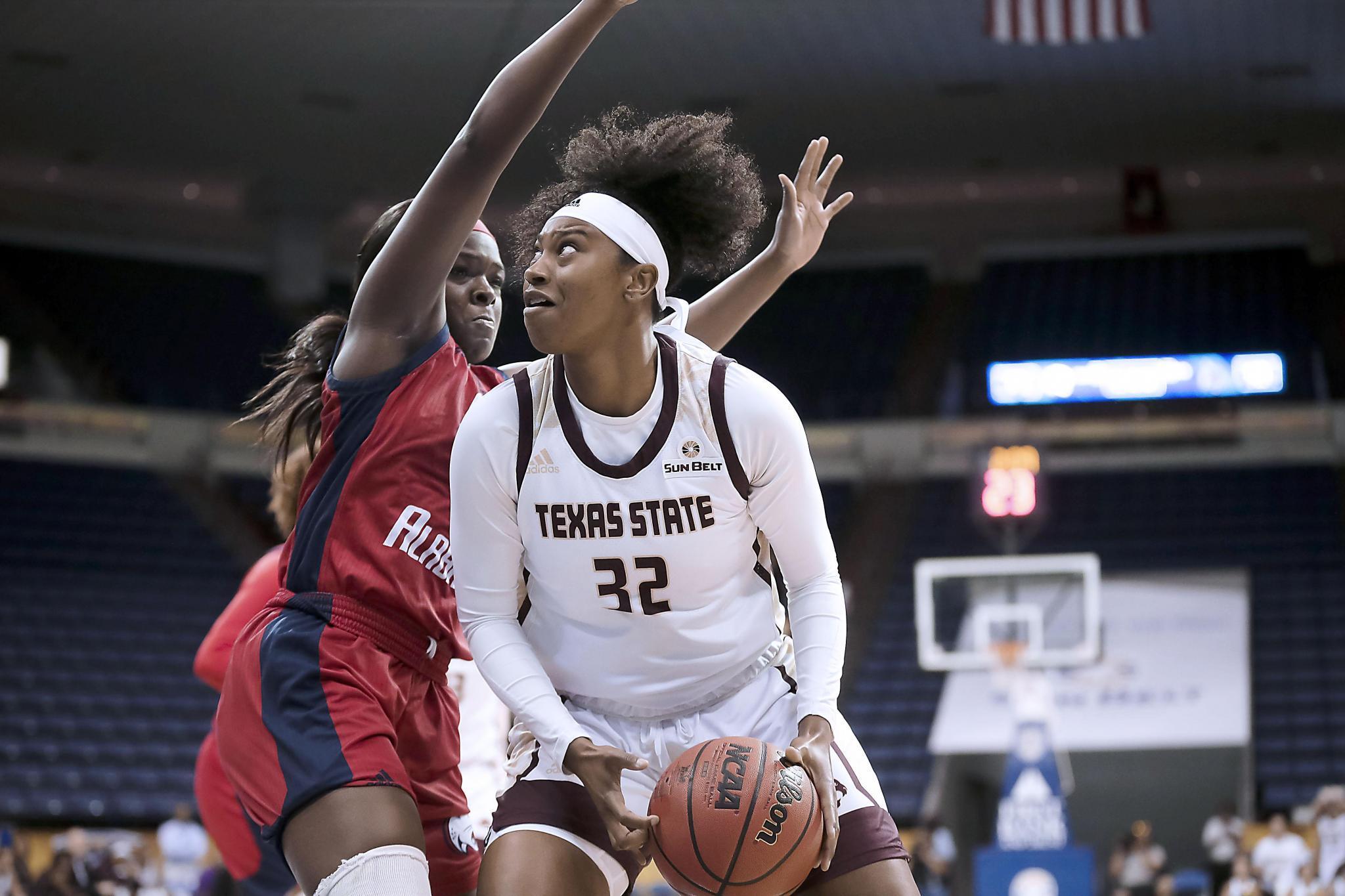 For the first time in a long time, the Bobcats need their posts to get buckets.

Texas State’s teams have largely leaned on its guards to lead the offense under head coach Zenarae Antoine. In her eight years at the helm, just two forwards have averaged double-digit points in a season: Ashley Ezeh and Erin Peoples. Peoples was the most recent to do it, posting 13.5 points per game in 2014-15.

But with former guard Toshua Leavitt, who led the team last season averaging 16.7 points, no longer on the roster after graduating, the maroon and gold will have to look to score from all angles.

The Bobcats will still see heavy output from its guard play, namely Brooke Holle. The senior has seen double-digit scoring and finished second on the team in rebounding each of the past two seasons, starting in all but two games during the stretch.

Holle did struggle moving up from the No.3 to No. 2 option on offense, though. Her scoring total dropped from 11.7 points per game as a sophomore to 10.5 as a junior. Her efficiency tailed off as well, with her field goal percentage falling from .406 to .327 and her 3-point percentage diving from .363 to .295. Holle was named to the 2018 Preseason All-Sun Belt Third Team, but was completely left off the list this year.

Still, Antoine believes Holle can steer Texas State in the right direction as the team’s go-to player and said it’s a mistake to underestimate her.

“To not see her name as one of the top-15 players (in the 2019 Sun Belt preseason teams) was very upsetting. I think Brooke Holle's deserved that opportunity,” Antoine said. “I'm just really disappointed that people don't understand or maybe didn't see or don't have the knowledge and understanding of who Brooke Holle is and what she means to Texas State women's basketball and, overall, the Sun Belt Conference.”

Brooke’s twin sister, Bailey, and freshman point guard Kennedy Taylor should also help facilitate the offense from the perimeter, both players making appearances in all 31 games last season. But the pair combined to average 9.1 points per game, leaving the team with a huge need for scoring.

Forwards Jayla Johnson and Da’Nasia Hood are the best bets to fill in the gap. Johnson and Hood finished third and fourth in points per game last year, respectively, combining for 15.4.

Johnson served as the team’s spark plug off the bench, bringing bouncy energy to Texas State’s second units and toasting defenders with a smooth mid-range game, but missed the final seven games of the season. Hood showed promise as a stretch big, hitting .329 percent from deep her freshman year.

Antoine also mentioned sophomore center Jaeda Reed and junior college transfer Lillie Moore should provide depth down low. The head coach called Reed “unguardable” in the post and said Moore has been strong on the offensive glass in the preseason.

“Arguably right now, (Hood) and Bailey Holle are our best 3-point shooters on the team. They do a great job with it in practice right now, just knocking down tough shots. I think that's going to hopefully stretch the floor out some and open up the inside for us,” Antoine said. “Jayla Johnson's returned, she's been a young woman who's been very inconsistent, but probably consistently extremely talented. Jayla is a matchup nightmare, I think, for a lot of people.

“So I think her consistency and us working with her, as well as some of the youngsters we have, they're really good at scoring back-to-the-basket. Them getting where they need to be basketball-shape-wise, we're going to be pretty tough, honestly, inside.”

Antoine said this year’s squad reminds her of the 2011-12 Bobcats, Antoine’s first team as a head coach. Texas State finished 17-14 overall, going 8-8 in Southland Conference play and reached the second round of the league tournament.

These Bobcats will see tougher competition — the Sun Belt jumped from 22nd in conference RPI two years ago to 12th last season, per WarrenNolan.com — but the maroon and gold could see similar results.

“We have more balanced scoring, we truly have an inside presence this year, we have some post players who can score. And I think that's exciting because we look different,” Antoine said. “You know, I went from Diamond Ford to Ayriel Anderson, Ayriel Anderson to Taeler Deer, Taeler Deer to Toshua Leavitt. Just prolific scorers. We have Brooke Holle, who's a great scorer in her own right, but as far as big numbers, First Team all-conference kids, I don't think that that's what we see in this team. What I see is a little bit more balance with strong leadership coming out of the Holle twins.”

Texas State will look to improve on its 14-17 overall record and 9-9 Sun Belt record in 2018-19, tipping the new season off inside Strahan Arena against Texas Lutheran on Tuesday at 5:30 p.m.