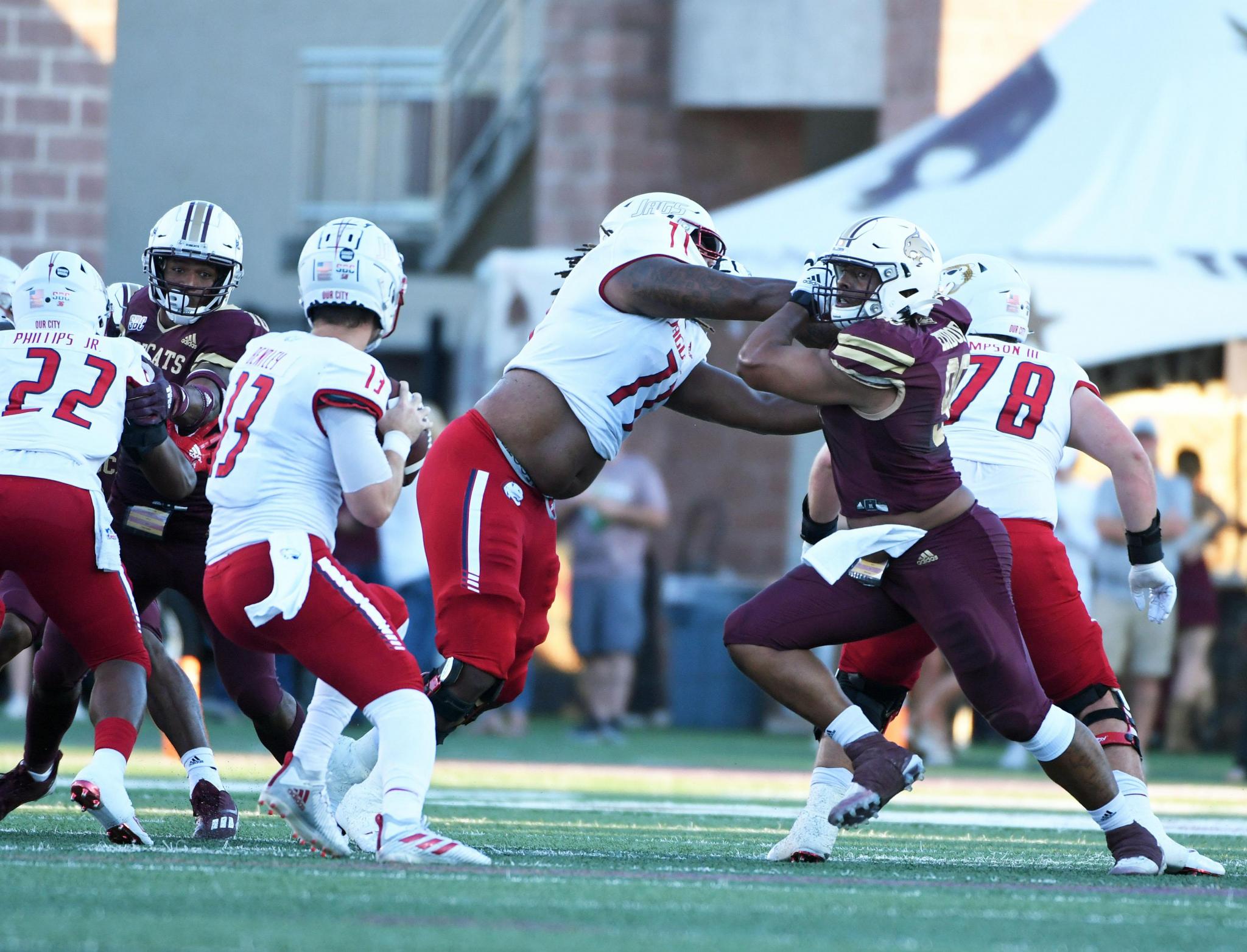 Brady McBride is pretty unshakeable in general. The quarterback didn’t get overly hyped after launching a 57-yard touchdown to junior wide receiver Javen Banks. And he didn’t get too worried after throwing two interceptions — those were just slip-ups.

His third pick, though? That one got to him. South Alabama scored on every turnover McBride threw, going up 17-7 over Texas State at halftime during Saturday’s game inside Bobcat Stadium. McBride can’t even remember the play. He had to block it out of his mind because of how frustrated he was with himself.

But before he lost his confidence, his teammates lifted him up. They still believed in him. The team’s defensive players said they had his back and the offensive players told him to keep pushing.

That’s what it took for the Bobcats to beat the Jaguars. McBride led a 14-point fourth quarter comeback and helped put South Alabama away in quadruple overtime, 33-31.

“That really meant the world to me,” McBride said. “And so from then, I just started a new second half.”

Head coach Jake Spavital didn’t lose faith in him, either. Spavital said that had the picks been “pretty bad,” he would’ve considered moving in another direction at quarterback. But he didn’t think that was the case. They were miscommunications for the most part. So he kept riding with the redshirt sophomore into the third quarter.

Spavital’s been preaching to his players to focus less on the last play and more on the next one. McBride embodies it.

“That kid has a short-term memory and I knew he was gonna be fine,” Spavital said. “You know, he doesn't get rattled with this stuff, he understands that he's got to take care of the ball a little bit better. And then he gets frustrated with that but like, there was no hesitation because I was pretty sure that he was gonna make some plays.”

Texas State’s defense started turning the tide. Graduate safety Troy Lefeged Jr. picked off Jaguars graduate quarterback Jake Bentley on the first drive of the second half. The visitors were held to a three-and-out on their next drive.

The Bobcat offense moved 38 yards on the next series to the South Alabama 18-yard line but were nearly knocked out of field goal range after a holding penalty. But McBride picked up seven yards with a quarterback keeper on 3rd and long to set up a 43-yarder from redshirt sophomore kicker Seth Keller, cutting the deficit to 17-10.

The Jaguars (3-2, 0-2 Sun Belt) reached the end zone less than a minute into the fourth quarter to go back up by two scores, 24-10. Texas State’s offense went three-and-out, giving USA a chance to put the game away. But two plays later, South Alabama junior running back Bryan Hill took a handoff, then turned around and pitched the ball backward, attempting a flea-flicker. Texas State sophomore defensive lineman Samuel Obiang caught the ball though, setting the hosts up on their opponent’s 41-yard line.

The maroon and gold went on a nine-play drive that ended with a 13-yard touchdown pass from McBride to junior wideout Marcell Barbee.

“I think everybody's doing their job and playing full-speed,” senior defensive lineman Caeveon Patton said. “The last couple weeks, it hasn't been ‘Bobcat defense.’ You know, it's just simple stuff. So we had to fix the mistakes and everybody doing their job, getting on the same page.”

The defense forced another stop on the Jaguars’ last drive of regulation. With 3:17 left on the clock, the Bobcats reached the red zone after two runs for 51 yards from redshirt freshman tailback Calvin Hill. Sophomore running back Jahmyl Jeter punched into the end zone six plays later, tying the game at 24-24 with 17 seconds remaining. South Alabama took a knee on their next possession, sending the game into overtime.

Bentley tossed a 12-yard score to the conference’s receiving yards leader, junior Jalen Tolbert, in the first period. Texas State matched it with a 4-yard touchdown run by sophomore running back Brock Sturges.

However, the hosts were stood up on offense in the second overtime, and Keller’s 25-yard field goal doinked off the right upright — his first miss since Oct. 10, 2020, almost exactly a year ago.

USA redshirt freshman running back A.J. Phillips picked up four yards on the next two plays, then took a third-straight handoff to put the team into position for a game-winning kick. But redshirt senior linebacker Markeveon “Binky” Coleman knocked the ball loose and senior linebacker Sione Tupou recovered it to keep the game alive.

Under new NCAA rules, the remaining overtime periods would consist solely of 2-point conversions. Tupou swatted a pass from Bentley to keep the Jaguars off the scoreboard. McBride came up an inch short on a draw play, but ran it again and crossed the goal line in the fourth OT to go up 33-31.

South Alabama had two tries to tie it after Texas State was flagged for pass interference on the first play, but Bentley missed on both passes, sealing the maroon and gold victory.

“I gave everybody the game ball just because I thought that was just resiliency and just where we're at as a program. I thought that was a great opportunity for the whole team because a lot of kids made plays,“ Spavital said. “(McBride) was the guy that everybody wanted to have the game ball in the locker room because he fights, man. He fights and he helped win us that game.”

Tupou led the defense with 14 tackles, forcing one fumble and recovering another. Coleman followed with nine stops, 1.5 of them for a loss. Obiang put up a team-high 2.0 tackles for a loss and teamed up with sophomore defensive lineman Jordan Revels for a sack.

The Bobcats now lead the all-time series with the Jaguars, 4-3, with the home team winning every game. Spavital improved to 3-1 in overtime games as a head coach. Five games into the season, the maroon and gold already have as many wins this year as they did in 2020.

“I felt like a little bit in the past, people just play to not get the blame put on them,” McBride said. “And I felt like this week was different because it was to win. That was our one goal, like, mind consumed with winning. I really felt like that took effect out there.”