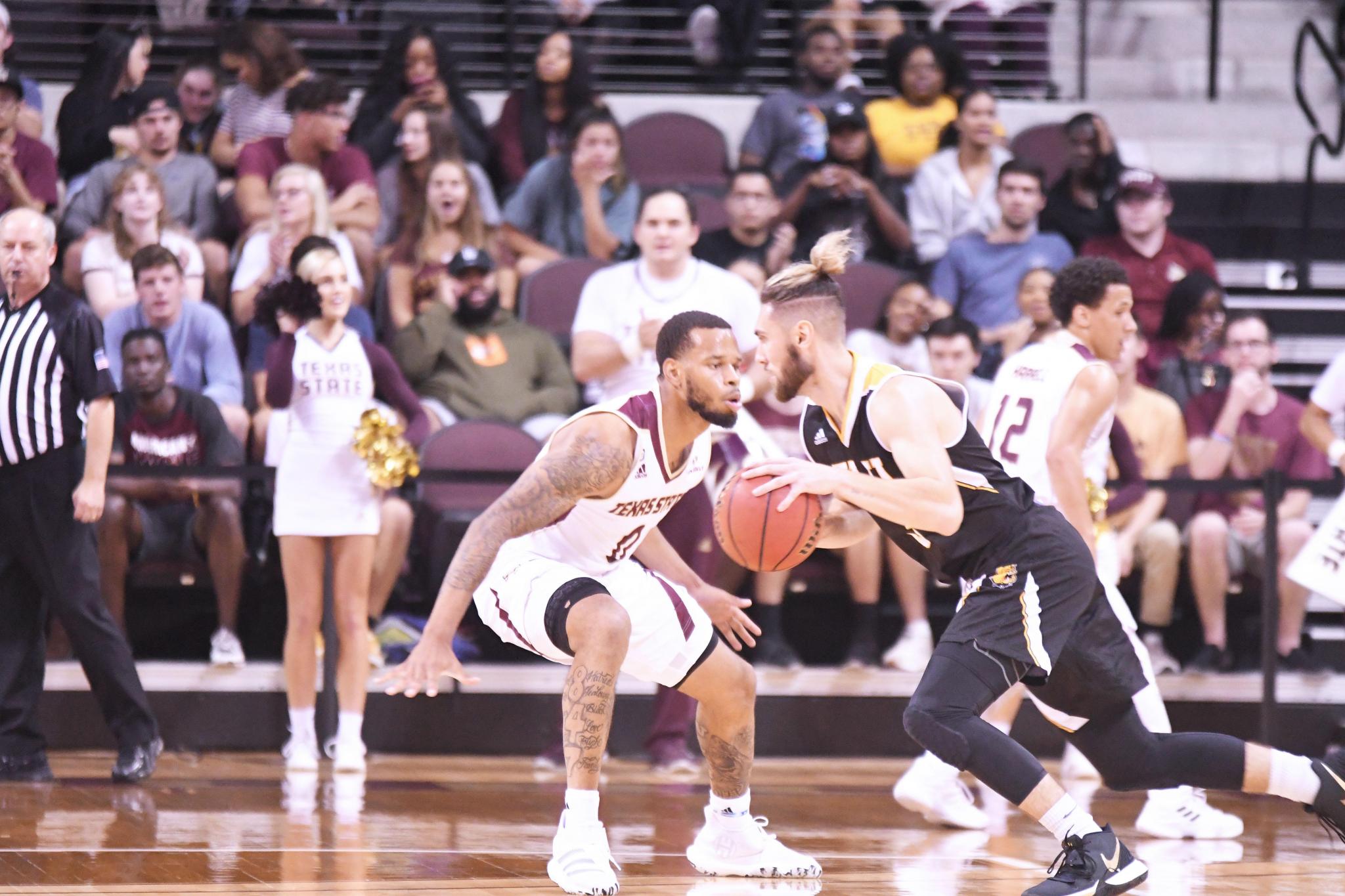 The Panthers won the Southwestern Athletic Conference tournament last season and  were one of the First Four teams in the NCAA tournament in March. They also posed a stylistic challenge as one of the fastest-paced teams in the country, ranking 50th in the NCAA in Ken Pomeroy’s adjusted tempo rating. Texas State ranks 309th.

“I think the (PVAMU) does a heck of a job coaching. You know, he spreads you out. I think that they are an outstanding offensive team,” Kaspar said. “They have some good players and they have some good people from last year's NCAA tournament team. And I thought that they, as evidenced by Saturday night (when the Bobcats lost at Air Force, 78-71), that they could come here and beat us.”

The head coach’s worries were wiped away early Tuesday night, as Texas State led Prairie View (1-2) wire-to-wire in a 75-48 win inside Strahan Arena.

“I consider this a very good victory for our team,” Kaspar said. “I was very pleased with our defense. We seemed to struggle a bit at the end. And we gotta do a better job of taking care of the ball pressure, full-court pressure. And I don't know, we seemed a little out of sync offensively — though, I think defensively, we were pretty good.”

The Bobcats began the game building a nine-point lead, in large part due to two of their newcomers. Junior guard Deshawn Davidson opened the game with a corner 3-pointer. Junior forward Isiah Small grabbed a defensive rebound on the next possession, brought the ball up the floor, then ran a give-and-go with senior center Eric Terry for a right-handed layup.

The Panthers clawed back to cut the score to 9-8, but Davidson kept the hosts ahead with another triple on a fastbreak. Small pushed it the lead to nine two trips later with his first trey of the season.

By the end of the first half, Davidson was second on the team with 11 points and Small had a quintuple single with at least one point, rebound, assist, steal and block. The pair said they've seen their chemistry improve with the team.

“For me, I ain't even gonna lie, it's been rough,” Davidson said. “But Coach Kaspar does a great job of preparing us, so it's making it a little easier. But just the speed, the little things, I'm adjusting to. So it's definitely been kind of tough for me. But I'm starting to feel better each day, each game, practice-by-practice.”

“At first, it was a little uncomfortable,” Small said. “I wasn't playing like how I was in (junior college). I'm used to having the ball and popping out. But now, I have to have the ball on the wing. So it's basically like I'm a point guard but it's like, I just gotta play more aggressive and stuff. But I'm getting used to it day-by-day.”

Texas State began the second half up 43-28 but was met with a full-court press by the visitors. The maroon and gold struggled to navigate it, committing three turnovers and shooting just 2-7 from the field in the opening five minutes.

Still, Prairie View could only trim the lead to 13 points, unable to crack the Bobcat defense. Texas State pulled away with a 12-0 run, then took the game, 75-48.

Kaspar was glad his team bounced back from the early-season loss.

“Our guys, I don't think, were quite ready to play that game (against Air Force). It definitely was a winnable game. And tonight, we were ready to play,” Kaspar said. “I want to thank the students behind us, the students were outstanding tonight. And I thought they did a great job of lifting us up, helping us win the game.”

Sophomore guard Caleb Asberry was held out for the second game in a row with a concussion. Fellow sophomore guard Mason Harrell exited Tuesday’s game early with a left shoulder injury. Kaspar expects both players to be available when Texas State (2-1) battles No. 24 Baylor (1-1) in Waco on Friday at 8 p.m.