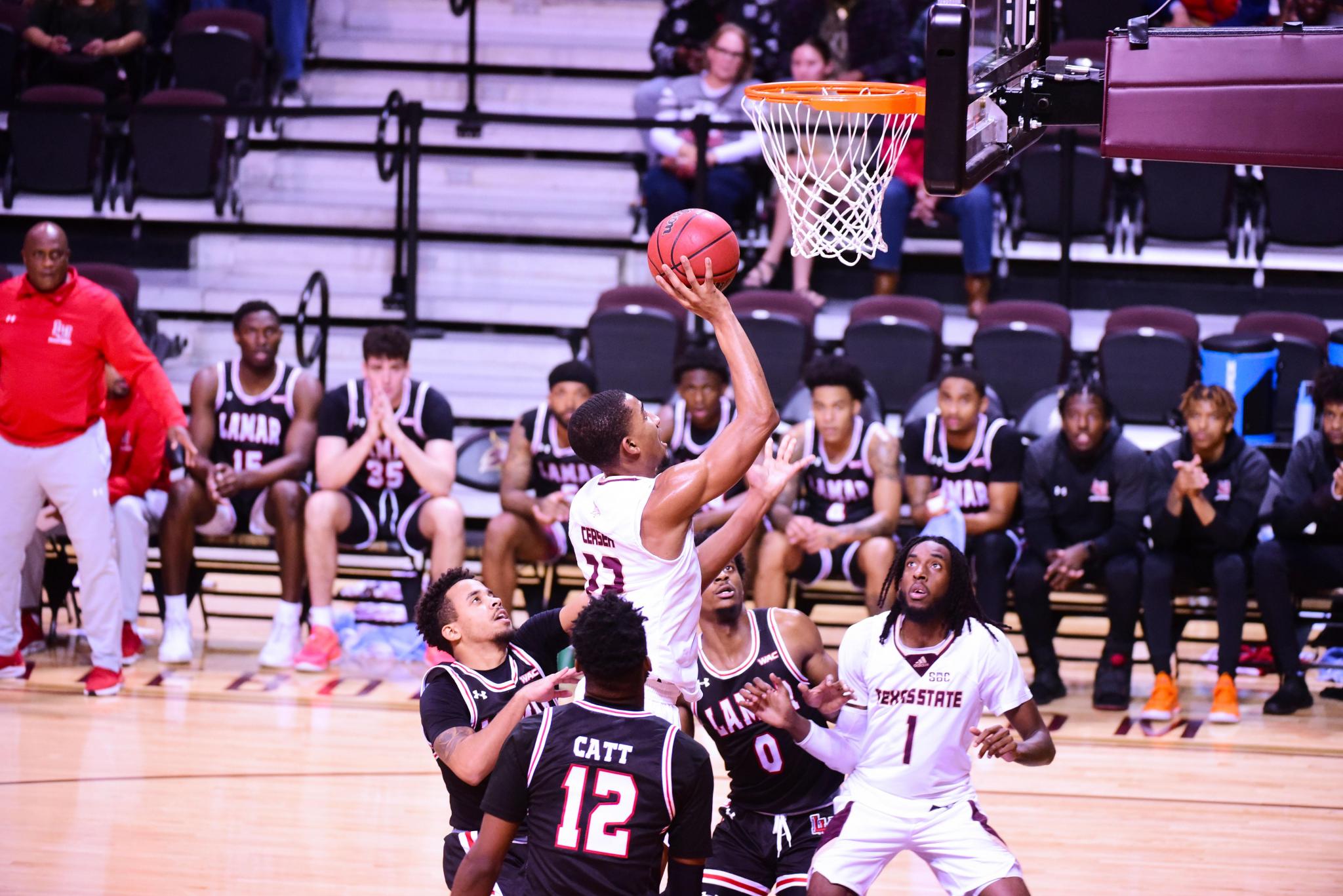 Texas State Men’s Basketball has played one game in the past 21 days.

It’s been for good reason — a product of the safeguards put in place to protect players and staff from COVID-19 and its variants. But it’s also been somewhat unexpected. The Bobcats took a needed one-week break after their non-conference slate to rest and prepare for Sun Belt play. When they returned, five players, including two starters, were ruled out for the team’s home game against Troy on Dec. 30, resulting in a 78-63 loss. Texas State’s next three games were all canceled with the team unable to meet the minimum threshold of seven players and one full-time coach available that the conference requires to play.

Head coach Terrence Johnson knew to expect the unexpected with the effects of the global pandemic still lingering heading into this season. But it was impossible to know exactly when and how the program would be affected. It wasn’t something Johnson could prepare for.

The Bobcats had to accept it was out of their control.

“It's been a challenge but you know, every season has its own challenges and trials and tribulations,” Johnson said. “So I'm hopeful that this is something that we can look back on at the end of the season and say this was one of the turning points of our season.”

Johnson said those who were available did what they could while other members of the team were in the health and safety protocol, studying film and getting up shots. He’s hopeful it’ll translate to wins as Texas State ramps itself back up to play the remainder of its schedule, but it could take some time.

Some of the maroon and gold’s players are still questionable to return this week, needing to be cleared by the school’s medical staff. Those that are returning will need time to condition themselves back into playing shape and find their rhythm.

One of the most difficult parts, Johnson said, has been not knowing who will be at practice each day.

The next steps for the Bobcats come in the form of Louisiana-Monroe and Louisiana in a pair of home games this weekend.

ULM has looked much improved this year, already eclipsing the seven wins they posted in the 2020-21 season. The Warhawks have five players averaging double-digit points each, led by graduate guard Andre Jones scoring 13.3 points per game. The team dealt with some COVID issues of its own in the first two games of conference play, losing to Coastal Carolina and Appalachian State, but recovered for a win over Little Rock last Thursday and held an 11-point second-half lead against Arkansas State on Saturday before allowing the Red Wolves to come back.

Johnson also noted that ULM should be well-prepared for this particular matchup as Alex Hausladen, who served as Texas State’s Director of Basketball Operations for eight years, joined the Warhawks in the offseason as an assistant coach.

“I know that they're going to come here focused on trying to take advantage of some of the things they let kind of slip away last week,” Johnson said. “(Head coach Keith) Richard does a super job of preparing his guys. You know, I'm expecting them to know who we are and know what we want to do … I expect to get Monroe's best shot.”

Louisiana has established itself as the hottest team in the league, earning wins over App State, Coastal Carolina and Arkansas State and posting the best adjusted efficiency margin in the conference as rated by Ken Pomeroy.

“They probably have a legitimate three different starting lineups that they can throw out at any time,” Johnson said. “(Head coach Bob Marlin) has done a really, really good job of assembling a great group of athletes, skill players, and guys that are tough and can compete. So that's always one of the toughest games on our schedule and if we don't come to play, then it won't be fun.”

The Bobcats are eager to return to action after sitting out for nearly a month.

“Our guys are resilient. They're coming back excited and we're happy to have them around,” Johnson said. “The staff is all intact right now and it's good to get back in the gym with the full group here.”