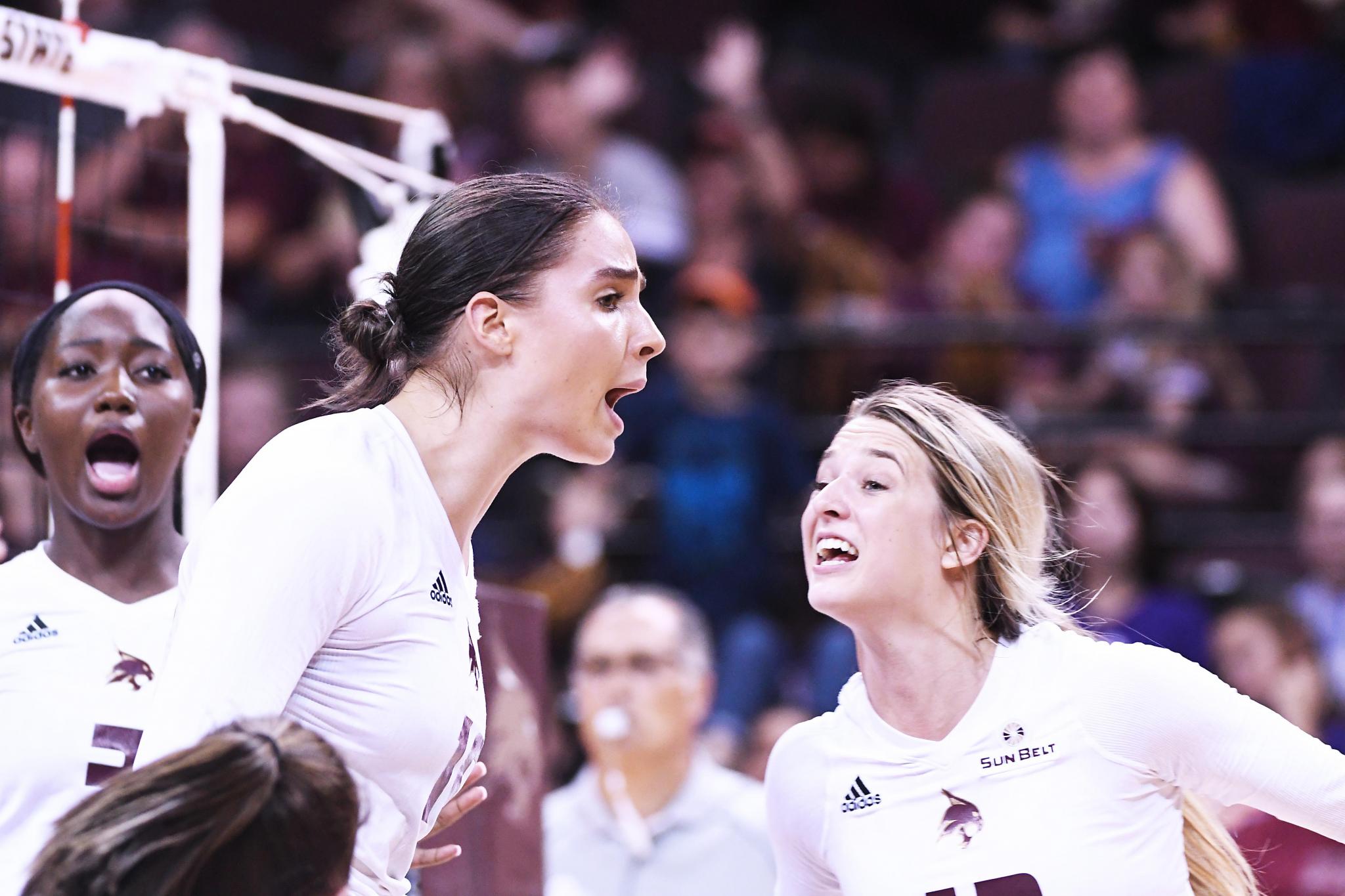 The Bobcats kept getting tooled.

Texas State picked up just five blocks during two wins over Little Rock and Arkansas State on Sept. 28 and 29, respectively. The marks were mediocre for a team averaging 6.9 per game.

The Bobcats’ timing was off, allowing opponents to score off their deflections. They knew they had to get better and have been steadily working on stopping shots at the net since then. Texas State’s focus showed on Saturday, when the team tallied a season-high 15 blocks in a 3-1 victory (25-17, 22-25, 25-20, 25-21) over Coastal Carolina.

“They had big hitters and we had to shut them down, so that’s what we did,” senior middle blocker Madison Daigle said. “Block timing was crucial for us. We worked hard getting off the edge and transitioning. Just working hard in general.”

In practice, associate head coach Tracy Smith dissected the teams blocking scheme. She stood on boxes near the net and repeatedly spiked the ball at the Bobcat defense. It was up to the front line to stop her. The blockers have to jump in tandem at just the right time and altitude to make full contact with the ball.

“The outside hitter and the middle hitter have to connect at the same time and just go as one,” Daigle said. “You can’t be on and off, you have to be pressed over. So, that’s what we focused on, was not getting tooled … And so we broke it down, step-by-step on blocking.”

Texas State set the tone early against the Chanticleers. After falling behind 2-0 to start the game, senior middle blocker Halee Brewer and junior outside hitter Cheyenne Huskey teamed up on a rejection to tie the set.

A 7-0 serving run from freshman outside hitter Sarabi Worsely-Gilbert gave the team an 8-2 lead that it never let go. The Bobcats took the first frame, 25-17.

Coastal Carolina got more aggressive in the second game, causing problems for Texas State. The Bobcats suffered a blocking error and only sent back two shots in the set, their lowest number of the match, and fell 25-21.

The Chanticleers cooled off in the final two frames, though. Freshman middle blocker Jillian Slaughter came up with back-to-back blocks late in the third game to give Texas State a 21-17 lead, and the team held on to win 25-20.

Six Bobcats swatted away four shots in the final set, bringing the team to a season-best 15 total blocks. Texas State took the final game, 25-21, and the match, 3-1.

“We had to focus on this game because Chisum always says, ‘We can’t be 10-0 if we’re not 9-0,’” Daigle said. “So we just focused on that game and scout every team really well. We follow our gameplan for every team and it’s just been working out in our favor.”

Daigle finished the night with a game-high seven rejections. The team has averaged 10.6 blocks per match since the win against Arkansas State, reaching double digits in three of the five occasions.

The victory moves the Bobcats to 18-5 overall and 9-0 in Sun Belt play and extends their win streak to 13 matches. The loss drops Coastal Carolina to 6-9 and 5-2.

Texas State will look to continue its sweep of the Sun Belt Conference on Friday when the team travels to play South Alabama at 6:30 p.m.

“We can’t overlook anyone. Last year, South Alabama beat us the first game,” Daigle said. “We started off well (this year) and we just have to keep going every game, one at a time.”